Politico – Under the Radar

As a federal judge on Monday permanently blocked a Kansas law requiring voters to prove their citizenship before registering to vote, she also delivered a rebuke to the law’s main proponent: Kansas Secretary of State Kris Kobach. 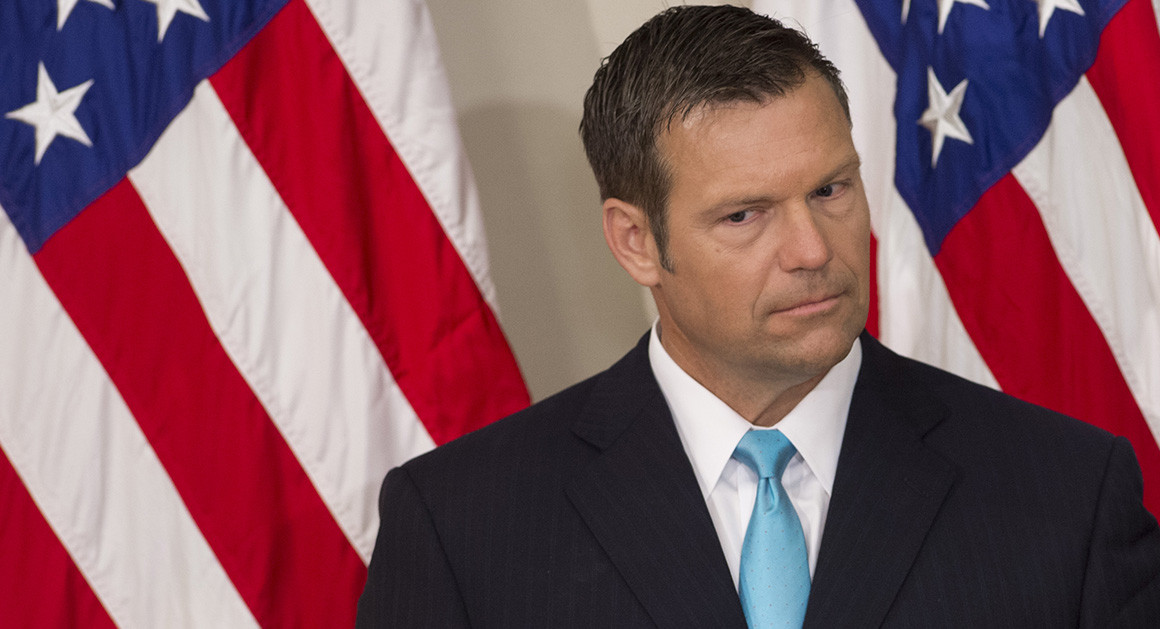 Kansas Secretary of State Kris Kobach found himself in hot water on several prior occasions during the proof-of-citizenship case. | Saul Loeb/AFP/Getty Images

U.S. District Court Judge Julie Robinson’s ruling against the law was widely expected, but she coupled it with pointed complaints that Kobach had failed to comply with court rules requiring disclosure of evidence to the law’s opponents in advance of the trial.

“The disclosure violations set forth above document a pattern and practice by Defendant of flaunting disclosure and discovery rules that are designed to prevent prejudice and surprise at trial,” Robinson wrote. “The Court ruled on each disclosure issue as it arose, but given the repeated instances involved, and the fact that Defendant resisted the Court’s rulings by continuing to try to introduce such evidence after exclusion, the Court finds that further sanctions are appropriate.”

“It is not clear to the Court whether Defendant repeatedly failed to meet his disclosure obligations intentionally or due to his unfamiliarity with the federal rules,” the judge added. “Therefore, the Court finds that an additional sanction is appropriate in the form of Continuing Legal Education. Defendant chose to represent his own office in this matter, and as such, had a duty to familiarize himself with the governing rules of procedure, and to ensure as the lead attorney on this case that his discovery obligations were satisfied despite his many duties as a busy public servant.”

Robinson, an appointee of President George W. Bush, ordered Kobach to do an additional six hours of continuing legal education in the 2018-19 year, above and beyond the ordinary state requirements.

Kobach is currently locked in a tight race challenging incumbent Kansas Gov. Jeff Colyer, who is running for reelection.

Spokespeople for Kobach did not immediately respond to a request for comment on the new ruling.

The American Civil Liberties Union, which brought the suit against Kobach, said the ruling demonstrated that the Kansas official’s actions were unconstitutional.

“This decision is a stinging rebuke of Kris Kobach, and the centerpiece of his voter suppression efforts: a show-me-your-papers law that has disenfranchised tens of thousands of Kansans,” said Dale Ho, director of the ACLU’s Voting Rights Project. “That law was based on a xenophobic lie that noncitizens are engaged in rampant election fraud. The court found that there is ‘no credible evidence‘ for that falsehood, and correctly ruled that Kobach’s documentary proof-of-citizenship requirement violates federal law and the U.S. Constitution.”

Kobach found himself in hot water on several prior occasions during the proof-of-citizenship case. Last June, a federal magistrate fined Kobach $1,000 for presenting misleading arguments in the suit. And in April, Robinson held him in contempt for failing to send standard registration postcards to voters covered by a court order she issued.

Robinson’s new ruling on the law itself found that Kansas had failed to demonstrate that voting by noncitizens was a significant problem and failed to show that the law was necessary to remedy whatever issues existed with such voting.

“The Court finds that the burden imposed on Kansans by this law outweighs the state’s interest in preventing noncitizen voter fraud, keeping accurate voter rolls, and maintaining confidence in elections,” she wrote.

Josh Gerstein is a senior White House reporter for POLITICO.