President Donald Trump is obsessed with his predecessor, according to a number of pundits who believe many of the Republican’s policies are all about “blowing the former president’s legacy.”

Speaking on his CNN show on Saturday, following Trump’s attempt to roll back the Iran deal, Don Lemon asked the question: “Does President Trump have an Obama obsession?” and suggesting the Republican was “making it his mission to undo every last bit of the Obama legacy.”

Political analyst David Gergen told Lemon he believed the recent announcement on the Iran deal, as well as Trump killing Obamacare subsidies, was “more about blowing up the former president’s legacy than anybody wants to admit.” 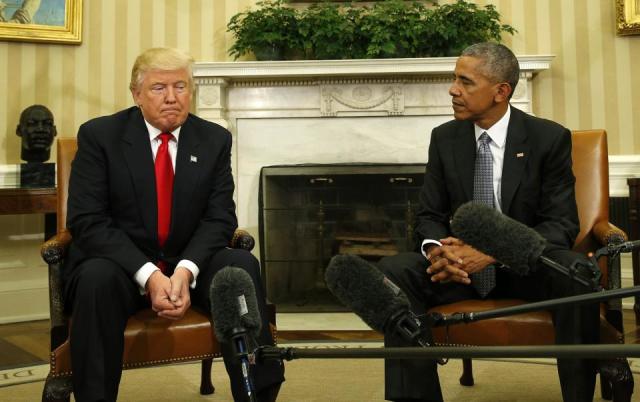 Then-President Barack Obama meets with Donald Trump, who was then president elect, to discuss transition plans in the White House Oval Office, November 10. President Trump got a small bit of good news in the polls, but he’s more than a dozen percentage points behind where Obama was in 2009. Kevin Lamarque/Reuters

“Anything which has the name Obama on it automatically becomes a target for Donald Trump and he’s trying to reverse as much of that as possible,” he added, warning that the tendency of presidents to reverse domestic policy set by their predecessors was now rolling into foreign policy.

Indeed, back in August, a European diplomat reportedly told BuzzFeed anonymously that in his dealings with President Trump, he had noticed the Republican was driven more by a desire to scrap Obama’s policies than to enact his own.

“It’s his only real position,” the diplomat told BuzzFeed. “He will ask: ‘Did Obama approve this?’ And if the answer is affirmative, he will say: ‘We don’t.’ He won’t even want to listen to the arguments or have a debate. He is obsessed with Obama.”

Also over the summer, Trump previously shared a poll that showed he was “a better president of the United States than Barack Obama,” with the unverified results of the poll showing 61% of responders believed Trump was a better president and just 31% backing Obama.

In addition, his actual policy aims, which include his campaign pledge to repeal and replace Obamacare, but also the Iran deal, Trump’s attempt to scrap the Obama-era DACA program, and repeal of federal legislation allowing transgender students to use the bathroom of the gender they identify with, suggest the president may have an eye on targeting Obama’s policies specifically.

Indeed, Obama was the reason Trump was initially propelled into the political sphere; as one of the strong voices of the racially charged birther movement that falsely suggested Obama was not born in the U.S., Trump suddenly found himself speaking about national politics, announcing a run for office several years later.