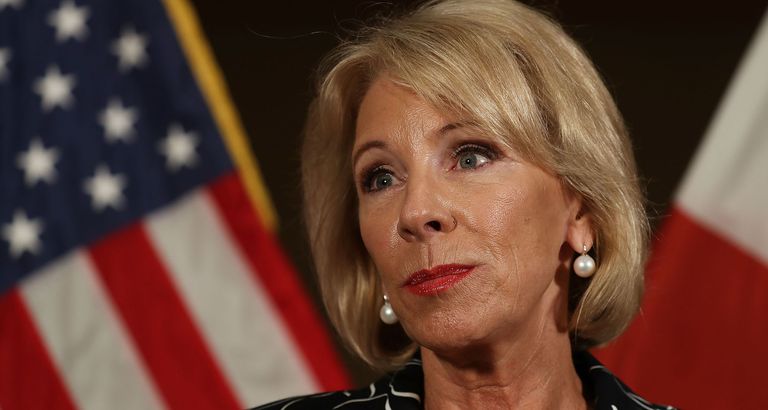 Betsy DeVos was referred to as “the most hated cabinet secretary” by Leslie Stahl on 60 Minutes Sunday night. That was based on the Secretary of Education’s rough-and-tumble confirmation hearings—Vice President Mike Pence’s vote was required to break a Senate tie—and the constant protests that follow her on her visits around the country.

“Most hated” is quite an honor in this administration, which also features the climate-denying Scott Pruitt as EPA administrator. But DeVos is emblematic of Trumpism in its governing form: a member of the plutocratic class with limited expertise but unlimited, entrenched ideology, who attracts the suspicion that she simply bought her influence. At least, that was the opinion of Parkland survivor-turned-activist David Hogg on CNN yesterday.

Stahl’s questioning on 60 Minutes was an effective proving ground for DeVos. On a number of issues, but most prominently school choice, the secretary failed to convince the country of her qualifications. Often, it seemed like she’d just never thought about this before.

Stahl and DeVos started with guns, an issue that still enjoys a sense of urgency despite the NRA and its Republican allies running their post-massacre playbook. DeVos was asked to weigh in on her boss’ plan to arm teachers, which she first grappled with in her confirmation hearings. Back then, she suggested there would be a gun in a school in Wyoming “to protect from potential grizzlies,” which doesn’t seem like a universal issue facing America’s schools. This time was little better:

DEVOS: They want a variety of things. They want solutions.

STAHL: Do you think that teachers should have guns in the classroom?

DEVOS: That should be an option for states and communities to consider. And I hesitate to think of, like, my first-grade teacher, Mrs. Zorhoff, I couldn’t ever imagine her having a gun and being trained in that way. But for those who are—who are capable, this is one solution that can and should be considered. But no one size fits all. Every state and every community is going to address this issue in a different way.

STAHL: Do you see yourself as a leader in this—in this subject? And what kind of ideas will you be promoting?

DEVOS: I have actually asked to head up a task force that will really look at what states are doing. See there are a lot of states that are addressing these issues in very cohesive and coherent ways.

That “task force” is a commission established by President Trump. As an activist with Everytown USA, a gun-violence prevention group, illustrated on Twitter, the commission is probably not an honest attempt to find solutions to the gun violence epidemic in this country:

Trump yesterday at a rally in Pennsylvania: “We can’t just keep setting up blue-ribbon committees. They do nothing but talk, talk, talk.”

Trump today: A new commission run by Betsy DeVos will look into raising age limit to buy long guns. There is no set timeline for findings.

But DeVos’ most glaring professional shortcomings were laid bare on more traditional issues facing the education system. DeVos is unshakably committed to the concept of “school choice,” which involves using public, taxpayer money to get public-school students into private charter or parochial schools. When asked her basis for that ideology, DeVos seemed to be short on the facts:

STAHL: But that really isn’t true. Test scores have gone up over the last 25 years.

Things got significantly worse when Stahl asked about DeVos’ home state of Michigan. She and her family have spent huge sums of money to lobby for school choice in Michigan, but DeVos claimed not to know how the state’s public school system was doing.

STAHL: Now, has that happened in Michigan? We’re in Michigan. This is your home state.

STAHL: Have the public schools in Michigan gotten better?

DEVOS: I don’t know. Overall, I—I can’t say overall that they have all gotten better.

STAHL: The whole state is not doing well.

DEVOS: Well, there are certainly lots of pockets where this– the students are doing well and–

STAHL: No, but your argument that if you take funds away that the schools will get better, is not working in Michigan where you had a huge impact and influence over the direction of the school system here.

DEVOS: I hesitate to talk about all schools in general because schools are made up of individual students attending them.

STAHL: The public schools here are doing worse than they did.

DEVOS: Michigan schools need to do better. There is no doubt about it.

STAHL: Have you seen the really bad schools? Maybe try to figure out what they’re doing?

STAHL: Maybe you should.

DEVOS: Maybe I should. Yes.

That’s right: when asked if she visits underperforming schools, the U.S. Secretary of Education’s answer was: never on purpose. This is an advertisement for what the Trump administration is all about. The data, the studies, even in-person observation—any way that we have of verifying whether a policy has worked or will work—are all irrelevant.

DeVos believes, deeply, that privatizing public education is the solution to all our problems. That she believes this, and is rich and influential enough to put her ideas into practice, is all that matters. The president’s thought processes are frequently an inversion of the scientific method, where his staff’s resources must be marshaled to find evidence to justify his ideology. It appears that ethos extends to his cabinet. DeVos championed school choice for years in her home state, and public schools there are now doing worse, but that has not impacted her calculus at all. The solution remains more school choice, just as the solution to gun violence is more guns.

The interview also exposed further downsides to having a (white) billionaire who never visits poorly performing schools as Education Secretary. One is that DeVos seems almost completely oblivious to the fact that whites and students of color are disciplined differently in schools—particularly, that misbehavior from black students is more frequently met with punishment that’s escalated to suspensions or even the criminal level, which then serves as a blemish on their record as they seek higher education or employment.

STAHL: That’s the issue: who and how the kids who disrupt are being punished.

DEVOS: Arguably, all of these issues or all of this issue comes down to individual kids. And—

DEVOS: —it does come down to individual kids. And—often comes down to—I am committed to making sure that students have the opportunity to learn in an environment that is conducive to their learning.

STAHL: Do you see this disproportion in discipline for the same infraction as institutional racism?

DEVOS: We’re studying it carefully. And are committed to making sure students have opportunity to learn in safe and nurturing environments.

This idea that racism is about individual interactions is foundational to modern conservative thought. It is also wrong. As Stahl points out, institutional racism is the more pressing issue in our society, as it is responsible for unequal treatment by law enforcement, the courts–and yes, schools. It’s not about an individual teacher’s prejudice, it’s about training and social conditioning that leads to subconscious bias. And it’s not about an individual kid’s behavior—as Stahl mentioned, this is about different punishments for the same offense. Like it or not, the color of the misbehaving kid’s skin matters. This might be lost on someone like Devos, who in a speech called historically black colleges “pioneers” of “school choice.” Historically black colleges were established because black students were shut out of other schools because of their race. There wasn’t much choice involved.

Devos never attended nor worked in any public school herself, and the evidence is fairly conclusive that she does not even believe in the concept of public education. In fact, she once called public education “a dead end.” Why else would she propose massive cuts to her own department? One answer, of course, is that she is a member of Donald Trump’s cabinet—which does not necessarily involve making sure your department is delivering better services to the public. But it does involve putting your pet ideology into practice, consequences be damned—if they’re even acknowledged at all. Long live the kakistocrats.