As flooding from Hurricane Harvey continues to rise and spread, officials are warning thousands of Texans to avoid the water.

Floodwaters act as sponges for hazards. As they bubble past city streets and inundate cars and homes, they collect sharp objects, sweep up insects and wildlife, and gather human waste.

But staying out of the water is easier said than done.

Just before she was rescued at around 4 a.m. on Sunday from Harvey, 17-year-old Maya Wadler watched as brownish-gray floodwaters “bubbled up from the doors, seeped in from the windows,” she told the New York Times.

Chris Van Deusen, a spokesman for the Texas Department of State Health Services, told NPR that although his group was advising people to avoid floodwaters, “of course, people have had to be in the water — they haven’t had a choice.”

The Environmental Protection Agency warns that floodwaters can pull in raw sewage as well as industrial chemicals and solvents. It urges anyone exposed to frequently wash their hands and ensure children don’t play in it.

“Floodwater mixes with everything below it,” Richard Bradley, the chief of emergency medical services and disaster medicine at the University of Texas’ McGovern Medical School, told Time. “If it covers a field with pesticides, it picks up the pesticides. It can also carry animal waste from fields and forests.”

One concern is tetanus, an infection caused by bacteria in soil, dust, and manure that can enter the body via a cut or puncture wound. When the bacteria enter the body, they produce a poison that causes painful muscle contractions. These can cause a person’s neck and jaw muscles to lock, hence the other name for tetanus: lockjaw.

The Centers for Disease Control and Prevention typically recommends adults get a tetanus booster shot every 10 years. Because of Harvey, Texas health officials are urging people to make sure they’ve had theirs, NPR reported. They are also sending supplies of the vaccine to the affected areas.

“The bacterial count in floodwater is extremely high,” Bradley told Time. “The chance of getting a skin infection is really quite serious.”

Another risk is wildlife, as snakes, insects, and other wild animals can be drawn to the water or swept up in it.

“Storm activity definitely increases the potential for snakebite as the snakes get flooded out and seek higher ground,” Bryan Fry, an expert on venomous snakes at the University of Queensland in Australia, told the Washington Post.

The dangers don’t necessarily subside once the storm ends, since stagnant water poses risks of its own. Wet environments in houses and buildings are ideal for mold. In the wake of Hurricane Katrina in 2005, close to half of all inspected homes had visible mold, according to the CDC. Mosquitoes and other pests are also attracted to still water.

Regardless of where you are, the ways to keep yourself safe are the same: ensure you’ve gotten your vaccinations, wash your hands frequently, and let your doctor know if you have any cuts or open wounds that have come into contact with potentially dangerous water. 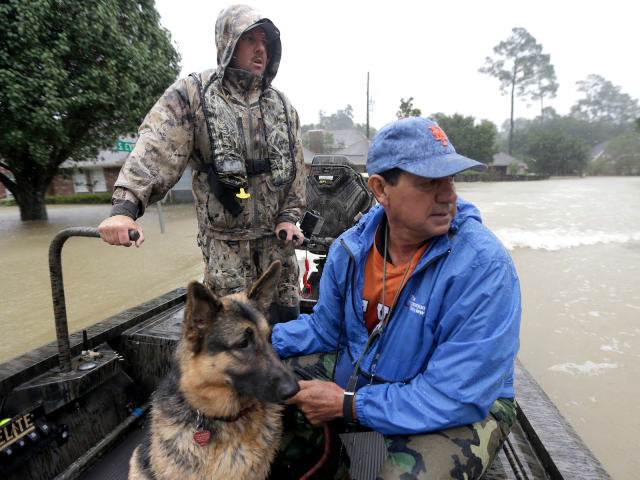 (Floodwaters act as sponges for hazards. As they bubble past city streets and inundate cars and homes, they collect sharp objects, sweep up insects and wildlife, and gather human waste and chemicals from industrial plants. David J. Phillip/AP)