Skip to content
Something amazing is happening in American politics. Wow it felt good, and weird, to type that sentence. Not sure if you noticed, but it’s been kind of a hellish shitshow recently.Anyway… On Tuesday 13th November 2018, a group of young climate activists descended on the office of Nancy Palosi, expected to lead the Democrats in the US Congress. They were demanding that she set up a special committee to create a proper climate action plan for the country – a Green New Deal.They were joined by Alexandria Ocasio-Cortez, a new rising star in the Democrats – more on her later – who hasn’t even officially taken her seat yet, but who dropped in to show her support of this demand on her new boss.

There’s a lot to unpack here, and we’re going to dive in to the details. But first I just want to give a shout out to David Roberts, one of my favorite climate journos, who wrote this fantastic piece about this. I am going to be drawing on his article quite a bit for the first few sections of this post. You should totally read it too.

A Green New Deal – what now?

These young climate activists and Alexandria Ocasio-Cortez are calling for something called a Green New Deal – a vast policy package with the aim to address climate change by decarbonising the US economy while addressing economic injustice, creating good jobs, investing in much-needed infrastructure and public services. Read this to see for yourself how eye-poppingly ambitious it is. We’re talking 100% renewable power and a slew of other goals.

The idea of a Green New Deal has been kicking around in environmental circles for years, and has long been championed by the US Green Party. But in just the last week, this is by far the most mainstream attention I have ever seen this idea get. It’s been discussed or at least mentioned on TV channels from Fox News to Russia Today, it’s been in many of the major national newspapers. As far as I know, this level of attention is unprecedented.

As the name suggests, the idea draws on the New Deal that President Roosevelt used to deal with the Great Depression. It’s basic Keynesian economics – essentially when the economy isn’t doing well, the government can fix it by spending a hell of a lot of money on useful stuff like infrastructure and research, which creates economic demand in the short term and higher productivity in the long term.

The ‘Green’ bit re-purposes this idea to be about retooling the economy to get off fossil fuels.

This most recent iteration of the concept is a little different because the US economy is not doing badly in terms of GDP – it’s actually growing. However most of that extra growth is only benefiting the rich, while ordinary Americans struggle. So the Green New Deal is more about economic justice than growth – good jobs paying living wages, public healthcare and education, affordable housing.

Alexandria Ocasio-Cortez, part of a movement

You may well have heard of Alexandria Ocasio-Cortez already, as she’s quickly become very popular in a short space of time. I have been reading up on her lately and I’m a huge fan. 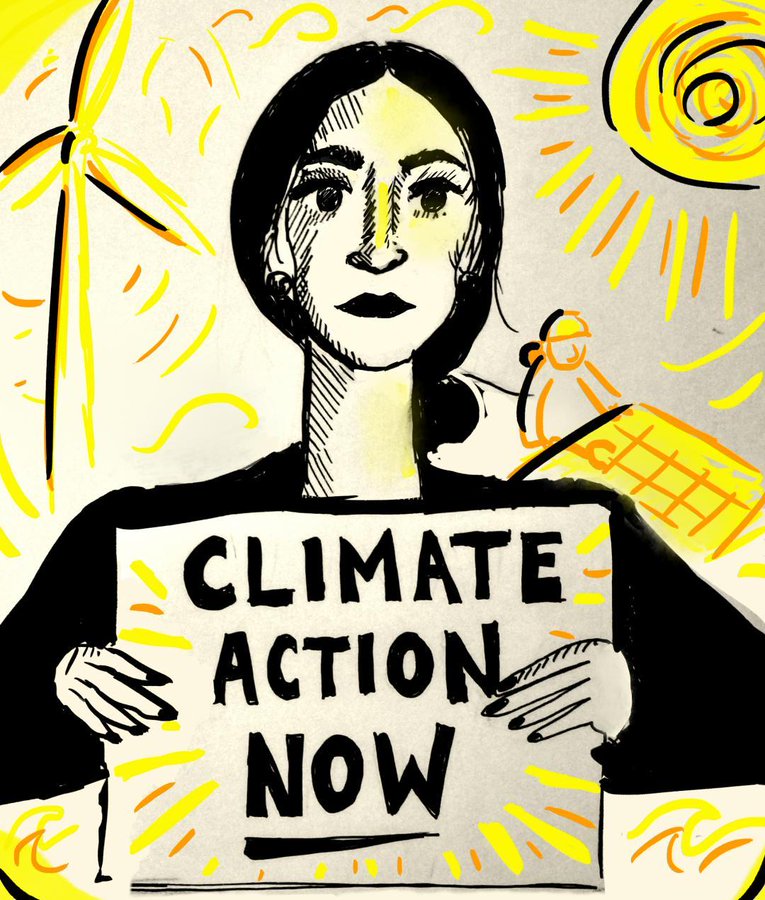 We love this beautiful drawing by @courtsresorts of @Ocasio2018 standing up to create millions of good jobs stopping climate change & transforming society.

We’re urging all members of Congress to join her call for a Select Committee on a #GreenNewDeal. http://jdems.us/gnd

She is the youngest woman ever to be elected to Congress, at 29 years old she is now going to represent the 14th district of New York – covering the Bronx and part of Queens. She caused waves when she ran for the primary against Democrat old-timer Joe Crowley and won, after he had held the seat for ten terms.

She is very progressive – a self-described democratic socialist, clearly very passionate about social justice and environmental issues including climate change.

She is half Puerto Rican and she comes from a working class family. She ran an incredibly impressive grassroots campaign – didn’t take any money from corporate donors and had a passionate army of volunteers and small donations from ordinary people. Such a feat is almost unheard of. She won by focusing on the issues that her community cares about, running a positive campaign rather than making it about Trump. Central to her winning strategy was reaching out directly to the disengaged and disenfranchised who don’t normally vote, because politicians don’t normally speak to them.

She has a degree in Economics and International Relations and is incredibly intelligent and articulate and comes across as refreshingly genuine, with wheelbarrows of charm.

For you British readers – think Jeremy Corbyn, except a young Latina woman and more charismatic and even more progressive – and fresh, without the inevitable baggage of having been in politics for 35 years. But her democratic-socialist principles, her authenticity, being elected on the back of a grassroots movement – in those ways she’s very similar.

Even more exciting – she’s not alone, she’s part of a movement.

The new intake of Democrats from the recent mid terms is the most diverse ever, with more women than ever, historic numbers of people of colour, other minorities, as well as teachers and scientists running and winning. Many of these won on very progressive platforms and are bringing a much needed new energy into the stuffy and corrupt world of politics.

A organization called Justice Democrats is recruiting, training and campaigning for Democrat candidates who back their platform of progressive policies.  Alexandria Ocasio-Cortez (or AOC for a cool abbreviation) is one of seven new Congress members they helped to elect in 2018.

And the climate activists who were demanding a Green New Deal? They are from a group called Sunrise Movement, a group of young people campaigning for climate justice, green jobs and the transition to a zero carbon economy.

We need strategy, not ideas

What AOC, Sunrise Movement and Justice Dems are doing here is actually very strategic. They aren’t just having a protest to demand a Green New Deal. That would raise awareness and get the idea talked about, but essentially not much else. Democrats now control Congress but Republicans have the Senate and the White House. And most mainstreams Dems aren’t even that concerned about climate action anyway. Even if they were, they have zero hope of passing this incredibly radical policy package at the moment.

But the demand isn’t actually for a Green New Deal itself. Here’s where it gets a bit ‘policy wonk’ so stick with me. This is interesting I promise.

The actual demand is for Democrat leader Nancy Palosi to set up a special committee. This would have a specific mandate to spend two years building out a proper detailed plan for how to implement a Green New Deal, and then in 2020 when the next election rolls around, this time the big Presidential one, they would then have the plan ready for their campaign, and ready to implement if and when they win. And now that Democrats have control of Congress, Palosi has the power to set up committees – with no approval needed from the Senate or President.

There’s another interesting part to the demand, and that is that this committee would not allow its members to take donor money from the fossil fuel industry. A smart protection against conflicts of interest co-opting it.

So far, they have got ten Congress members to support the proposal, and counting. That’s pretty damn impressive work.

Thank you to @AyannaPressley for becoming the 10th member of Congress to back @Ocasio2018‘s resolution for a Select Committee on a #GreenNewDeal!

Ayanna is fighting for our rights to good jobs and a livable planet. Ask your representative to join her: https://www.sunrisemovement.org/tweet-my-rep

Nancy Palosi herself has expressed some support for it, though hasn’t actually agreed. It’s extremely ballsy for AOC to make such a demand of her before even starting work, and siding with the external activists doing a sit-in was certainly a far cry from the usual wheeling and dealing behind closed doors that politicians usually engage in to get their ideas through.

But with this bold opening move AOC has made a name for herself and pushed ambitious climate action right onto the agenda. Palosi may even need AOC’s support to be elected Speaker of the House, as she can’t afford to lose very many votes.

For a long time, I’ve been saying that the green left needs to stop fixating on great ideas for the end goal and focus more on strategy and tactics. That’s what’s actually happened here. The idea of a Green New Deal has been around for years, getting no where. Only now that it’s being used as part of a smart political strategy is it getting mainstream traction.

Do I think they will get their committee and make their amazing plan and then implement it in 2020 with the US becoming carbon neutral and amazing for working class people by 2030? Um… No. There are incredible obstacles in the way and getting any kind of decent climate or left wing policy through the US system is a colossal struggle – let alone something as radical as this.

But it’s good that this new movement is aiming high with their opening ask, because they will be sure to be haggled down whatever their opening is, even if it’s something that should have bipartisan appeal. By aiming big, they have moved the Overton window and shifted the conversation. A Green New Deal is now something that is within the frame of discussion, which is a significant change.

I’m very excited to see how this develops. If you’re as excited as I am, I suggest following the #GreenNewDeal hashtag on Twitter and following @Ocasio2018, @justicedems and @sunrisemvmt. And I’ll be writing about this more soon!