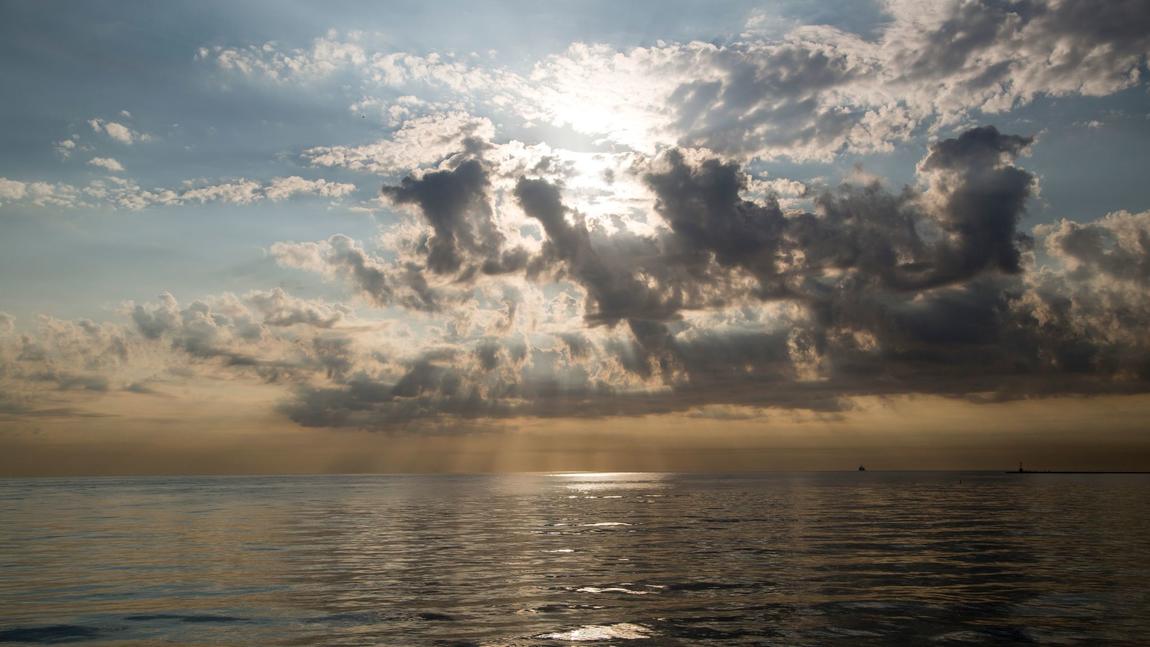 Foxconn Technology Group’s new factory site in Wisconsin lies partially outside the Great Lakes Basin. But it is counting on a steady stream of Lake Michigan water, delivered courtesy of nearby Racine. (Alyssa Pointer / Chicago Tribune)

Great Lakes states are so zealous about guarding their increasingly valuable natural resource from thirsty outsiders that all eight of the region’s governors had to sign off before an inland Wisconsin city was allowed to siphon water out of Lake Michigan.

Less than a year after Waukesha secured permission to withdraw more than 7 million gallons a day from the lake, Taiwan-based Foxconn Technology Group could end up winning access to a similar amount of fresh water for its new Wisconsin factory with merely a stroke of a pen from Gov. Scott Walker, the company’s chief political sponsor.

Foxconn’s bid for Lake Michigan water is the latest test of the decade-old Great Lakes Compact, an agreement among the region’s states intended to make it almost impossible to direct water outside the natural basin of the Great Lakes unless it is added to certain products, such as beer and soft drinks.

At issue with both Waukesha and Foxconn is an exemption that allows limited diversions outside the basin for “a group of largely residential customers that may also serve industrial, commercial, and other institutional operators.”

Waukesha, a city of 70,000 west of Milwaukee, lies fully outside the basin but is within a county that straddles the meandering subcontinental divide that separates areas of the Midwest that drain into the Great Lakes from those where water flows toward the Mississippi River. Foxconn’s plant would be built on top of the divide.

As envisioned by the Walker administration, the water for Foxconn would come from Racine, an industrial city that would add the company to its larger base of residential customers, along with a small number of homes in Mount Pleasant, the community where the factory is to be located. Racine is entirely within the basin and has more than enough capacity from its existing allotment of water from the lake. 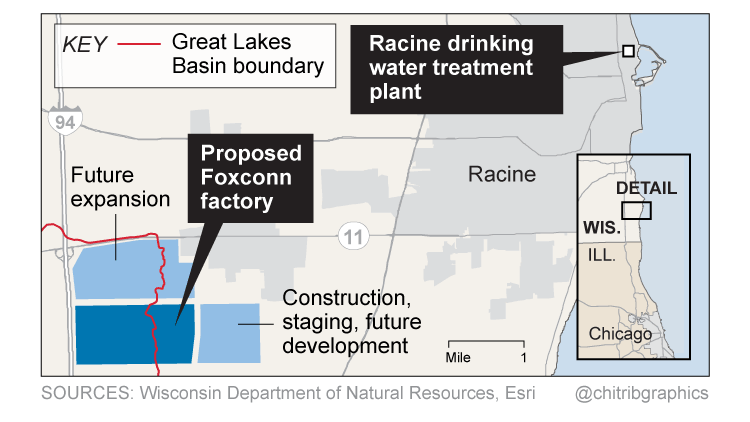 Lawyers, activists and politicians who drafted the compact are split on whether Foxconn’s bid violates the spirit, if not the actual language, of the agreement, which they hammered out in 2008 after an Ontario firm unveiled plans to ship 158 million gallons a year from Lake Superior to Asia.

Though the proposal to fill an armada of supertankers with fresh water never came to pass, it shocked regional leaders who realized that arid, drought-ravaged nations and communities throughout the world might covet the Great Lakes as a potential solution to their water woes.

Some who were involved in the debate hoped the compact would discourage the use of Great Lakes water to fuel suburban growth outside the basin. Instead, the thinking went, access to the water should be limited to new industries and development in areas within the basin, such as Milwaukee, Racine, Kenosha and other older, urban cities ravaged by the loss of manufacturing jobs.

“Access to Great Lakes water is a contentious issue even within states, and we knew southeast Wisconsin would be one of the flashpoints,” said Noah Hall, a Wayne State University law professor who focuses on environmental issues in the region. “We wanted to discourage sprawl, but we made political, perhaps arbitrary, compromises along the way.”

The application to divert water for Foxconn assumes Wisconsin is not required to consult with other Great Lakes states, let alone seek their approval.

“I think you can make a cogent argument they are covered under the compact,” said Todd Ambs, who helped negotiate the agreement as top aide to former Wisconsin Gov. Jim Doyle.

Some critics of the Waukesha diversion plan to question the legality of Foxconn’s bid when the Wisconsin Department of Natural Resources holds a public hearingWednesday. The department also is taking public comments until March 21 and is expected to rule on the application later in the year.

“Every application for Great Lakes water is an opportunity to review the strength of the compact,” said Molly Flanagan, vice president for policy at the nonprofit Alliance for the Great Lakes. “Given the number of unanswered questions about Foxconn’s application, there is no need to rush this.”

Walker’s office referred questions to a spokesman for the Natural Resources Department, who said the agency “has not taken a position, nor will it, until it thoroughly reviews the application and any comments we receive.”

Easy access to Lake Michigan water was one of Walker’s selling points as he wooed Foxconn last year. Two other Great Lakes states, Michigan and Ohio, were finalists in the company’s sweepstakes for its latest liquid-crystal display (LCD) factory.

Walker, a former Republican presidential candidate who is up for re-election this year, also offered $3 billion in taxpayer subsidies, promised to relax state environmental lawsand pledged to fight federal clean air regulations that would require Foxconn to spend more money on pollution-control equipment.

Of the 7 million gallons of water withdrawn daily for Foxconn, 4.3 million gallons would be treated and returned to the lake and the rest would be lost, mostly from evaporation in the company’s cooling system, according to the application sent to Wisconsin officials.

That amount of lost water falls below a daily limit of 5 million gallons that would trigger a review by other Great Lakes states, including those that lost out on the factory.

Peter Annin, co-director of a Northland College water center and author of “The Great Lakes Water Wars,” said the proposed diversion could be vulnerable to a legal challenge given the lack of agreement among drafters of the compact. There also are political considerations for elected officials in Wisconsin, Michigan and other states in the region who are either seeking higher office or attempting to hold on to the jobs they have now.

“A lot of people are upset with the hubris with which Wisconsin has been dismissing environmental laws in order to grease the wheels for Foxconn,” said Annin, who incorporates the company’s bid for Lake Michigan water in an upcoming edition of his book. “The compact language does appear to provide an opportunity for opponents to trip things up. The fact that Walker is up for re-election this year makes the geopolitical dynamic here even more intriguing.”

Foxconn would be one of the largest users diverting water outside the Great Lakes basin. The largest by far is Chicago, which under a 1967 Supreme Court decree is authorized to withdraw up to 2.1 billion gallons a day from Lake Michigan. The decree also resolved questions about the city’s nearly century-old practice of discharging treated sewage into waterways that drain toward the Mississippi, instead of the Great Lakes.

By contrast, the Great Lakes compact requires Foxconn and Waukesha to treat most of the water used and return it to Lake Michigan.

Cameron Davis, who served as Great Lakes czar for former President Barack Obama, noted the amount of Lake Michigan water that would be diverted for Foxconn is tiny when compared with the volume of the lake.

The bigger question about Foxconn, Davis said, is whether Wisconsin ensures the factory is prevented from releasing toxic pollution into the lake.

Under clean water laws, Foxconn could be required to treat wastewater at the factory to remove hazardous chemicals used during the manufacturing process before it is pumped through Racine’s treatment plant and released back into Lake Michigan.

“It’s understandable that people are focused right now on the compact and the proposed diversion,” Davis said. “But in the long run water quality should be the fight here, rather than water quantity.”

After winning Foxconn, Southeast Wisconsin prepares for influx of jobs as residents fear loss of ‘peace and quiet’