Even the president’s favorite network wasn’t buying his bullshit. 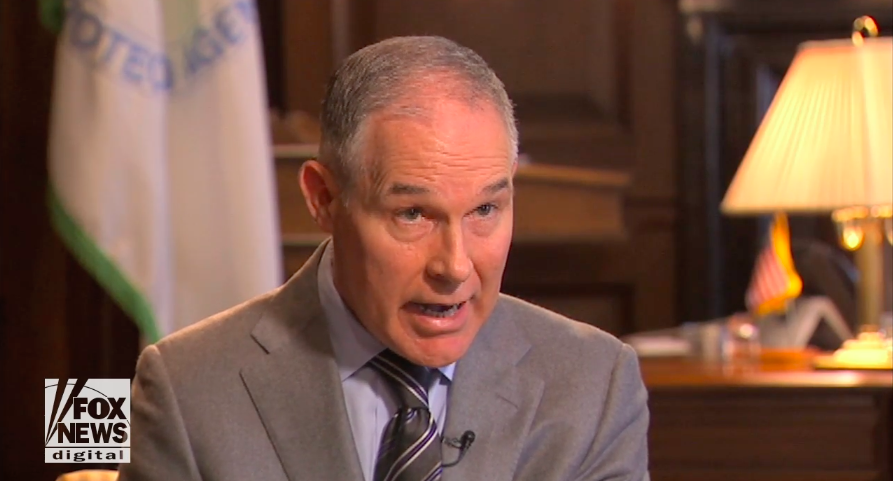 Like others in President Trump’s supposedly swamp-draining cabinet, the EPA administrator was known as a big fan of flying first-class at incredible taxpayer expense. In one instance, he flew top-shelf from Washington, D.C. to New York—a four-hour drive—for a mere $1,600. But this week, we learned Pruitt had designs on being captain of this cabinet’s Blue Angels, as EPA explored leasing a private jet for Pruitt on a monthly basis. It would have cost a mere $100,000 in taxpayer cash each month, according to The Washington Post, and so was abandoned.

That little bit of public service was obscured, however, by two more episodes in Pruitt’s No Good, Very Bad Week and a Half. The Atlantic reported Pruitt went to the White House seeking raises for two longtime aides he brought with him from the Oklahoma attorney general’s office. When the request was denied, Pruitt allegedly used an obscure provision in the Safe Drinking Water Act to grant the raises anyway—to the tune of over 20-grand and 50-grand respectively. Pruitt now denies any knowledge of the raises, and had them peeled back this week after they went public.

And finally, there’s the condo. ABC News broke the news that Pruitt got a sweetheart deal from the wife of a Washington lobbyist to rent a posh apartment, situated on prime D.C. real estate just steps from the Capitol, for just $50 a night. This is far below market rate. And Pruitt paid only when he stayed there. Considering the lobbyist in question represents ExxonMobil, among a host of other firms, this is a bit of obvious swampitude—to the point that even Fox News can’t abide it.

Pruitt sought comfort inside the president’s favorite television network Wednesday evening, but to his credit, correspondent Ed Henry pulled no punches and left Pruitt squirming and stammering in his chair:

Pruitt has done more interviews with Fox than all other networks combined, mostly because they’ll swallow his sell lines about the virtues of rolling back every environmental regulation, ever. This week, that included trashing a rule aimed at curbing vehicle emissions, perhaps to protect Americans’ freedom to inhale more smog. But Henry put Pruitt on the back foot throughout, starting with an exchange over the raises:

PRUITT: I found out about this yesterday, and I corrected the action.

Pruitt throwing his staff under the bus is no surprise—he is, after all, a Trumpist. (Ben Carson threw his own wife under the bus.) But it doesn’t pass the laugh test that two of his closest aides got raises that proved extraordinary in more ways than one and Pruitt didn’t know a thing about it.

But then came the condo:

HENRY: President Trump said he would drain the swamp. Is draining the swamp renting an apartment from the wife of a Washington lobbyist?

PRUITT: I don’t think that that’s remotely fair to ask that question.

That just about says it all. Pruitt not only believes the rules don’t apply to him—he gets legitimately indignant when asked to be accountable to the public.

That didn’t shake Henry, though, and neither did Pruitt’s line about how the lease had been approved by EPA ethics officials. Henry reminded him that Pruitt only sought that approval when the cozy arrangement went public in the last week—months and months after it all went down. Pruitt did not care whether it abided by ethics rules until he was forced to. And then Henry got the administrator to admit he only paid for the apartment on nights he was staying there, the benefits of which the Fox host was forced to spell out to Pruitt:

HENRY: Your house in Oklahoma, you pay a mortgage on that. And when you don’t sleep there, you still pay the mortgage, right?

PRUITT: Not when I’m not using it. I mean, yes. This is a tremendous difference. I wasn’t using the facility, uh, Ed, when I wasn’t there.

Notice Pruitt’s cagey default reaction is just to make something up. No, I don’t pay my mortgage when I’m not there—wait, yes I do! He then explained that he wasn’t using the apartment when he wasn’t there, which is true and also has no bearing on the ethics.

The fact is Pruitt got a sweetheart deal on Washington real estate from the wife of a lobbyist, and at least one of that lobbyist’s clients got approval for a project from the EPA. This is a conflict of interest, an ethics disaster, and perfectly on-brand for the Trump administration.

Pruitt has always transparently operated on behalf of special interests. The New York Times got hold of his schedule book and found it filled with fancy dinners and expensive lunches with representatives from—and lobbyists for—the industries the EPA is tasked with regulating. Pruitt had a top-secret secure phone booth installed in his offices at the agency so that his communications couldn’t be monitored. It was supposed to cost $25,000 in taxpayer cash, but ended up at over $43,000. That was spent presumably so that Pruitt can more effectively Protect the Environment, and definitely not so he can coordinate with those same lobbyists and industry types.

Of all the swamp monsters summoned forth by the Trump Era, Pruitt may well be the most diabolical. He was party to a baker’s dozen of lawsuits against the EPA at the time he was nominated to lead it. As Oklahoma’s attorney general, he received a letter from a prominent energy company complaining about EPA regulations, then stamped his letterhead on it and sent it on to the EPA as official correspondence from this office.

Since becoming the head of the EPA, he has rolled back every regulation in sight, including the Clean Power Plan, which is the United States’ main initiative to comply with the Paris Climate Accords.

That ought to be the most damning dimension of his legacy, along with whatever harm he brings to the quality of air and water in the United States. One wonders how many more Flints there will be by the time Pruitt leaves office. Instead, his obvious swampitude will probably hold the public’s attention.

Pruitt believes he should be free to act however he pleases as a public official, feeding special interests and living in style on the taxpayer dime. That much is clear from the interview. Even worse: He is insulted when you dare ask him why. It’s not just the environment—the very principle of holding public servants accountable is under threat right now. Props to Ed Henry for keeping the tradition alive.