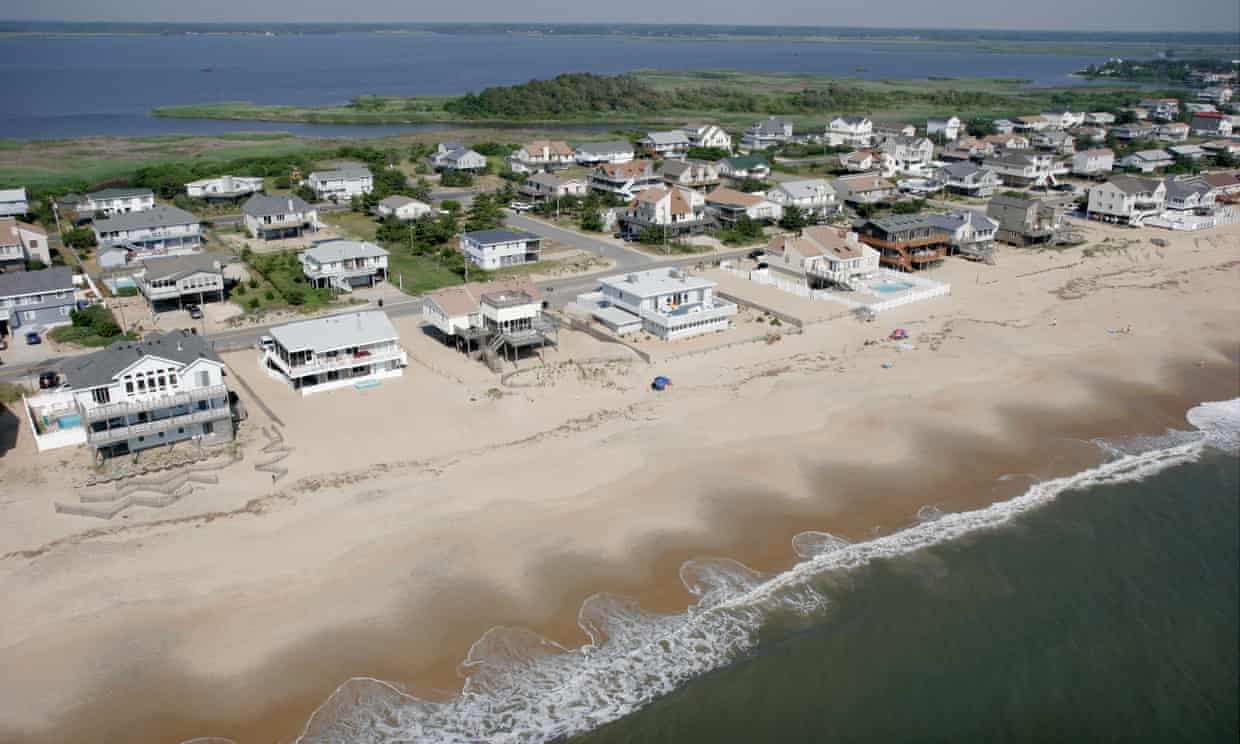 Oceanfront homes in Virginia Beach, Virginia. Houses on the US coastline could risk being flooded every two weeks. Photograph: Alamy

Sea level rise driven by climate change is set to pose an existential crisis to many US coastal communities, with new research finding that as many as 311,000 homes face being flooded every two weeks within the next 30 years.

The swelling oceans are forecast repeatedly to soak coastal residences collectively worth $120 billion by 2045 if greenhouse gas emissions are not severely curtailed, experts warn. This will potentially inflict a huge financial and emotional toll on the half a million Americans who live in the properties at risk of having their basements, backyards, garages or living rooms inundated every other week.

“The impact could well be staggering,” said Kristina Dahl, a senior climate scientist at the Union of Concerned Scientists (UCS). “This level of flooding would be a tipping point where people in these communities would think it’s unsustainable.

“Even homes along the Gulf coast that are elevated would be affected, as they’d have to drive through salt water to get to work or face their kids’ school being cut off. You can imagine people walking away from mortgages, away from their homes.”

The UCS used federal data from a high sea level rise scenario projected by the National Oceanic and Atmospheric Administration, and combined it with property data from the online real estate company Zillow to quantify the level of risk across the lower 48 states.

Under this scenario, where planet-warming emissions are barely constrained and the seas rise by about 6.5ft globally by the end of the century, 311,000 homes along the US coastline would face flooding on average 26 times a year within the next 30 years – a typical lifespan for a new mortgage.

The losses would multiply by the end of the century, with the research warning that as many as 2.4m homes, worth around a trillion dollars, could be put at risk. Low-lying states would be particularly prone, with a million homes in Florida, 250,000 homes in New Jersey and 143,000 homes in New York at risk of chronic flooding by 2100.

“Unfortunately, many coastal communities will face declining property values as risk perceptions catch up with reality.”

This persistent flooding is likely to rattle the housing market by lowering property prices and making mortgages untenable in certain areas. Flood insurance premiums could rise sharply, with people faced with the choice of increasing clean-up costs or retreating to higher ground inland.

“Unfortunately, in the years ahead many coastal communities will face declining property values as risk perceptions catch up with reality,” said Rachel Cleetus, an economist and climate policy director at UCS. “In contrast with previous housing market crashes, values of properties chronically inundated due to sea level rise are unlikely to recover and will only continue to go further underwater, literally and figuratively.”

The report does not factor in future technological advances that could ameliorate the impact of rising seas, although the US would be starting from a relatively low base compared with some countries given that it does not have a national sea level rise plan. And the current Trump administration has moved to erase the looming issue from consideration for federally funded infrastructure. 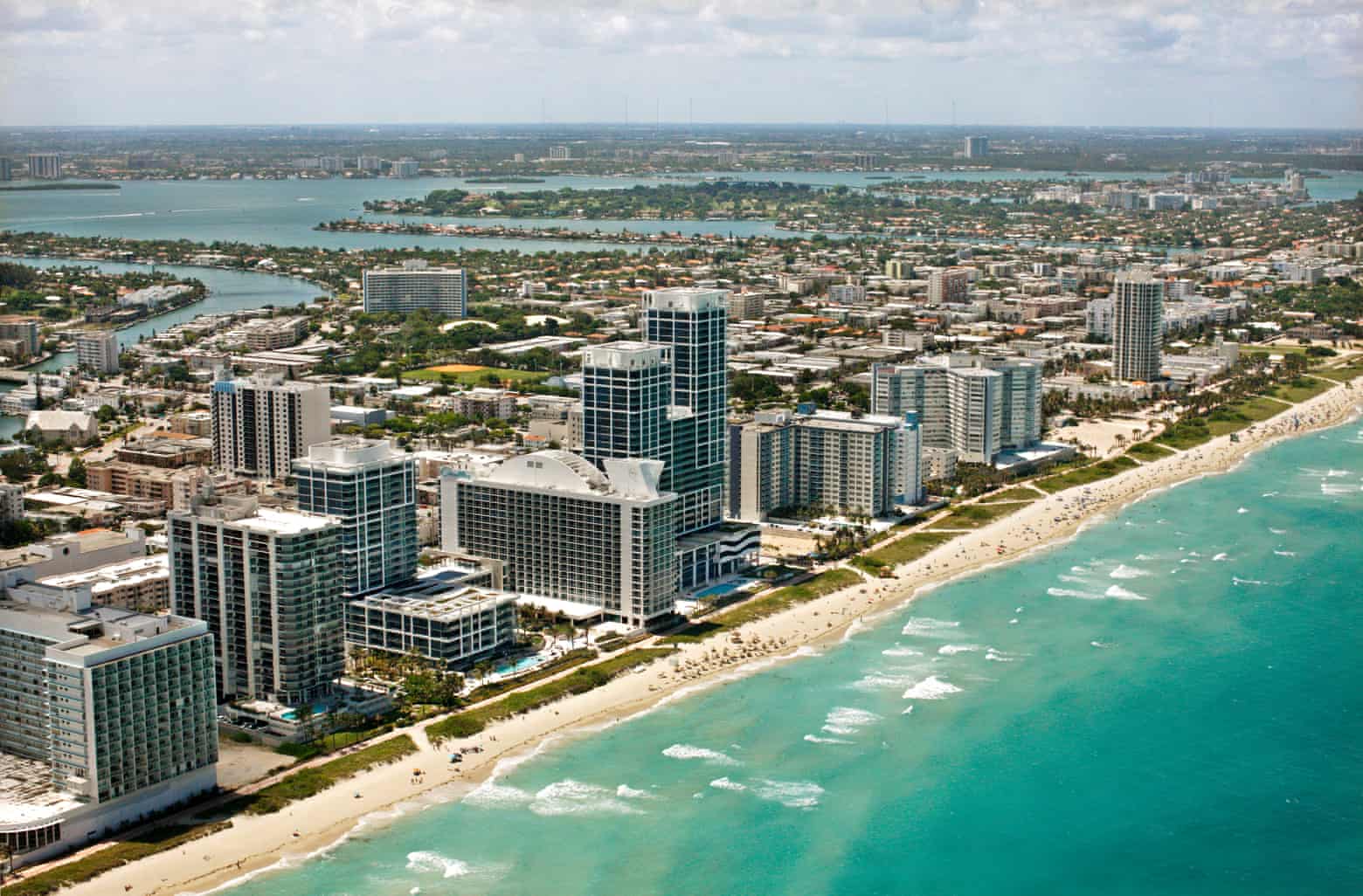 Miami mayor: ‘People on the waterfront won’t be able to stay unless they are very wealthy.’ Photograph: Hoberman Collection/UIG via Getty Images

The oceans are rising by about 3mm a year due to the thermal expansion of seawater that’s warming because of the burning of fossil fuels by humans. The melting of massive glaciers in Greenland and Antarctica is also pushing up the seas – Nasa announced last week that the amount of ice lost annually from Antarctica has tripled since 2012 to an enormous 241bn tons a year.

This slowly unfolding scenario is set to pose wrenching choices for many in the US. Previous research has suggested that about 13 million Americans may have to move due to sea level rise by the end of the century, with landlocked states such as Arizona and Wyoming set for a population surge.

“My flood insurance bill just went up by $100 this year, it went up $100 the year before,” said Philip Stoddard, the mayor of South Miami. “People on the waterfront won’t be able to stay unless they are very wealthy. This isn’t a risk, it’s inevitable.

“Miami is a beautiful and interesting place to live – I’m looking at a lizard on my windowsill right now. But people will face a cost to live here that will creep up and up. At some point they will have to make a rational economic decision and they may relocate. Some people will make the trade-off to live here. Some won’t.”

… we have a small favor to ask. More people are reading the Guardian than ever but advertising revenues across the media are falling fast. And unlike many news organizations, we haven’t put up a paywall. By making our journalism publicly available, we’re able to hold governments, companies and institutions to account, and offer our diverse readership a platform for debate and commentary – encouraging us all to challenge our opinions on what’s happening in our world.

The Guardian’s independent, investigative journalism takes a lot of time, money and hard work to produce. But we do it because we believe our perspective matters – because it might well be your perspective, too.

I appreciate there not being a paywall: it is more democratic for the media to be available for all and not a commodity to be purchased by a few. I’m happy to make a contribution so others with less means still have access to information.Thomasine, Sweden

If everyone who reads our reporting, who likes it, helps to support it, our future would be much more secure. For as little as $1, you can support the Guardian – and it only takes a minute.