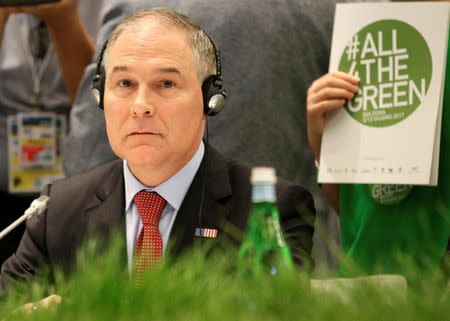 (Reuters) – The U.S. government spent over $30,000 on personal security for Environmental Protection Agency chief Scott Pruitt during his trip last year to Italy, according to documents obtained by a watchdog group that said the spending was irresponsible at a time of budget cuts.

According to the document, obtained by the Environmental Integrity Project through a Freedom of Information Act request and shown to Reuters, Pruitt’s personal security detail racked up $30,553.88 in travel costs from June 5 through June 12, 2017, when Pruitt was in Italy for meetings at the Vatican and to attend a summit of foreign energy ministers.

Previous documents released by EIP showed the cost of Pruitt’s trip to Italy at $43,000, not including the security detail. The new documents, which include airfare and expenses for Pruitt, his career and political staff, and his security detail, put the cost over $80,000, EIP calculated.

“Mr. Pruitt’s trip to Rome last summer cost the taxpayers over $84,000,” said Eric Schaeffer, EIP’s director. “That’s a lot of money for Mr. Pruitt to tour the Vatican, pose for photos, and tell his European counterparts that global warming doesn’t matter,” he said.

Spending by top officials in the Trump administration has come under more scrutiny by critics at a time when federal agencies have been making sharp budget cuts. Lawmakers have also criticized Pruitt for frequently flying first-class, and for spending tens of thousands of dollars on a secure sound-proof telephone booth for his office.

EPA spokesman Jahan Wilcox said the security detail “followed the same procedures for the G7 environmental meeting in Italy that were used during EPA Administrators Stephen Johnson, Lisa Jackson, and Gina McCarthy’s trips to Italy. EPA’s security procedures have not deviated over the past 14 years.”

It was unclear from looking at the document how many members were in the security detail, and no breakdown of the spending was provided.

EIP has been critical of Pruitt’s statements questioning the causes of global climate change and his efforts to roll back environmental protections.

EPA has said Pruitt has flown first-class as a security measure, and that the administrator does not make decisions relating to his security detail.