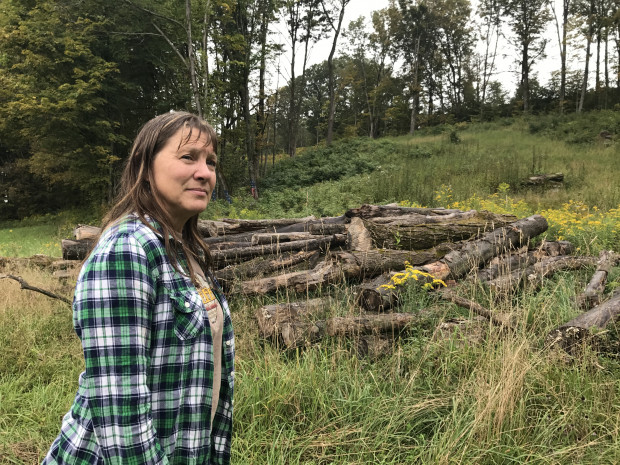 Hundreds of Cathy Holleran’s maple trees were cut down, through the use of eminent domain, for an interstate natural gas pipeline that’s now stalled.

In March 2016, workers for one of the nation’s largest natural gas pipeline companies cut down a large swath of maple trees in Susquehanna County–a rural patch of northeastern Pennsylvania. A video shot by an activist shows the trees crashing down as chainsaws buzz.

Cathy Holleran was powerless to stop it. At the time, she was tapping the trees for her family’s maple syrup business, but the pipeline company condemned her land using the power of eminent domain.

Driving around a year-and-a half later, she’s still in disbelief. A court order had prevented her from interfering, and law enforcement officers came to protect the pipeline workers.

“We had to stay completely away. They brought armed U.S. Marshals with assault rifles and Pennsylvania State Police, and had guys walking all over property in bullet proof vests,” Holleran recalls. “I mean, really! We’re making syrup. What are we going to do? Are we going to go attack these guys?”

“This used to all be woods– as thick as that,” she says, gesturing to a cluster of remaining trees.

By her count, she lost more than 550 maples, “I went through with my camera and took pictures from every angle and counted them by hand to make sure I was accurate.”

She says her family’s maple syrup business has been cut in half. But the real shame of it all, Holleran adds, is this may all have been for nothing.

The Constitution Pipeline was supposed to emanate from northeastern Pennsylvania, and run 121 miles through New York State. Federal regulators gave their blessing to the project. So did Pennsylvania regulators. But New York State (whose border is about 20 miles from Holleran’s land) refused to grant a necessary water permit.

The pipeline company, Williams, sued, but a federal court recently sided with New York. Holleran says she’d warned the company of this possibility.

Williams spokesman, Chris Stockton, says at the time the company was working with New York’s Department of Environmental Conservation, and the permit was advancing.

“We were addressing their concerns as they came up,” he says. “We had no reason to think we would not receive that permit. We were playing by the rules and doing everything we needed to do.”

‘The rules of the game have changed’

“What happened with the Constitution was a surprise,” says Fred Lowther, a partner with the law firm Blank Rome, who’s represented major oil and gas pipeline companies.

It reminds him of another ruling, about a decade ago, when the industry ran into a similar problem: a state killed a federally-approved pipeline. The Islander East project was supposed to run from Connecticut, under Long Island Sound. But Connecticut wouldn’t give it a water quality certificate, claiming it would damage nearly 600 acres of clam beds. And when the pipeline companies sued, a federal court sided with the state.

“It caused quite a stir in the industry,” Lowther says of the ruling. “Because the intention was not to give states the veto power over a federally-approved project, but to give them a say in how the project was shaped.”

History appears to be repeating itself with the Constitution Pipeline. Lowther says pipeline companies will likely be more cautious.

“I think going forward, people will be very careful before they authorize either the taking of land or the clearing of right of way,” he says.

It has long been assumed by the pipeline industry that once their projects get approval from the Federal Energy Regulatory Commission (FERC) the state permits fall into place.

“Historically, that has not been a problem,” says Mark Robinson, a gas industry consultant who used to work at FERC. ”We’re kinda in a new arena now. The rules of the game have changed a little bit.”

“I imagine you’ll see significant pushback from the pipeline industry,” he says.

Last week FERC overruled New York environmental regulators in their denial of a water permit to another pipeline, saying the state had taken too long with its review and thus “waived” its authority.

Landowners often find themselves with few options. Angela McGowan is an attorney for the Harrisburg for the firm, Pillar Aught. She’s represented property owners dealing with other new pipelines in Pennsylvania, and says the industry generally has the upper hand—they just have to pay the people whose land their taking.

Eminent domain occurs in a sort of vacuum, she explains. The law doesn’t consider whether a pipeline company has all its permits in hand–  the i’s dotted and the t’s crossed.

“The eminent domain code basically just says you’ve got to prove you have the power,” says McGowan. “Once you do that, it’s just about what the ‘just compensation’ is.”

But Cathy Holleran is waiting for answers. She and the company are still in court and haven’t agreed on how much she should be paid.

“I can’t even tell you the amount of stress, personally, this has put us through,” she says.

The conflicting decisions from the state of New York and the federal government have left her with heaps of rotting maple trees strewn across her property.