Dedicated tribes are working to protect and revive Manoomin, weaving it back into Native diets and the fabric of the community in the Upper Midwest. 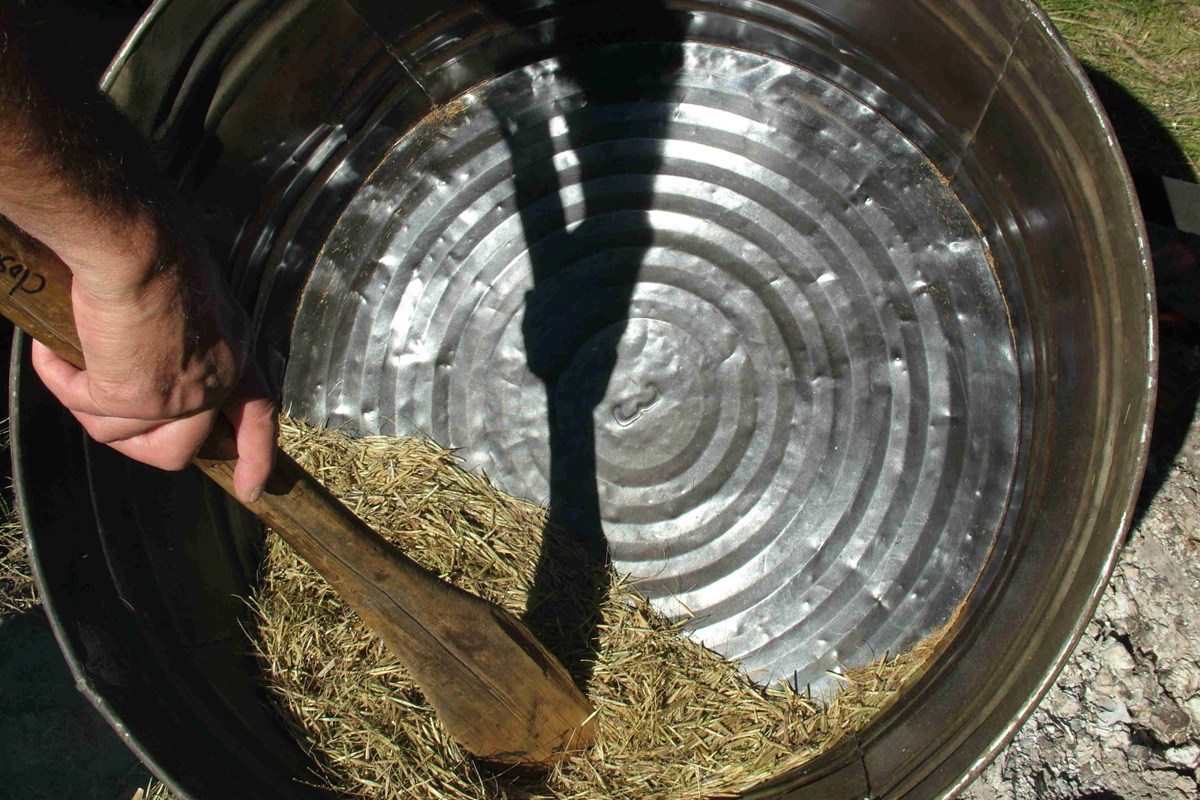 When Renee Dillard tastes freshly cooked wild rice harvested by her hands, she feels a spiritual connection to the “sacred food” of her people. That spell is broken when she tastes the wild rice that most of us buy and eat.

Native wild rice, often referred to as Manoomin, which means “the good berry” in Ojibwe, isn’t the perfectly uniform dark brown long grains you find in supermarkets. Although it has the same name, much of that rice is commercially grown and has been genetically engineered. Just because the label says it’s wild, that’s not always true. Native wild rice, with flecks of brown and yellow, has a grass-like quality and a subtle flavor.

“As soon as I put that mass-cultivated rice on my tongue I can taste the emptiness,” Dillard says. “This food is soulless. It doesn’t fill me with life or joy, but reminds me of caged chickens who never see the light of day, nor touch the ground . They don’t know who they are. This rice is empty.” 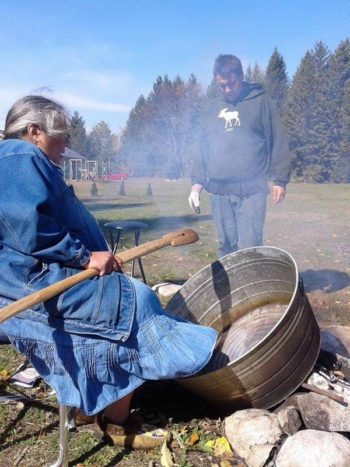 Dillard is a traditional ricer and basket weaver from the Little Traverse Bay Bands of Odawa Indians, based in the northern part of the state. Through spoken word she has learnt about the ancestry of wild rice from elders in her community.

Dillard is a survivor of the U.S. government boarding school experiment to “Americanize” her and her community. “I’ve been kidnapped, abused and robbed of language, culture and everything that makes me who I am,” she says.

Now in her 50’s, she teaches the next generation the traditions of weaving with wild rice stalks and stewardship of the land and lakes. During last winter’s Arctic freeze that covered most of the Midwest, Dillard was out in the woods with her long grey hair fighting the wind, her traditional moccasin shoes knee-deep in the snow, observing the changes of the seasons. With the arrival of spring, the 57-year-old waits for the first shoots of wild rice.

Dillard remembers when she was very young she’d walk to the edge of reservation and there would be wild rice growing. But with urban development, pollution, and the threat of GMO seed contamination, native wild rice is struggling to survive. Dillard is part of a movement to restore wild rice in Michigan.

For the past 10 years several tribes, including the Little Traverse Bay Bands of Odawa Indians, and the Lac Vieux Desert Band of Lake Superior Chippewa Indians have come together to form Michigan’s wild rice restoration project where they can track and restore native wild rice in the state’s rivers and lakes.

Shiloh Maples, 33, lives and works in the heart of downtown Detroit. She brings her passion for Native foods to city streets, food banks, and community gardens. Working for American Indian Health Family Services she helps provide food relief to Native Americans and other struggling communities living below the poverty line. As the program manager for food sovereignty and wellness, her mission is to develop the concept of food sovereignty.

Marginalized communities are empowered to have a stake in the food system, to control what they eat, and how they eat it. About seven years ago Shiloh noticed that a lot of families relied on local corner stores for their food or food stamps. With limited finances and no transportation, struggling families had to make do with whatever food they had access to. Often it was canned foods and junk food.

Under the program Shiloh manages they have a choice. Native Americans can get traditional, culturally appropriate foods including wild rice soups, berries, fish and turkey.

Shiloh’s work on food sovereignty within the indigenous community has led her to develop community gardens in Romanowski Park that grow traditional foods, and cooking classes to rediscover traditional Native American meals. “As the community garden grew, the community realized that they cared about how their food was grown,” she said. “Was it done in an ethical way? Did it respect mother earth? They wanted to make sure that culture and tradition were part of how their food is produced. So that means incorporating song and ceremony and prayers to the planting and harvesting.”

With the help of Shiloh’s project poverty-stricken families feel they can make life-changes. “It’s exciting to watch. They’re making connections of where their food comes from and their relationship to that food. That changes people, ” she said.

Food offers an emotional connection to urban tribes-people in cities including Detroit, Seattle and Chicago who are looking to strengthen bonds to family and cultural roots.

Shelley Means, 55, is one of the many city dwelling tribes people who see traditional meals and sharing stories over food as keys to unlock history and family traditions. Shelley’s mother is from the White Earth Nation and her father was Lakota. She grew up in the city knowing very little of her family history.

As a young girl she recalls that her grandfather would send packets of wild rice and occasionally they would visit him for gatherings in Bemidji, Minnesota. She realized that some of her most powerful childhood memories are gatherings where hundreds of tribe members gathered for meals with bowls of wild rice. “I can’t remember much about the reason for the gathering, but I do remember the smell and taste of wild rice,” she recalls. 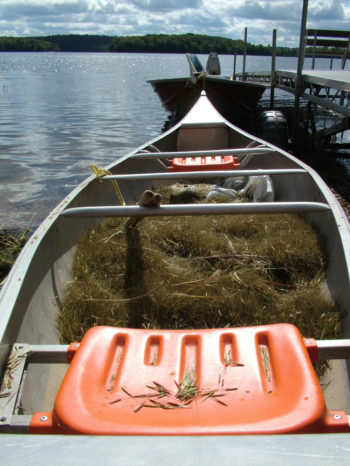 A boat-sized haul of wild rice. Photo by Jo Erickson.

These memories drove Shelley to seek out family members who could tell her more about her family and traditions. One of her aunts told her what she knew so that Shelly could in turn pass on family history to her son.

Whenever she thinks about wild rice, she thinks about her family. She smiles as she recalls how her uncle would grind the grain to make bread and her mother prepared wild rice, “She’d heat it up in the microwave, then put a bit of milk and black pepper, that’s her favorite thing.”

According to Barb Barton, Aquatic Resource Specialist at the Michigan Department of Transportation, restoring native wild rice across the state will take several years to accomplish.

One of the biggest challenges is the decimation of wild rice found in the north of the state. “There were 212 historical wild rice sites scattered across the state dating back to the 1800’s, but only 14 are known to still exist,” says Barton, author of “Manoomin: The Story of Wild Rice in Michigan.”

Zizania palustris, a native wild rice plant found in northern Michigan, is on the threatened species list. In the last two years Michigan’s Department of Natural Resources has worked with tribes to restore some of the old rice sites.

In Michigan wild rice harvesting is unregulated. That’s in contrast to Minnesota and Wisconsin, where state laws give tribes sovereignty over wild rice. Tribal members carry permits to harvest rice and non-tribal ricers buy licenses. Despite these challenges, Michigan’s wild rice restoration project has replanted and manages 136 native wild rice beds. At the same time more and more urban tribes people are rediscovering the value of returning to a traditional diet of wild rice.

There is still a long way to go before northern wild rice is taken off the threatened species list. If Michigan were to lose its native wild rice, “it would be devastating,” says Shelly Means. “The stories will still be here, but the rice will not.”