The intervention by Scott Pruitt’s aides came after one White House official warned the findings would cause a ‘public relations nightmare.’ 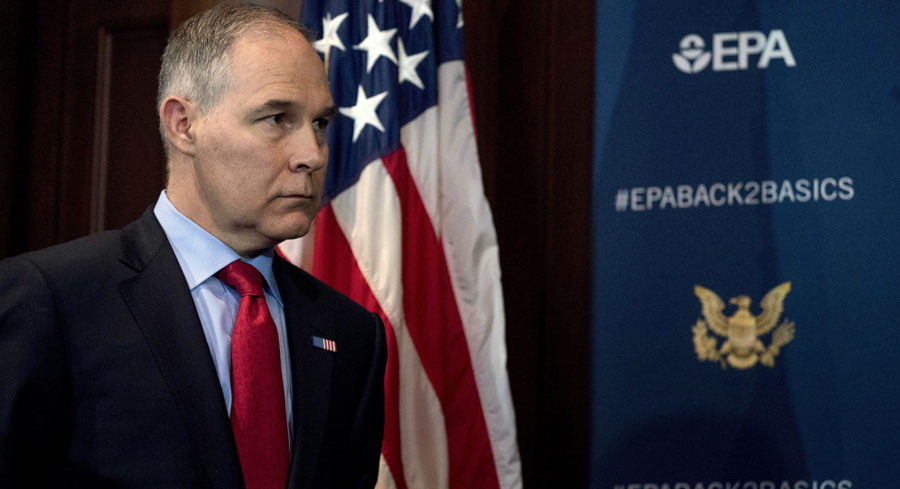 Scott Pruitt’s EPA and the White House sought to block publication of a federal health study on a nationwide water-contamination crisis, after one Trump administration aide warned it would cause a “public relations nightmare,” newly disclosed emails reveal.

The intervention early this year — not previously disclosed — came as HHS’ Agency for Toxic Substances and Disease Registry was preparing to publish its assessment of a class of toxic chemicals that has contaminated water supplies near military bases, chemical plants and other sites from New York to Michigan to West Virginia.

The study would show that the chemicals endanger human health at a far lower level than EPA has previously called safe, according to the emails.

“The public, media, and Congressional reaction to these numbers is going to be huge,” one unidentified White House aide said in an email forwarded on Jan. 30 by James Herz, a political appointee who oversees environmental issues at the OMB. The email added: “The impact to EPA and [the Defense Department] is going to be extremely painful. We (DoD and EPA) cannot seem to get ATSDR to realize the potential public relations nightmare this is going to be.”

More than three months later, the draft study remains unpublished, and the HHS unit says it has no scheduled date to release it for public comment. Critics say the delay shows the Trump administration is placing politics ahead of an urgent public health concern — something they had feared would happen after agency leaders like Pruitt started placing industry advocates in charge of issues like chemical safety.

“Families who have been exposed to emerging contaminants in their drinking water have a right to know about any health impacts, and keeping such information from the public threatens the safety, health, and vitality of communities across our country,” Hassan said, citing POLITICO’s reporting of the issue.Details of the internal discussions emerged from EPA emails released to the Union of Concerned Scientists under the Freedom of Information Act.

Sen. Jeanne Shaheen, a fellow New Hampshire Democrat, called the delay “an egregious example of politics interfering with the public’s right to know. … [I]t’s unconscionable that even the existence of this study has been withheld until now.”

The emails portray a “brazenly political” response to the contamination crisis, said Judith Enck, a former EPA official who dealt with the same pollutants during the Obama administration — saying it goes far beyond a normal debate among scientists.

“Scientists always debate each other, but under the law, ATSDR is the agency that’s supposed to make health recommendations,” she said.

The White House referred questions about the issue to HHS, which confirmed that the study has no scheduled release date.

Pruitt‘s chief of staff, Ryan Jackson, defended EPA’s actions, telling POLITICO the agency was helping “ensure that the federal government is responding in a uniform way to our local, state, and Congressional constituents and partners.”

Still, Pruitt has faced steady criticism for his handling of science at the agency, even before the recent spate of ethics investigations into his upscale travels and dealings with lobbyists. In his year leading EPA, he has overhauled several scientific advisory panels to include more industry representatives and recently ordered limits on the kinds of scientific studies the agency will consider on the health effects of pollution.

On the other hand, Pruitt has also called water pollution one of his signature priorities.

The chemicals at issue in the HHS study have long been used in products like Teflon and firefighting foam, and are contaminating water systems around the country. Known as PFOA and PFOS, they have been linked with thyroid defects, problems in pregnancy and certain cancers, even at low levels of exposure.

The problem has already proven to be enormously costly for chemicals manufacturers. The 3M Co., which used them to make Scotchguard, paid more than $1.5 billion to settle lawsuits related to water contamination and personal injury claims.

But some of the biggest liabilities reside with the Defense Department, which used foam containing the chemicals in exercises at bases across the country. In a March report to Congress, the Defense Department listed 126 facilities where tests of nearby water supplies showed the substances exceeded the current safety guidelines.

A government study concluding that the chemicals are more dangerous than previously thought could dramatically increase the cost of cleanups at sites like military bases and chemical manufacturing plants, and force neighboring communities to pour money into treating their drinking water supplies.

The discussions about how to address the HHS study involved Pruitt’s chief of staff and other top aides, including a chemical industry official who now oversees EPA’s chemical safety office.

Herz, the OMB staffer, forwarded the email warning about the study’s “extremely painful” consequences to EPA’s top financial officer on Jan. 30. Later that day, Nancy Beck, deputy assistant administrator for EPA’s Office of Chemical Safety and Pollution Prevention, suggested elevating the study to OMB’s Office of Information and Regulatory Affairs to coordinate an interagency review. Beck, who worked as a toxicologist in that office for 10 years, suggested it would be a “good neutral arbiter” of the dispute.

“OMB/OIRA played this role quite a bit under the Bush Administration, but under Obama they just let each agency do their own thing…,” Beck wrote in one email that was released to UCS.

Beck, who started at OMB in 2002, worked on a similar issue involving perchlorate, an ingredient in rocket fuel — linked with thyroid problems and other ailments — that has leached from defense facilities and manufacturing sites into the drinking water of at least 20 million Americans. Beck stayed on at OMB into the Obama administration, leaving the office in January 2012 and going to work for the American Chemistry Council, where she was senior director for regulatory science policy until joining EPA last year.

Yogin Kothari, a lobbyist with the Union of Concerned Scientists, called Beck’s January email “extremely troubling because it appears as though the White House is trying to interfere in a science-based risk assessment.”

Environmentalists say such interference was routine during the Bush administration.

“It’s why the Obama administration issued a call for scientific integrity policies across the federal government,” Kothari said in an email to POLITICO. “Dr. Beck should know firsthand that the Bush administration sidelined science at every turn, given that she spent time at OMB during that time.”

Soon after the Trump White House raised concerns about the impending study, EPA chief of staff Ryan Jackson reached out to his HHS counterpart, as well as senior officials in charge of the agency overseeing the assessment to discuss coordinating work among HHS, EPA and the Pentagon. Jackson confirmed the outreach last week, saying it is important for the government to speak with a single voice on such a serious issue.

“EPA is eager to participate in and, contribute to a coordinated approach so each federal stakeholder is fully informed on what the other stakeholders’ concerns, roles, and expertise can contribute and to ensure that the federal government is responding in a uniform way to our local, state, and Congressional constituents and partners,” Jackson told POLITICO via email.

Pruitt has made addressing per- and polyfluoroalkyl substances, or PFAS, a priority for EPA. The unpublished HHS study focused on two specific chemicals from this class, PFOA and PFOS.

States have been pleading with EPA for help, and experts say that contamination is so widespread, the chemicals are found in nearly every water supply that gets tested.

In December, the Trump administration’s nominee to head the agency’s chemical safety office, industry consultant Michael Dourson, withdrew his nomination after North Carolina’s Republican senators said they would not support him, in large part because of their state’s struggles with PFAS contamination. Dourson’s previous research on the subject has been criticized as too favorable to the chemical industry.

Shortly after Dourson’s nomination was dropped, Pruitt announced a “leadership summit” with states to discuss the issue scheduled for next week.

In 2016, the agency published a voluntary health advisory for PFOA and PFOS, warning that exposure to the chemicals at levels above 70 parts per trillion, total, could be dangerous. One part per trillion is roughly the equivalent of a single grain of sand in an Olympic-sized swimming pool.

The updated HHS assessment was poised to find that exposure to the chemicals at less than one-sixth of that level could be dangerous for sensitive populations like infants and breastfeeding mothers, according to the emails.

Dave Andrews, a senior scientist with the Environmental Working Group, said those conclusions line up with recent studies on the health effects of PFAS.

“They are looking at very subtle effects like increased risk of obesity for children exposed in womb, lowered immune response, and childhood vaccines becoming not as effective,” Andrews said.

The HHS document at issue is called a toxicological profile, which describes the dangers of a chemical based on a review of previous scientific studies. It would carry no regulatory weight itself, but could factor into cleanup requirements at Superfund sites.

EPA scientists, including career staffers, were already talking with the HHS researchers about the differences in their two approaches to evaluating the chemicals when officials at the White House raised alarm in late January, the emails show. Those differences, according to the correspondence, stemmed from the agencies’ use of different scientific studies as a basis, and from taking different approaches to accounting for the harm that the chemicals can do to the immune system — an area of research that has burgeoned in the two years since EPA issued its health advisory.

Enck, the former EPA official, said she sees one troubling gap in the emails: They make “no mention of the people who are exposed to PFOA or PFOS, there’s no health concern expressed here.”