When Our Allies Are Accused of Harassment 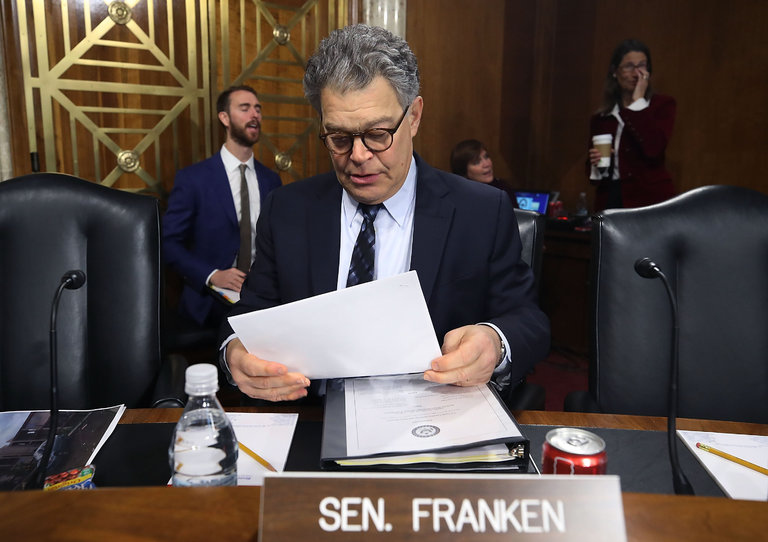 Last Thursday, after a photograph emerged of Senator Al Franken either groping or pretending to grope a sleeping woman, Leeann Tweeden, with whom he’d been traveling on a 2006 U.S.O. tour, I wrote that he should resign. Almost as soon as it was published I started having second thoughts. I spent all weekend feeling guilty that I’d called for the sacrifice of an otherwise decent man to make a political point.

Then I saw the news that a woman named Lindsay Menz accused Franken of grabbing her butt while they posed for a photo at the Minnesota State Fair in 2010, when he was a senator, and I read Franken’s lame non-denial: “I feel badly that Ms. Menz came away from our interaction feeling disrespected.”

Yet I am still not sure I made the right call. My thinking last week, when the first accusation emerged, was: cauterize the wound. It doesn’t matter that Franken’s transgression wasn’t on the same level as the abuses that the Alabama Senate candidate Roy Moore or Donald Trump have been accused of. That photo — the unconscious woman, the leering grin — is a weight Democrats shouldn’t have to carry, given that they’ve lately been insisting that it’s disqualifying for a candidate to grab a woman sexually against her will. It seemed cruel to expect Democratic women to make Jesuitical arguments that the shadows under Franken’s hands meant he wasn’t really touching Tweeden’s chest. Especially since, with a Democratic governor in Minnesota, the party would maintain control of Franken’s seat.

But even as I made the case for resignation, I was relieved that it seemed as if Franken might stick around, because I adore him as a public figure. It’s easy to condemn morally worthless men like Trump; it’s much harder to figure out what should happen to men who make valuable political and cultural contributions, and whose alleged misdeeds fall far short of criminal. Learning about all the seemingly good guys who do shameful things is what makes this moment, with its frenzied pace of revelations, so painful and confounding.

Personally, I’m torn by competing impulses. I want to see sexual harassment finally taken seriously but fear participating in a sex panic. My instinct is often to defend men I like, but I don’t want to be an enabler or a sucker. I try not to be a hypocrite, while being aware that the right plays on the media’s desire to seem fair-minded, which is part of what led to wildly excessive coverage of Hillary Clinton’s emails during the presidential campaign, among other distortions.

It’s not a coincidence that the post-Harvey Weinstein purge of sexual harassers has been largely confined to liberal-leaning fields like Hollywood, media and the Democratic Party. This isn’t because progressive institutions are more sexist than others — I’m confident there’s at least as much sexual abuse in finance as in publishing. Rather, organizations with liberal values have suddenly become extremely responsive to claims of sexism. Feminists, enraged and traumatized by Donald Trump’s election, know they can’t expect accountability from Republicans, but they’ve forced it from people who claim to share their ideals. As a result, it sometimes feels as if liberal institutions are devouring themselves over sex while conservatives, unburdened by the pretense of caring about gender equality, blithely continue their misrule.

Adding to the confusion is the way so many different behaviors are being lumped together. Weinstein’s sadistic serial predation isn’t comparable to Louis C.K.’s exhibitionism. The groping Franken has been accused of isn’t in the same moral universe as Moore’s alleged sexual abuse of minors. It seems perverse that Franken could be on his way out of the Senate while Moore might be on his way in.

It’s possible that feminists, in trying to hold Democrats to standards that they wish were universal, risk unilateral disarmament. Kate Harding made this case in The Washington Post last Friday, arguing against Franken’s resignation. If Democrats “set this precedent in the interest of demonstrating our party’s solidarity with harassed and abused women, we’re only going to drain the swamp of people who, however flawed, still regularly vote to protect women’s rights and freedoms,” she wrote. And when the next Democratic member of Congress goes down, there might not be a Democratic governor to choose his replacement.

I’m partly persuaded by this line of reasoning, though conservatives mock it as the “one free grope” rule. It’s a strange political fiction that anyone can really separate partisanship from principle. In general, the character of the party that controls the government has a much greater impact on people’s lives than the character of individual representatives. Those who care about women’s rights shouldn’t be expected to prove it by being willing to hand power to people devoted to taking those rights away.

Yet just as there’s a cost for cutting good but imperfect men loose, there’s a cost to defending them from consequences we’d demand if the politics were reversed. It forces feminists to treat our own standards as unrealistic, to undermine our own arguments. Ultimately, however these dilemmas play out, we lose: either the moral high ground or men whom we need, admire and maybe even love.