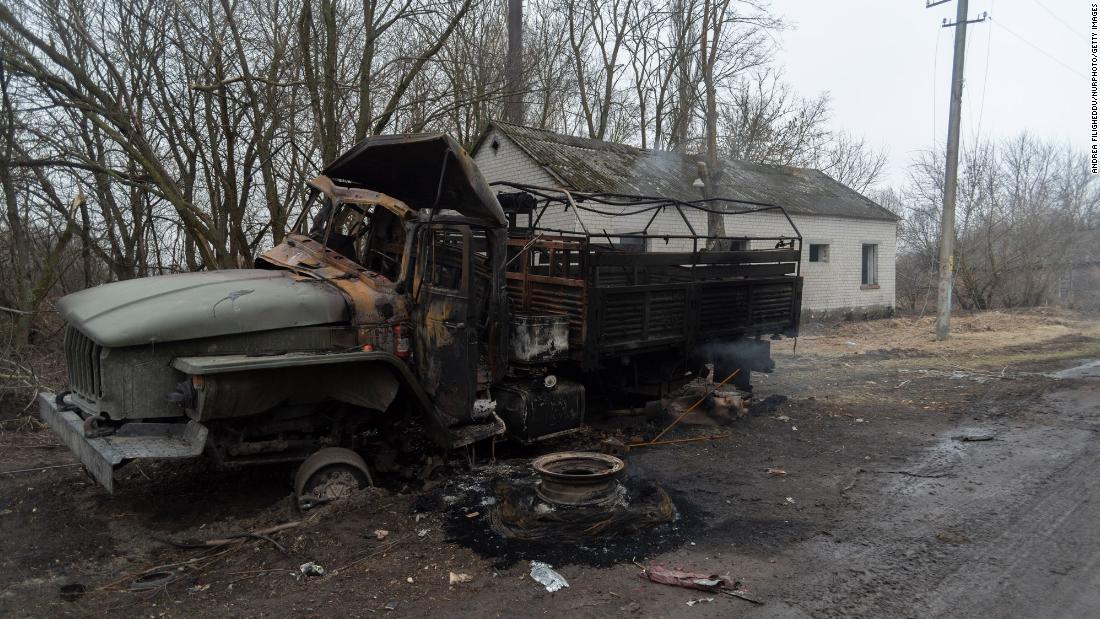 Moscow’s supply lines have been hit hard by Ukrainian resistance.

(CNN) Think about modern warfare and it’s likely images of soldiers, tanks and missiles will spring to mind. But arguably more important than any of these is something on which they all rely: the humble truck. Armies need trucks to transport their soldiers to the front lines, to supply those tanks with shells and to deliver those missiles. In short, any army that neglects its trucks does so at its peril.

Yet that appears to be exactly the problem Russia’s military is facing during its unprovoked invasion of Ukraine, according to experts analyzing battlefield images as its forces withdraw from areas near Kyiv to focus on the Donbas.

Photographs of damaged Russian trucks, they say, show tell-tale signs of Moscow’s logistical struggles and suggest its efforts are being undermined by its reliance on conscripts, widespread corruption and use of civilian vehicles — not to mention the huge distances involved in resupplying its forces, or Ukraine’s own highly-motivated, tactically-adept resistance.

“Everything that an army needs to do its thing comes from a truck,” says Trent Telenko, a former quality control auditor for the United States’ Defense Contract Management Agency, who is among those parsing the images for clues as to how the war is going.

“The weapon isn’t the tank, it’s the shell the tank fires. That shell travels by a truck,” Telenko points out. Food, fuel, medical supplies and even the soldiers themselves — the presence of all of these rest on logistical supply lines heavily reliant on trucks, he says. And he has reason to believe there’s a problem with those supply lines. 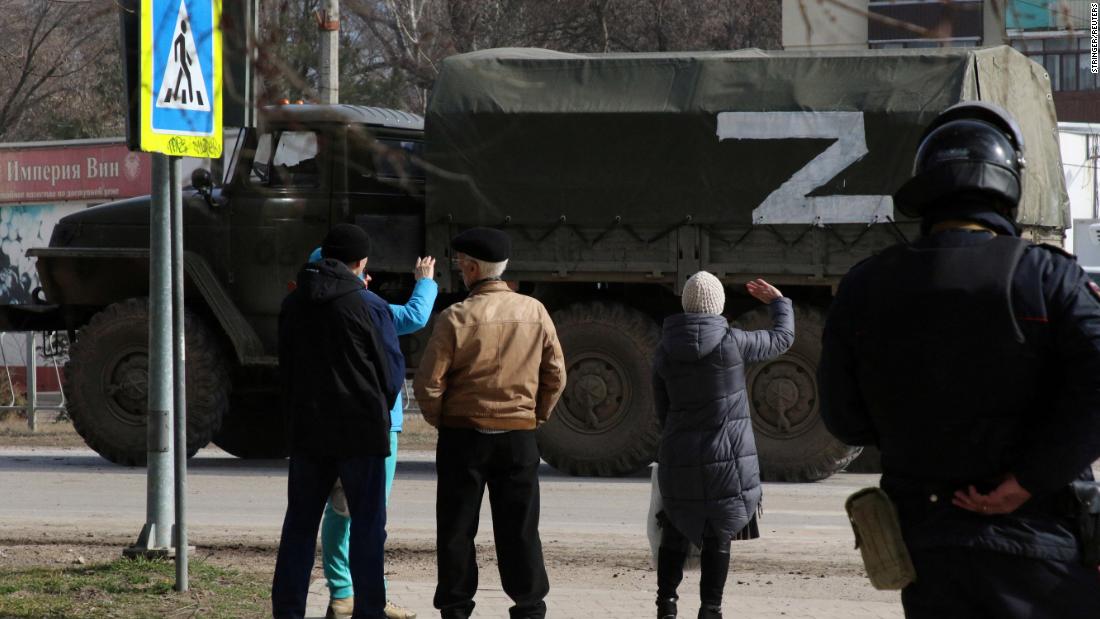 A Russian military truck with the letter ‘Z’, a symbol of its invasion of Ukraine, in the town of Armyansk, Crimea, on February 24.

Canary in the coal mine

Telenko describes one recent photo of tire damage on a multimillion-dollar mobile missile truck, a Pantsir S1, as the canary in the coal mine for Russia’s logistical efforts.

As such an expensive piece of equipment, he would have expected its maintenance to be first-rate. Yet its tires were crumbling just a few weeks into the war — what Telenko refers to as “a failure mode.”

If trucks are not moved frequently the rubber in their tires becomes brittle and the tire walls vulnerable to cracks and tears. Telenko says the problem is common when tires are run with low inflation to cope with the sort of muddy conditions that Russian forces are facing in the Ukrainian spring.

For Telenko, who for more than a decade specialized in maintenance problems in the US military’s truck fleet, the condition of the Pantsir S1 is a revealing mistake.

“If you’re not doing (preventive maintenance) for something so important, then it’s very clear the entire truck fleet was treated similarly,” he says. 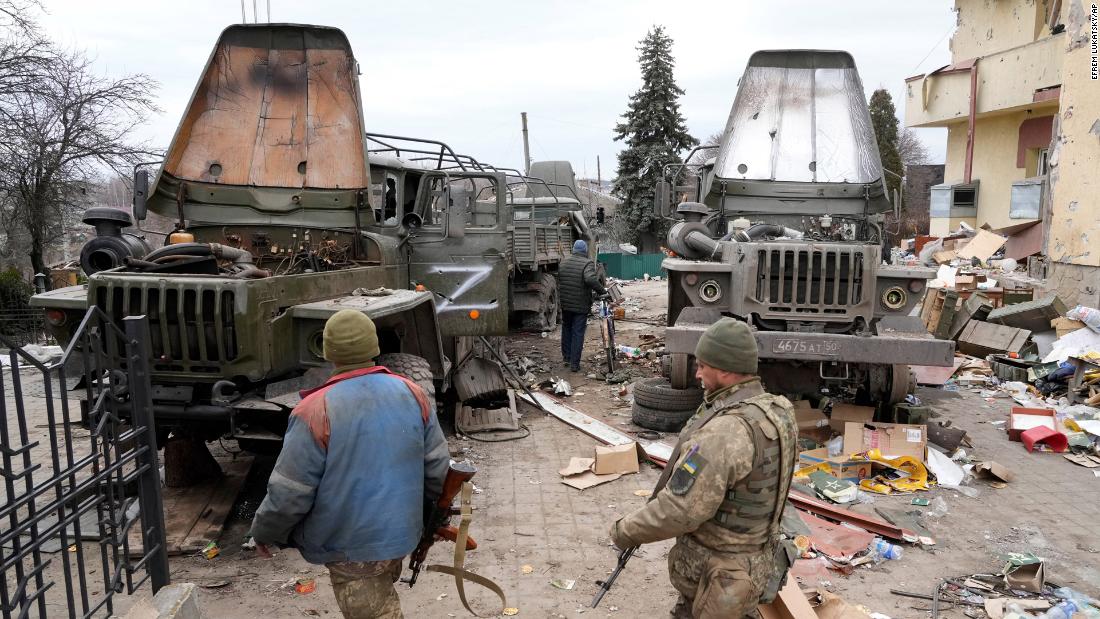 Ukrainian soldiers in front of damaged Russian military trucks in the town of Trostsyanets, some 400 kilometers (250 miles) east of Kyiv on March 28.

Telenko’s theory has echoes of US World War II Gen. Omar Bradley’s famous quote that “amateurs talk strategy, professionals talk logistics.” And he is not the first to have detected a lack of professionalism in Russia’s military, which includes hundreds of thousands of conscripts.

In one notorious incident early in the war, a 40-mile (64-kilometer) convoy of Russian tanks, armored vehicles, and towed artillery became stalled 19 miles (30 km) outside Kyiv, bogged down according to Britain’s Ministry of Defense not only by Ukrainian resistance but “mechanical breakdowns” too.

Last month, US Defense Secretary Lloyd Austin told CNN’s Don Lemon that Russia had made “missteps” and “struggled with logistics,” while on Saturday a senior US defense official said the Russians had still not solved “their logistics and sustainment problems” and would be unable to reinforce their forces in eastern Ukraine “with any great speed.” 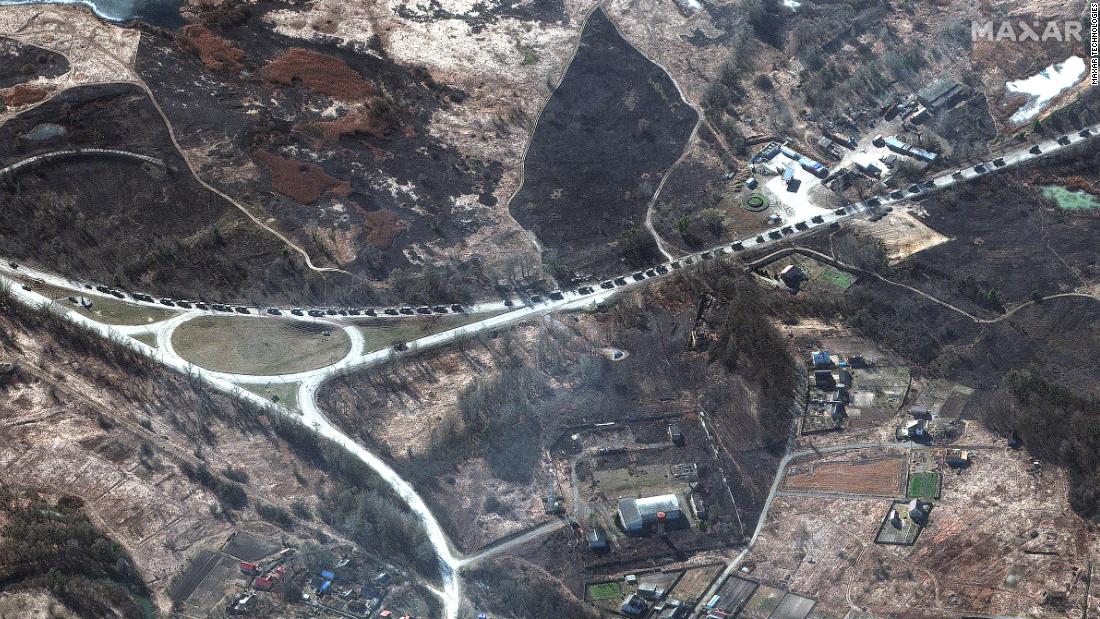 A satellite image of the stalled 40-mile-long convoy of Russian tanks, armored vehicles, and towed artillery in southern Invankiv.

Phillips O’Brien, professor of strategic studies at the University of St Andrews in Scotland, sees another “bad sign” for Russian truck logistics: its use of civilian trucks to replace military ones lost in battle.

The rigors of war are already trying enough for the sturdiest military grade truck, let alone a civilian one.

“A single mile in peacetime, if you drive it in wartime is like 10 or 20 miles (16 to 32 km) because you are pushing the truck hard with huge payloads,” O’Brien says.

Switching between the two introduces a maintenance problem, as spare parts may not be compatible. And, as O’Brien points out, “You don’t want to have to get a new truck every time an old one breaks down.”

Compounding the problem, according to Alex Vershinin, a former US Army officer who served four tours in Iraq and Afghanistan, is that when vehicles do break down Russia has limited resources to recover them. 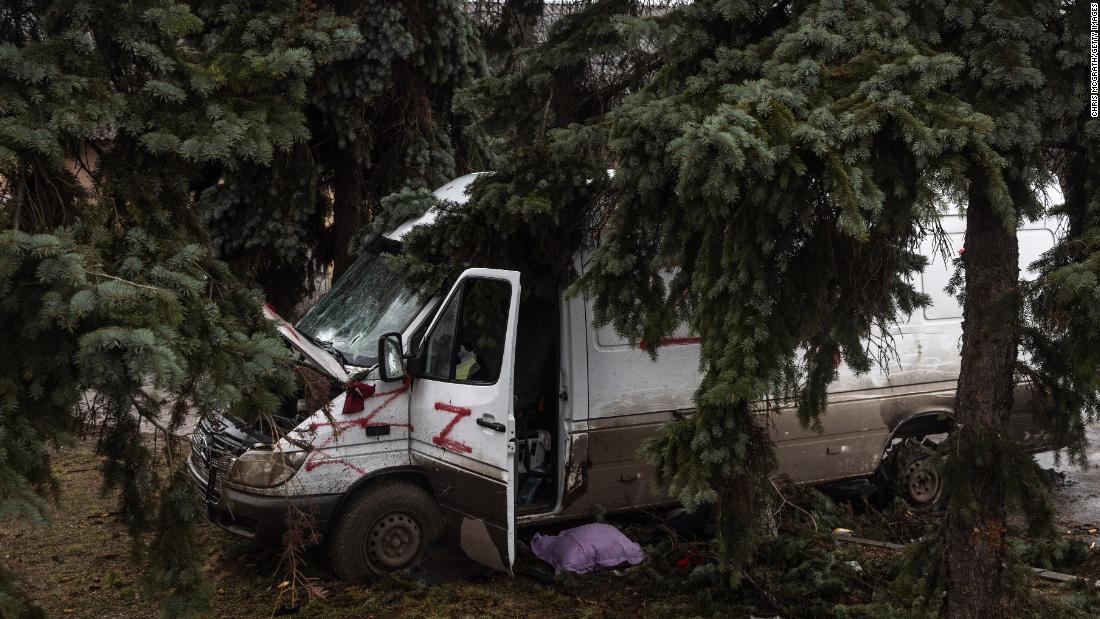 An ambulance truck marked with a “Z” is seen destroyed at the central train station that was used as a Russian base in Trostyanets, Ukraine, on March 30.

The Russian army’s battalion tactical groups — those at the spearhead of its advances into Ukraine — normally have only one light and one heavy recovery vehicle, even in units featuring dozens of vehicles, Vershinin wrote last month for the US Military Academy’s Modern War Institute. This means combat vehicles sometimes need to be diverted to towing duties and sometimes broken down “vehicles need to be towed up to a hundred miles,” wrote Vershinin.

O’Brien suggests Russia has neglected its trucks largely because they are not glitzy enough for a military keen to show off its cutting edge weapons systems.

In recent years, Putin has boasted about Russia’s hypersonic missiles like the Zircon and Kinzhal, stealth fighter jets like the Su-57, and its modern fleet of 11 ballistic missile submarines.

“Often glamorous dictator militaries are good at the showy weapons, they buy the fancy aircraft and the fancy tanks, but they don’t actually buy the less glamorous stuff,” O’Brien says. 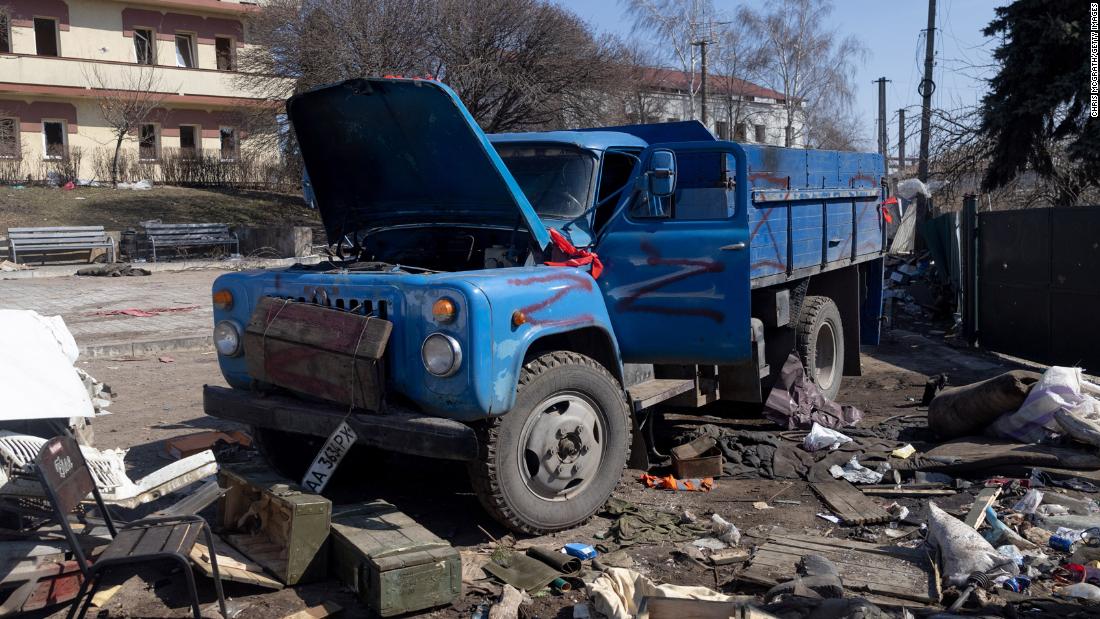 A truck that was being used by the Russian military lies destroyed in Trostyanets, Ukraine, on March 29.

At the root of Russia’s logistical problems, experts say, are two things that plague its military: conscription and corruption.

About 25% of the Russian military’s million troops are conscripts, according to the Center for Strategic and International Studies — though many experts believe that figure may be misleading, suspecting some of the non-conscript troops are either coerced or tricked into enlisting.

Russia’s conscripts tend to serve one-year stints, occupy the lower ranks, and fill many of the positions in the logistics chain, including vehicle maintenance.

“You can’t really learn anything in a year about maintaining military systems,” Telenko says.

Conscripts also have little motivation as they know their time in the job is so limited, he says.

A senior US defense official said Wednesday said Washington is seeing morale problems among Russia’s conscripts, who make up “almost half” of its forces in Ukraine.

By contrast, in the US military vehicle maintenance is handled by a volunteer non-commissioned officer corps, professional sergeants and corporals who stay for extended enlistments and are motivated by pay rises and promotions.

“You want to have as good people maintaining logistics as you do for every other branch,” says O’Brien, at the University of St Andrews. He adds, in reference to Russia’s apparent struggles, “Were they in a shape for a logistics war or did they not just take it seriously?”

Then there is the corruption that experts say has dogged the Russian military for years.

Matthew Stephenson, a Harvard Law School professor and editor in chief of the Global Anti-corruption Blog, wrote in March that corruption had a particularly corrosive effect on the Russian military’s maintenance and supply logistics.

“All of these problems that anti-corruption experts and national security specialists had been emphasizing for years do seem to be manifesting in the current Russian invasion,” he wrote.

“Corruption — in the form of embezzlement or bribery — can also lead to the purchase of substandard equipment, for example by giving the contract for equipment or maintenance to a less qualified supplier that is more willing to pay kickbacks. Or the person in charge of allocating the maintenance or procurement budget can simply report spending the full budgeted amount on high quality products or services, but then purchase low quality substitutes and pocket the difference.

Telenko’s view is that some of the effects are now being seen on the battlefield. He says money that should have been used for maintenance is “likely lining the pockets of officers in charge of the conscripts who would be servicing the trucks.” 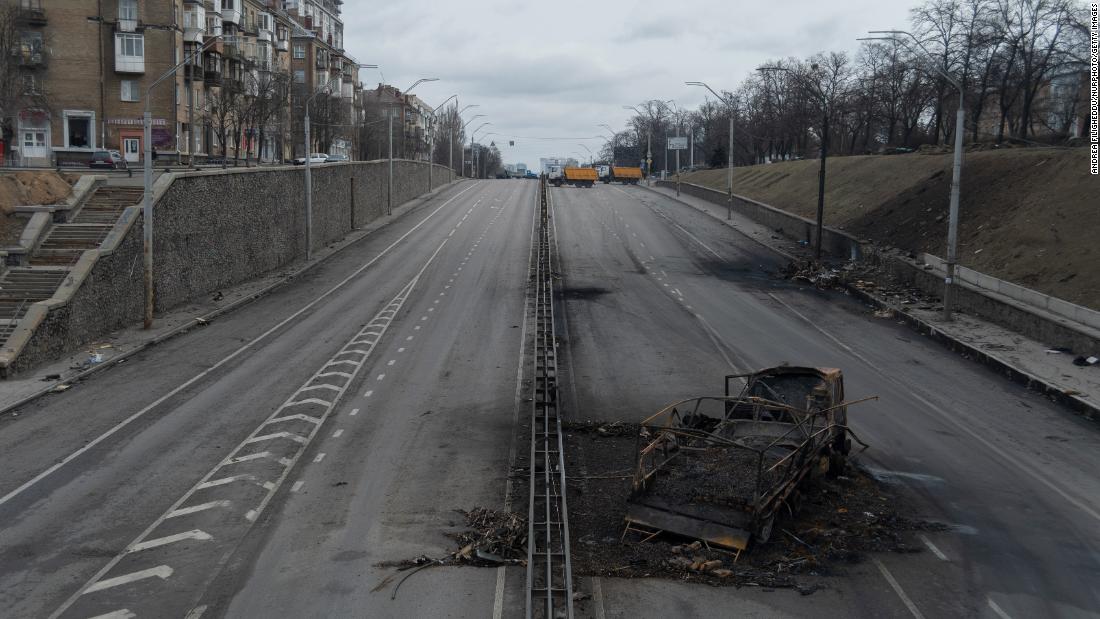 The aftermath of an explosion that destroyed a Russian truck in the streets of Kyiv, Ukraine, on March 4.

A truck too far?

There are other, subtler, signs of Russian struggles that might easily be missed by anyone who isn’t logistically minded, experts say.

For instance, says Alex Lord, Europe and Eurasia analyst at the Sibylline strategic analysis firm in London, Russia’s military has historically relied on its large manpower reserves to handle logistics, rather than mechanized systems using wooden pallets and forklifts.

This makes Russian logistics around 30% less efficient than leading Western militaries, says Jason Crump, CEO of Sibylline and a veteran of 20 years in the British military.”This means that it takes more trucks to do a given task in the same time, so greater fuel use and wear and tear,” Crump says.

“This provides opportunities for Ukrainian forces to target them — as we have seen Ukrainian commanders exploit numerous times during the current campaign,” he says.

All these problems only exacerbate the problems facing Moscow in what is already an uphill struggle for its forces given the distances involved.

Trucks can usually operate up to 90 miles (145 kilometers) from their supply depot, Telenko points out.

That means Russia would need to open numerous supply depots inside Ukraine for its troops to advance farther into Ukraine’s interior.

With Moscow already pulling back under fierce Ukrainian resistance that seems like a tall order. Russia is already thought to have lost a substantial number of trucks.

Building more to replace them could take at least six months, Telenko estimates, by which time more losses would be likely.

“I don’t see how the Russians can maintain their current positions, let alone make any offensive moves with their current truck fleet,” he says.

“Trucks are the backbone of any modern mechanized military force, and if you don’t have them you walk.”