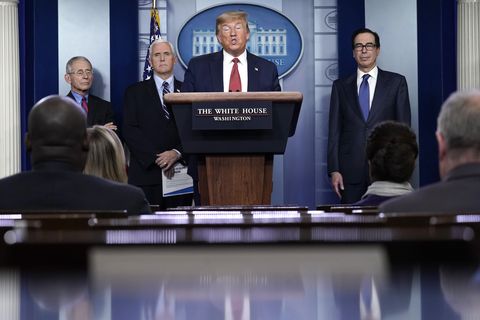 Return with us now to those thrilling days of yesteryear, courtesy of Politico, back to when we had an actual president who was up to the actual job.

But according to a previously unrevealed White House playbook, the government should’ve begun a federal-wide effort to procure that personal protective equipment at least two months ago.

“Is there sufficient personal protective equipment for healthcare workers who are providing medical care?” the playbook instructs its readers, as one early decision that officials should address when facing a potential pandemic. “If YES: What are the triggers to signal exhaustion of supplies? Are additional supplies available? If NO: Should the Strategic National Stockpile release PPE to states?”

The strategies are among hundreds of tactics and key policy decisions laid out in a 69-page National Security Council playbook on fighting pandemics, which POLITICO is detailing for the first time. Other recommendations include that the government move swiftly to fully detect potential outbreaks, secure supplemental funding and consider invoking the Defense Production Act — all steps in which the Trump administration lagged behind the timeline laid out in the playbook.

Sounds like a handy thing to have lying around during a pandemic, no?

The Trump administration was briefed on the playbook’s existence in 2017, said four former officials, but two cautioned that it never went through a full, National Security Council-led interagency process to be approved as Trump administration strategy. Tom Bossert, who was then Trump’s homeland security adviser, expressed enthusiasm about its potential as part of the administration’s broader strategy to fight pandemics, two former officials said. Bossert declined to comment on any particular document, but told POLITICO that “I engaged actively with my outgoing counterpart and took seriously their transition materials and recommendations on pandemic preparedness.”

And good for you. Of course, the administration*, filled with All The Best People, ignored this document—which was drafted decades ago, in 2016.

An NSC official confirmed the existence of the playbook but dismissed its value. “We are aware of the document, although it’s quite dated and has been superseded by strategic and operational biodefense policies published since,” the official said. “The plan we are executing now is a better fit, more detailed, and applies the relevant lessons learned from the playbook and the most recent Ebola epidemic in the [Democratic Republic of the Congo] to COVID-19.”

The evidence supporting this contention is, of course, everywhere. And I do mean everywhere.

But under the Trump administration, “it just sat as a document that people worked on that was thrown onto a shelf,” said one former U.S. official, who served in both the Obama and Trump administrations. “It’s hard to tell how much senior leaders at agencies were even aware that this existed” or thought it was just another layer of unnecessary bureaucracy.

When this all settles down, we are going to need a truth commission to sort out all the bungling and temporizing and malfeasance that has been such a big part of this administration*’s response to the pandemic. And then maybe another one to sort out how we elected these characters in the first place.