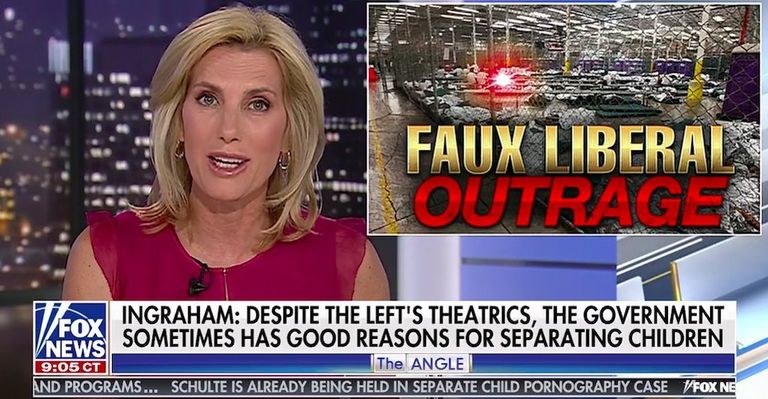 Donald Trump seized control of the Republican Party by channeling the resentful id of talk radio and Fox News. This was most apparent on immigration, where Trump depicted undocumented Mexican migrants as rapists and criminals to kick off his campaign. From there, he has only ventured deeper into the abyss. Fox News has followed him all the way, and it seemed sadly inevitable that they would back him this week amid a national firestorm over the emerging human rights crisis on our southern border.

But as the Fox power players returned to their broadcast chairs for Monday night primetime, what we got was even uglier than expected. Leading the way was Laura Ingraham, who responded to reports on the severe trauma children were experiencing as they were torn from their parents’ arms by suggesting they were getting a free ride to Camp Winnepesaukee. 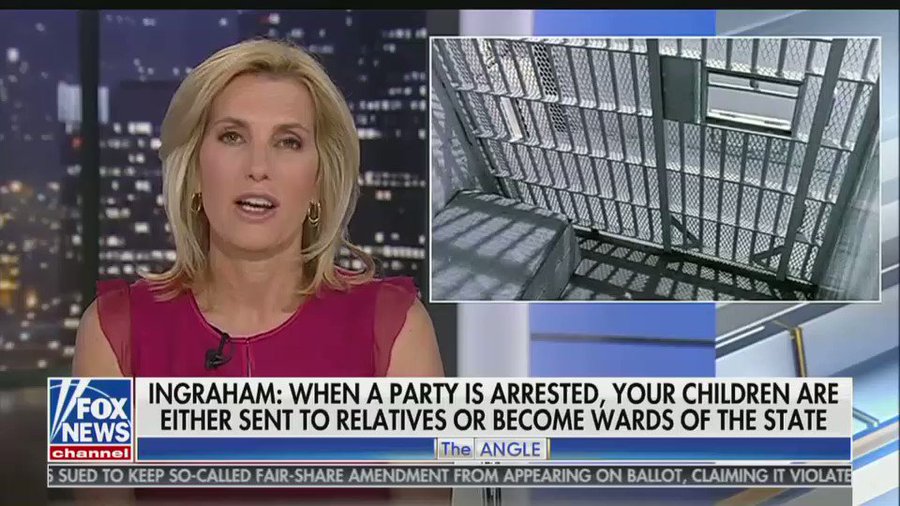 It’s rare that you get to watch someone’s soul leave their body on national TV, dribbling out the side of their mouth as they explain how cozy kids have it as they’re kept in cages ahead of being dragged away from the one sense of security they still have left, their parents, after an often traumatic thousand-mile journey to escape horrific circumstances back home.

The immediate question was whether Ingraham would be sending her kids to one of these “summer camps” this July. Perhaps she’s eying the new tent city outside El Paso, Texas, where it will be an average of 96 degrees each day that month. Or maybe we just learned something about the Fox host’s childhood that might have led her to become such an unreconstructed ghoul as an adult. Surely something must lead you to, as a college student, try to out your LGBT peers by secretly recording them at a support group meeting, as Ingraham did.

Just to test her theory, here’s audio, obtained by ProPublica, of children who were just separated from their parents and put in summer camp.

Does that sound like the summer camp you went to? Or does it sound like the kind of thing that will make it into documentaries about this period, a chilling final testament to the human cost of this administration’s performative cruelty? Of course, the surest sign that it’s not all sunshine and roses is that Trump, the consummate coward, refuses to take responsibility for the separations in public, blaming Democrats and lying incessantly about “enforcing the law.” This is not the law, it is the policy of the Trump administration.

It’s not enough to suggest the kids have it good, though. You also have to demonize them as potential violent criminals—and use one of the president’s favorite buzzwords as you do it:

Some of these kids are toddlers. That can be easy to forget, since authorities only seem interested in allowing media and elected officials access to the facility in Brownsville, Texas, where boys aged eleven to seventeen are kept. But that is just one facility—where they probably think has the least sympathetic detainees—in which unaccompanied children, an increasing number of whom were forcibly separated from their parents, are held. Ingraham would like the separated kids to all be sixteen-year-old boys who she can paint as potential violent gangsters. What about the five-year-old girls, who are kept in facilities authorities won’t tell us about and won’t let us see?

That is why it never mattered whether Trump called all undocumented immigrants “animals,” or just MS-13. His rhetoric on immigration is constantly dehumanizing: he calls the alternative to his family separation and detention program “catch and release,” like we’re hunting or fishing. (It is also not an accurate characterization of how the previous program worked.) He has never made a distinction between violent criminals and peaceful people who come here seeking a better life but don’t have proper documentation. And it’s not just his rhetoric—it’s his policy, too: 40 percent of those his administration deports are noncriminals.

It’s unlikely there’s much of a distinction in the minds of his followers, which might explain why 55 percent of Republicans support family separation. It’s easy to separate animals from their parents—we do it every day.

One example of this non-distinction is Fox News’ Brian Kilmeade, who mirrored Ingraham’s insane MS-13 scaremongering—again, about a group of children, some of whom are toddlers. It appears the Fox & Friends host is getting high on his own supply of uncut white resentment, which led to an incredibly ugly rant from the Couch of Great American Discourse Tuesday morning: 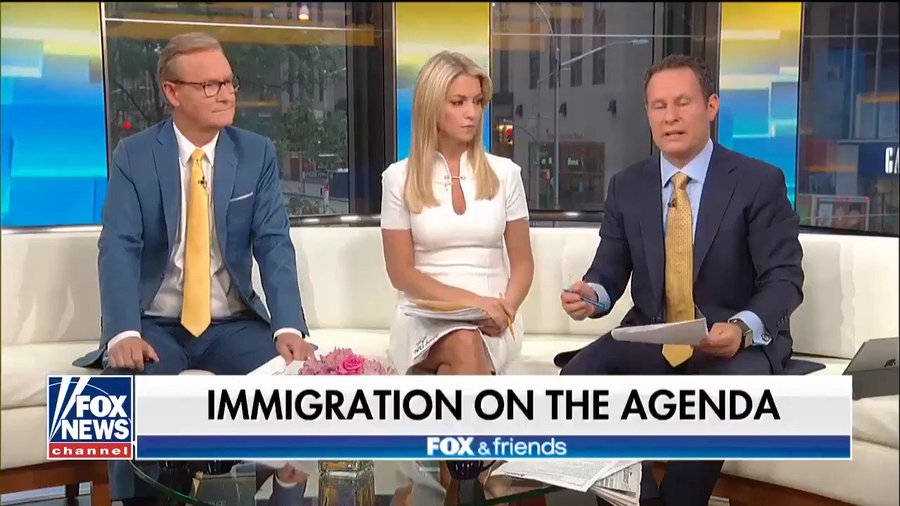 This is nuts. First off, it’s a bit of vintage nativism, suggesting immigrants are a drain on society when the undocumented contribute more in taxes than they receive in benefits. Also, Kilmeade is a millionaire TV host and it seems incredibly unlikely there are MS-13 members in his neighborhood. But the key point is his assertion that immigrants are the cause of, or will only exacerbate, social problems. Kilmeade, who is a steadfast supporter of anyone with an “(R)” next to their name, included this in his rant:

We are $20 trillion in debt, we have classrooms that are overrun, we have teachers buying their own supplies…

The Party of Fiscal Responsibility just ballooned the national debt with a tax cut that will add $1.9 trillion and a spending bill that will add $1.3 trillion. Meanwhile, last year, House Republicans sought to cut the education budget by $2.4 billion, or 3.5 percent. That pales in comparison to the Trump administration’s proposed cut of $9.2 billion. But this, Kilmeade says, is about underfunded schools. Who is the real threat to high-functioning American public schools: immigrant kids, or politicians who spend nearly all their time catering to the donor class?

But the symbiosis between this administration and its primary pravda network would not be complete without an appearance from Attorney General Jeff Sessions—who orchestrated and has repeatedly defended the family separation policy, sometimes citing the Bible in an ultra-authoritarian Evangelical interpretation—on Ingraham’s show. The dehumanizing rhetoric and cruel treatment of these people, along with the new addition of actual concentration camps, has led some to make Nazi comparisons. Sessions dismissed this as silly—the Nazis wanted to kill people, not deport them!

Axios: INGRAHAM: “[Lawmakers are comparing this policy to] Nazi Germany, concentration camps, what’s going on here?”
SESSIONS: “It’s a real exaggeration. In Nazi Germany, they were keeping the Jews from leaving the country but this is a serious matter.”

Of course, in the beginning, the Nazis primarily sought to expel the Jews from Europe. But history doesn’t matter, you see—that’s why they’re cutting the education funding! Just from a PR standpoint, though, the first distinction you should probably draw between yourself and Nazis is that you do not, presumably, have a genocidal hatred for a societal subgroup that you constantly dehumanize and blame for society’s problems. The logistical differences should come after.