DYMER, Ukraine (Reuters) – Volodymyr Khropun and Yulia Ivannikova-Katsemon say they were helping people flee villages on the front line in northern Ukraine when they were detained by Russian soldiers over two days in March.

Both said they were then held with around 40 other captives on the concrete floor of a nearby factory, their hands bound. Nearly a week later they were transferred in a military truck to Belarus, and on to detention centres in Russia, they said.

Khropun, an electrical engineer, and Ivannikova-Katsemon, an emergency services dispatcher, were freed with 24 others in a prisoner exchange on April 9.

Standing outside the dank windowless room where they say they were kept in the formerly occupied village of Dymer, north of the capital, Khropun and Ivannikova-Katsemon have returned to describe their three weeks in Russian custody, which they said included being beaten. Ivannikova-Katsemon also said she was tasered. 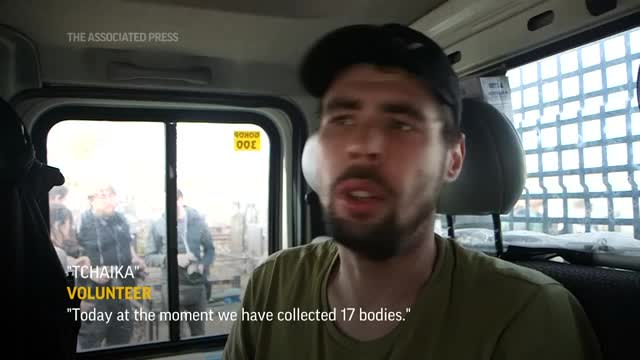 Ukrainian volunteers continued collecting bodies of those killed in the Ukrainian town of Bucha on Thursday, as outrage rises over alleged atrocities carried out by Russian forces in areas near Kyiv. (April 7)

Both said they were working as volunteers for the local Red Cross when they were taken prisoner, interrogated and accused of passing information on the activity of Russian forces to the other side, which they deny.

The Ukrainian Red Cross confirmed they were both volunteers. They were both reported as missing or illegally detained civilians by the Euromaidan SOS initiative of Ukrainian human rights group The Center for Civil Liberties as of March 26.

Reuters was not able to independently verify all the details of their stories. The Kremlin and Russia’s defence ministry did not respond to requests for comment about their accounts.

Khropun and Ivannikova-Katsemon’s detailed narratives shed more light on the mistreatment Ukraine alleges some of its citizens and soldiers have faced in Russian captivity since the start of the war. Their journey also shows one way Russia has transferred some of the hundreds of Ukrainian prisoners it says it holds to Russian territory.

Since the start of the war on Feb. 24, Ukraine and Russia have accused each other of violating the Geneva Conventions that cover the protection of civilians during war and the treatment of prisoners of war.

In March, Russia’s human rights ombudswoman said she had heard about cases of “cruel and inhuman treatment” of Russian POWs in Ukraine.

This month Ukraine’s human rights ombudswoman said returning POWs had described mistreatment while in Russian captivity that included being kept in basements, denied food and made to take off their clothes.

Authorities from both sides have repeatedly said they abide by international humanitarian law in terms of treatment of prisoners.

Speaking in the factory in Dymer, Khropun described what happened when he was first detained by Russian forces, after driving evacuees through a checkpoint on March 18.

“They arrested me, closed my eyes – as in, they pulled a hat over my eyes, bound it on with scotch tape – and then wrapped my hands in tape, like a terrorist. Then I was transferred here,” said Khropun, 44.

“There was always hope with God that I would return (home),” said Ivannikova-Katsemon, who has children, occasionally pausing to steady her voice or hold back tears. “The hard thing was not being able to tell family and friends that I was alive and in captivity.”

The two said they were held in an unheated room at the small factory in Dymer, huddled on thin mattresses and scraps of cardboard. Around 40 detainees were crammed into the space, sharing a plastic pot for a toilet.

“It was like a nightmare come to life,” Khropun said, speaking to Reuters back in the room where he was held.

He pointed to the dirty mattress he shared with several others. The floor was littered with trash, empty boxes of Russian army rations, zip ties and loops of tape that they said had bound people’s hands.

Ivannikova-Katsemon described how she was able to slightly loosen the binding around her wrists with a safety pin that she kept hold of throughout her time in captivity by hiding it inside her hair tie.

The Russians brought food once or twice a day, mostly army crackers and the occasional pot of cooked food. There were only two plastic spoons so some people ate with their hands, others with scraps of paper, said Khropun.

One of the spoons was still jabbed into a pot that was half-full of what looked like rotting cabbage stew.

A bullet hole was visible in the concrete ceiling of the room. One of the guards had fired into the air to spook them, they said.

After nearly a week, Khropun and Ivannikova-Katsemon said that they and around 14 other detainees were loaded onto a military truck. They weren’t told where they were going, but the stop-start journey through Belarus would eventually take them to official detention centres in Russia.

In Belarus, they said they were interrogated by the Russian military. They each received a document that included their photo, date of birth, height, hair colour and other identifying details that designated them as “a person who has shown opposition to the special military operation” – Russia’s term for its war in Ukraine.

They showed Reuters copies of the documents, titled ‘Certificate of Identity’ and issued by the Russian armed forces.

“The first stage was being stripped naked, photographed, the noting of scars, I have a few. Then the pouring of water (on me) and a beating,” Ivannikova-Katsemon said. The document she received lists her scars in a section called “Other features”.

Once in Russia, the two said they passed through several different detention centres. At one point, Ivannikova-Katsemon said she was told she would be sent to work in a timber camp in Russia’s far east.

“I don’t know the place, they just said: Siberia,” she recalled.

Khropun said he faced multiple interrogations in Ukraine, Belarus and Russia, sometimes being forced to kneel for long periods in cold rooms or beaten on his knees or ribs.

He said younger prisoners were singled out for especially tough beatings by guards, who also shaved the captives’ heads and beards, sometimes leaving a tuft or half a moustache as a form of humiliation.

He said he tried to keep up the morale of his fellow detainees, who he said were also Ukrainian civilians. “I’d say, ‘guys – we will all get home 100%. There is just one small question: when?'”

On April 8, the two said they were given back the clothes they were wearing when first detained, still dirty from the days spent on the factory floor.

In handcuffs, they were taken by plane to Crimea from where they were driven by truck to Ukraine-controlled territory on April 9.

They said they had been selected for a prisoner swap, but did not know why they were picked over others.

After around three weeks in captivity, they were home.

“Of course there was the sense of joy, but it was somehow hard to fully comprehend,” said Khropun.

Khropun and Ivannikova-Katsemon said they were the only ones to be exchanged from the group of detainees who were sent from Dymer to Russia. They described their fears for the others they believe are still being held in Russia.

The Ukrainian authorities have confirmed that 26 prisoners were swapped with Russia on April 9, but have not named them all. The office of deputy Prime Minister Iryna Vereshchuk, who is in charge of negotiating the swaps, did not respond to a request for comment about the release of Khropun and Ivannikova-Katsemon.

On April 11, Vereshchuk said in total some 1,700 Ukrainian soldiers and civilians were being held in Russia and by pro-Russian separatists in the east of the country.

Ukraine held around 600 Russian military prisoners of war and no civilians as of April 4, according to Vereshchuk.

Russia does not release exact figures, but in late March its human rights ombudswoman said there were more than 500 Ukrainian POWs in Russia.

Ivannikova-Katsemon said she wears a medical corset and takes medicine to manage the pain she feels as a result of her treatment in captivity.

“But these monsters, who supposedly call themselves liberators, did not break me,” she said, standing in the spring sunshine outside the Dymer factory.