Russia’s invasion of Ukraine is ‘not going particularly well’ and the Kremlin is ‘getting more desperate’ as Vladimir Putin’s troops feel ‘let down’ by their leaders, a minister has claimed.

Western officials believe Putin had hoped to have Ukraine well under his control within days of launching the invasion, but say poor planning, bad leadership and a fierce line of resistance from the Ukrainian people have stalled the Russian progress.

The US defence office has claimed Russia has deployed nearly all the 150,000 troops who were stationed on the border, but has only “made little progress”.

An unnamed official added the Russians are “frustrated by a stiff Ukrainian resistance as well as their own internal challenges”.

The nation’s largest cities are still under Ukrainian control, but coming under constant Russian bombardment as Putin’s force step-up their campaign of misery.

“On one level sadly there’s lots of casualties, we’ve seen the indiscriminate shelling which has killed numerous civilians.

“We’ve also recognised that probably the biggest casualties so far in the war are Russian military soldiers who have been let down by appalling leaders, appalling leadership and appalling plans, and now you see them literally at large scales dying.”

On Wednesday, Russia admitted for the first time admitted it had suffered heavy losses, saying in a statement 498 of its troops had died.

The UK has said the death toll will be “considerably higher” than figures released by the Kremlin.

Ukrainian officials have claimed over 9,000 Russian soldiers have died. The figure has not been independently verified.

“I think that is something that will be seen in the Kremlin, whether they will admit to each other the failure of their aggressive and illegal invasion of Ukraine,” Wallace added.

A 40-mile-convoy of around 15,000 soldiers has been spotted outside of Kyiv for days now, but has stalled, reportedly due to supply issues.

Wallace added: “We’ve seen the column is still stuck north of Kyiv, there are reports overnight of Ukrainian special forces destroying over 20 Russian helicopters and I think we can see that Russia have a real logistic problem. 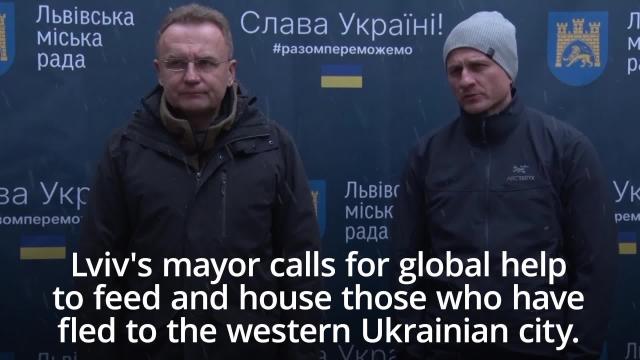 The mayor of Lviv calls for international help because the city in far western Ukraine is struggling to feed and house the thousands of people who have fled there from war-torn regions of the country.

“I think this goes right to the heart of the challenge that Russia has built itself a trap and the international community has united against them and we’re seeing the devastation that it’s leaving behind.”

The UN’s latest figures have say 2 million refugees have fled their homes and gone into neighbouring countries for safety.

The capital of Kyiv and second-largest city of Kharkiv still remain under the control of the Ukrainians but have come under severe shelling from Russian forces.

International attention has turned to the town of Irpin in recent days, after Putin’s troops shelled humanitarian corridors which had opened up for people to evacuate.