The Ukrainian government has released a new video encapsulating what it says is the scale of destruction caused by Russia’s invasion.

The country has come under Russian fire for 26 days, with the heavy bombardment of major cities becoming increasingly intense in recent days.

In a video shared on the Ukrainian Armed Forces Twitter page on Sunday, President Zelenskyy laments what has been lost in less than a month of war.

“‘Was’ – a simple verb. Merely a part of speech used in every day life,” he says.

“But it’s not that simple for us. Because now the everyday Ukrainian simply cannot say “was” without bursting into tears.

Read more: 6.5 million people displaced inside Ukraine due to war

“The millions and millions of Russian wounds are bleeding.

“Russia has drowned Ukraine in tears and blood and children’s corpses.”

But Zelenskyy also looks to the future, telling citizens they will rebuild and start anew.

He says: “But there is one thing Russia doesn’t get. ‘Was’ is the word that describes its life. And we Ukrainians already know what will come next.

“There will be a new story. Those we’ve lost will be remembered.

“And we will sing again, and we will celebrate anew.

“Ukraine was beautiful but now it will become great.”

It is widely believed Putin’s invasion has not gone as expected. Western officials say a combination of poor leadership and strategy plus fierce resistance has meant slower than expected progress.

As a result, Russia appears to have embarked on a deadly war of attrition. Britain’s chief of defence intelligence Lieutenant General Sir Jim Hockenhull said the Kremlin has been forced to switch tactics, turning to the “reckless and indiscriminate” use of firepower which will inevitably lead to more civilian casualties.

The Russians have “enormous” stocks of artillery ammunition and could maintain their bombardment for weeks in an attempt to force Ukraine into submission, Western officials say.

The capital of Kyiv has been a key target for Putin’s forces, with British military intelligence suggesting Russian forces still remain more than 25km outside of the city centre and are likely to try to encircle the city over the coming weeks. 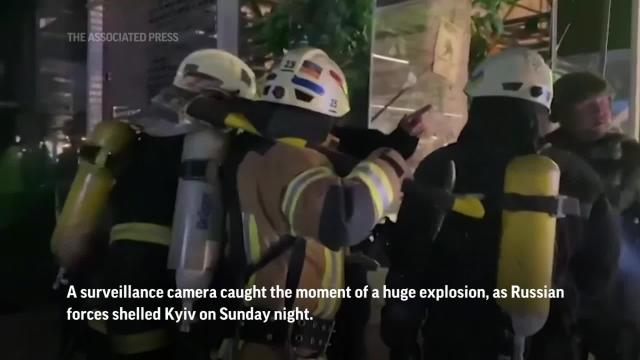 Shelling by the Russian military destroyed a shopping center near the center of Kyiv, Ukraine on Sunday night. The attack left at least six dead, according to Associated Press journalists at the scene. (March 21)

And in the northern Ukrainian town of Novoselytsya, people were told to seek shelter after a fertiliser plant was shelled in the early hours of Monday morning.

Sumy regional governor, Dmytro Zhyvytskyiy, said one of the ammonia tanks was damaged, spilling chemicals into the air.

“As a result of Russian enemy shelling, a tank with ammonia with a capacity of 50 tonnes was damaged,” Zhyvytskyiy said, adding that there was no threat to the nearby population of the city of Sumy.

Zhyvytskyiy added the area within a 2.5km of the plant was dangerous, advising people should shelter in shelters and basements, describing ammonia as a “colourless gas with a pungent suffocating odour”.

“Ammonia is lighter than air, therefore shelters, basements and lower floors should be used for protection,” he said in a Telegram message.