The U.S. Embassy in Ukraine said Russian troops “shot and killed 10 people standing in line for bread” on Wednesday in the decimated northeast Ukrainian city of Chernihiv. The embassy did not cite what evidence it had of the attack in a statement posted on its official Twitter account.

“Such horrific attacks must stop,” the Embassy said in the tweet, adding that the U.S. government was “considering all available options to ensure accountability for any atrocity crimes in Ukraine.”

Will Russia face justice for alleged war crimes in Ukraine?

With each day, the cost in human lives and suffering of Russia’s war on Ukraine rises. The United Nations human rights office has registered about 600 civilian deaths, but the U.N. acknowledges the real toll is certain to be far higher. Ukrainian officials say thousands have been killed — more than 2,000 in the besieged southern city of Mariupol alone.

Video: A look at the treatment of Ukrainian refugees at border crossings 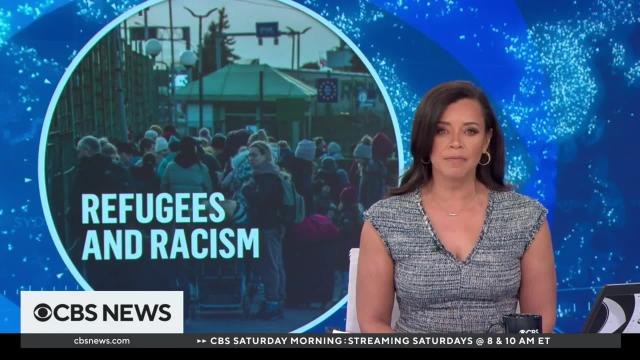 There was little information on the alleged attack on civilians lining up for food in Chernihiv, but video posted to social media showed the purported aftermath, with a number of bodies on the ground.

One of those to post the video was Oleksandr Merezhko, deputy head of the Verkhovna Rada, Ukraine’s parliament, and chair of its Foreign Affairs Committee.

“Russians have killed more than ten people who were standing in line to buy some bread,” he said in his tweet.

The alleged attack came a day after Ukraine’s general prosecutor’s office said a Russian artillery strike had hit a university and open-air market in Chernihiv on Monday, killing 10. It was one of many strikes to hit the city over the last three weeks.

The governor of the region said Wednesday that electricity had been cut to Chernihiv city and some surrounding towns and villages, but the Reuters news agency quoted Governor Viacheslav Chaus as saying Ukraine’s armed forces were dealing “powerful blows on the Russian enemy every hour.”

On Tuesday, Reuters interviewed Mykola Vasylinko in Kyiv, who said he had just fled to the capital from Chernihiv, where the situation was “much worse.”

“This is no Chernihiv,” he told Reuters. “They [Russian forces] have tried to erase [it] from the Earth’s surface. They bomb residential areas, they specifically target residential buildings.”

Chernihiv is one of several large cities very close to Ukraine’s northeast border with Russia that have come under blistering artillery fire since Vladimir Putin ordered the invasion and air war against Ukraine to start on February 24.