U.S. consumer debt is now above levels hit during the 2008 financial crisis 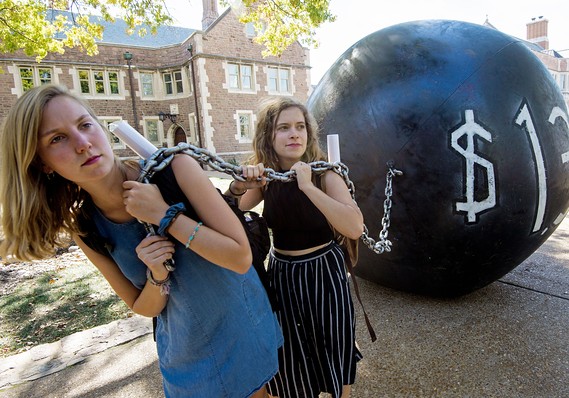 Ben Mohr, senior research analyst of fixed income at investment consultant Marquette Associates, calculated that total U.S. consumer debt hit $14 trillion in the first quarter of 2019, surpassing the roughly $13 trillion of leverage accumulated in credit cards, auto loans and mortgages and other debt back in 2008, when those souring loans and securities pegged to them helped to send global markets into a tailspin (see attached chart).

Mohr told MarketWatch that the increase in student loans — often cited as a source of consternation for economists and strategists — saw a notable increase. At the end of the first three months of 2019, student loan debt hit $1.486 trillion, according to credit data from the New York Federal Reserve. By comparison, student loan at the height of the financial crisis was $611 billion and has been mostly rising since, Mohr said. “It has ballooned and that’s a dramatic increase,” the fixed-income analyst said of the student-debt expansion.

Analyzing growing consumer leverage another way, Mohr said the ratio of debt compared against the U.S. population estimated at 327 million, according to U.S. Census Bureau data, translates to a record per-person debt ratio at $41.77, surpassing the ratio of $41.68 back in 2008.

Concerns about ballooning debt come as U.S. equity markets have been trading at or near records, with the Dow Jones Industrial Average 0.4% short of its all-time high, and the S&P 500 index notching its first record since April 30 on Thursday, while the benchmark 10-year Treasury note is hovering not far from its lowest levels in months at 2.06%.

Those market moves come against a backdrop of a Federal Reserve that is considering reducing borrowing costs for individuals and corporations from an already relatively benign range of 2.25%-2.50%.

So, should we be worried about rising consumer debt?

Mohr says there are some mitigating factors. Gross domestic product, the official scorecard of the U.S. economy, demonstrates an economy in far better shape than it was during the financial crisis. GDP, which includes all goods and services produced, expanded 3.1% in the first quarter of 2019, compared against 2008 when the overall economy contracted at an annual rate of 6.3%, according to the Bureau of Economic Analysis.

The Marquette analyst also noted that defaults on debt are tame, suggesting that investors aren’t being overwhelmed by the growing obligations. A pickup in loan delinquencies was a telltale sign that the economy was beginning to crack under the weight of debt, but Mohr said consumer delinquencies today are trending near historic lows.

Historically low interest rates have helped consumers to manage debt and the Fed may further help that cause soon by complying with market wishes for yet-lower borrowing costs.

That said, if the economy does begin to contract into recession as some economists fear, the debt load could be a more pressing matter. “We are starting to see some chinks in the armor,” Mohr said.

Mark DeCambre is MarketWatch’s markets editor. He is based in New York.