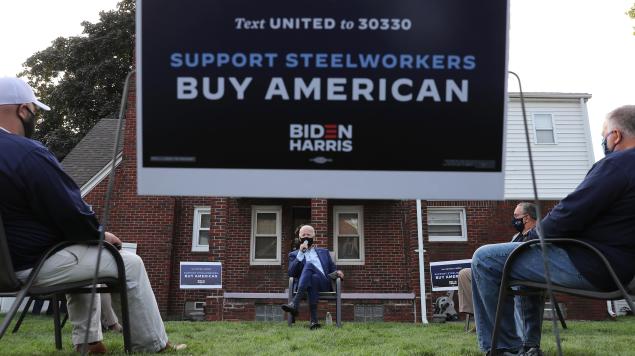 Democratic presidential nominee Joe Biden is visiting swing-state manufacturing regions to bash President Trump’s record on factory jobs. “President Trump has broken just about every promise he’s ever made to American workers and he has failed our economy and our country,” Biden said in Warren, Mich., on Sept. 9. Voters will hear a lot more of that. Biden specifically points to a manufacturing recession in 2019, the increased offshoring of jobs under Trump, and a slower pace of job creation under Trump than under the last three years of the Obama administration.

While running for president in 2016, Trump promised to “bring back manufacturing,” which may have helped him win crucial Rust Belt states like Pennsylvania, Ohio, Michigan and Wisconsin. Did he bring it back? The answer could very well determine who wins those states—and the White House—in 2020.

Business shutdowns associated with the coronavirus recession have hammered manufacturing, like many other sectors. Manufacturers have lost 720,000 jobs since February, though employers have been slowly rehiring since May. But some voters may give Trump a pass on the coronavirus and try to assess his record on manufacturing during the first three years of his presidency, before the virus upended things.

From that perspective, Biden’s criticism largely holds up. Trump claims to have created the “greatest economy ever” before the coronavirus arrived, which is a comical exaggeration. In many respects, the U.S. economy grew at a similar pace from the last three years of the Obama administration into early 2020. Overall employment growth slowed a bit under Trump, but wages rose, which is typical of an expansion moving from middle to later stages. On manufacturing, however, one factor—Trump’s trade disputes with China and other countries, and the protectionist tariffs he imposed on many imports—may have caused a manufacturing slowdown and undermined the promises Trump made in 2016.

After taking a huge hit during the 2007-2009 recession, manufacturing recovered at a consistent pace from 2010 to 2015, as the following charts show. There was a slowdown toward the end of Obama’s second term, but manufacturing output picked up again near the end of 2016 and continued into 2018. Then another slowdown occurred in 2019. Biden calls that a manufacturing recession, and technically, that’s correct, since it entailed two consecutive quarters of declining manufacturing output. Production recovered in the third quarter of 2019 but dipped again in the fourth quarter, before output plunged in 2020 amid the coronavirus outbreak.

During the manufacturing slowdowns in 2015 and 2019, hiring flattened out—but manufacturers didn’t start laying off workers. That’s probably because CEOs saw the softness as temporary, rather than the start of another recession. They turned out to be right. Production and employment picked up after each slowdown.

Biden blames the Trump tax cuts for the modest manufacturing recession in 2019, claiming they gave manufacturers an incentive to move some production overseas. But Trump’s trade wars were probably the more likely cause of the 2019 slowdown. Trump began imposing tariffs on many Chinese imports, along with steel and aluminum from other countries, in 2018, and most of these nations imposed their own retaliatory measures on U.S. exports. By 2019, the trade war some analysts expected to peter out was escalating, instead. Trump ultimately slapped tariffs on about $361 billion worth of imported goods, imposing a cost of about $57 billion on the U.S. economy, according to the American Action Forum think tank.

Before the coronavirus contraction, Trump could credibly that manufacturers created about 100,000 more jobs during the first three years of his presidency than during the last four years of Obama’s. The Trump tax cuts may have helped a bit, by boosting after-tax income at most companies. But Trump also benefited from the recovery he inherited, with many deep scars of the prior recession finally healing by the time Trump took office. And there’s no evidence of manufacturing jobs that had left for other countries returning to the United States during the last three years, as Trump promised.

Factoring in the coronavirus shutdown, manufacturing has lost 237,000 jobs during the entirety of Trump’s presidency, which still compares fairly well with the performance of other presidents. On the Yahoo Finance Trumponomics Report Card, Trump still ranks third out of the last seven presidents on manufacturing employment. That’s because the manufacturing sector lost even more jobs at the same point in the first term of Presidents Obama, both Bushes and Reagan. During Obama’s second term, things got better, with manufacturers adding 386,000 jobs.

Biden says he’ll do better than Trump, through tax incentives meant to punish companies sending work overseas and reward those reopening closed factories here at home. Biden also says he’ll establish more muscular Buy America policies for the federal government than Trump has. Factory workers hear these types of promises every four years, and sometimes decide to give the promiser a shot. That helped Trump in 2016, but now he’s the one who has to prove he kept those promises.