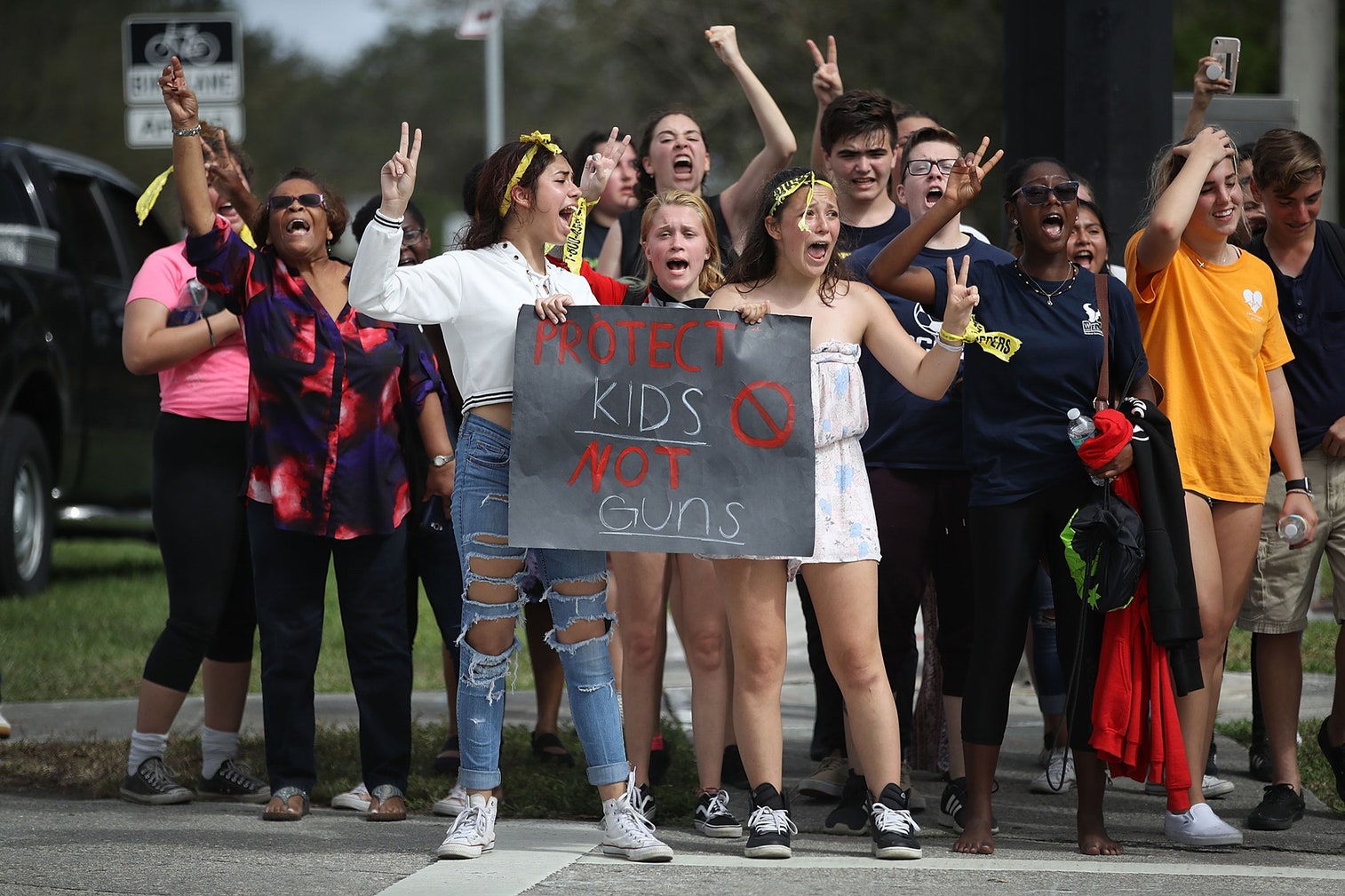 As usual, trump repeated the National Rifle Association’s tired talking points (a good guy with a gun…yada yada) , without thinking through the consequences of arming as many as 20% of America’s teachers and coaches, which amounts to introducing 700,000 loaded weapons into what should be sanctuaries of peaceful enlightenment, not armed encampments.

The Hill reported: both Republican Florida Governor Rick Scott and Sen. Marco Rubio (R-FL) broke with trump and are not in favor of arming teachers.

“The notion that my kids are going to school with teachers that are armed with a weapon is not something that, quite frankly, I’m comfortable with,” Rubio said at a CNN town hall event in the aftermath of last week’s Florida high school shooting.

Ex Florida Governor Rep. Charlie Crist, also thinks its a bad idea and sides with most Florida residents (more than 70%) who now believe in strict gun laws, and also believes assault weapons should be banned.

And from Marc Caputo and Rebecca Morin, in Politico: During a Broward County CNN town hall, “Facing jeers and boos, Rubio shifts on guns during tense forum…

“It was a striking turnabout for Rubio, who never met a gun-rights bill he didn’t vote for in the Florida Legislature and in Congress.” The mass shootings in Newtown, Orlando, Las Vegas and even Fort Lauderdale didn’t get Sen. Marco Rubio to seriously reconsider his position on guns.”

“But Rubio shifted on firearms Wednesday night as he weathered the righteous anger of a parent and of the students who survived the Valentine’s Day massacre at Marjory Stoneman Douglas High School and then faced him onstage in purple Florida’s liberal bastion of Broward County. Jeered and booed by the crowd, buffeted by tough questions, Rubio stood alone as the only Republican onstage. He said he would favor raising the minimum age to purchase an assault rifle from 18 to 21. And he said he would consider restricting the size of magazines for firearms. Rubio said he wanted to prevent another massacre and that it was time for everyone to start rethinking their positions.”

“It may not prevent an attack, but it may save lives in an attack,” he said, suggesting that three or four lives might have been saved in Parkland had there been some restriction on magazine size. Rubio said he would leave it to law enforcement to suggest what the right magazine size would be.”

“The time for talking in Washington about to do about guns is over. It’s over. We know what to do,” said Democratic Rep. Ted Deutch , who represents the district where the school is located, in the city of Parkland.”

“But Rubio steadfastly refused to consider banning semiautomatic rifles outright. And he said he would not refuse money from the National Rifle Association, which has steered $3.3 million in contributions to him over the course of his career and given him an A+ rating — support he might not be able to count on after Wednesday night.”

“In June 2016, Rubio cited the mass shooting at the Pulse nightclub in Orlando as a major reason he leapt back into his Senate race, which he’d been weighing doing for months after failing in the presidential primaries. Rubio said that massacre had “impacted” him and made him feel he had to return to the Senate. He won, with NRA support. But in the nearly two years since, he has not championed any new gun legislation in Congress.”

“The subject of Rubio’s NRA contributions was the low part of his night and the highlight for the crowd when CNN’s Jake Tapper gave high school junior Cameron Kasky the opportunity to confront Rubio.”

“Sen. Rubio, can you tell me right now that you will not accept a single donation from the NRA in the future?” Kasky asked. The room erupted with cheers and applause.

Rubio didn’t immediately answer.” Kasky then mused about confronting a spokeswoman for the NRA.

“So No. 1,” Rubio responded, “the positions I hold on these issues of the Second Amendment — I’ve held since the day I entered office in the city of West Miami as an elected official. No. 2 — no. The answer to the question is that people buy into my agenda. And I do support the Second Amendment. And I also support the right of you and everyone here to be able to go to school and be safe.”

Kasky cut him off and re-asked his question: “No more — no more NRA money?”

Rubio: “This is the wrong way to look — first of all, the answer is, people buy into my agenda.”

Rubio said that the influence of the NRA was not its money as much as “the influence … from the millions of people that agree with the agenda.”

Kasky: “In the name of 17 people, you cannot ask the NRA to keep their money out of your campaign?”

Rubio: “I think in the name of 17 people, I can pledge to you that I will support any law that will prevent a killer like this from getting a gun.”

“No,” Kasky responded, “but I’m talking about NRA money.”

“The evening didn’t start particularly well for Rubio, either, when he was questioned by Fred Guttenberg, whose 14-year-old daughter, Jaime, was killed last week in school.”

“Were guns the factor in the hunting of our kids?” Guttenberg asked.

“Of course they were,” Rubio replied. “No. 1, Fred, I absolutely believe that in this country if you are 18 years of age you should not be able to buy a rifle, and I will support a law that takes that right away.”

“Rubio was met with applause and went on to say he supports banning “bump stocks,” which can make a semiautomatic weapon fire like a machine gun. He also voiced his support for better background checks and mental health funding.”

“But when Rubio said an “assault weapons ban” would not have prevented last week’s murders, the boos rained down.”

“It is too easy to get,” Guttenburg said. “It is a weapon of war. The fact that you can’t stand with everybody in this building and say that, I’m sorry.”

Its been reported that one, and as many as three, Broward County police officers, who first responded to the active school shooter call and may have arrived while the shooting was still in progress, remained outside until the swat team arrived. The incident is under investigation so we shouldn’t speculate on what transpired. But we know that most if not all local police are routinely armed with a hand gun and possibly a tazer and some sort of pepper spray. We also know from the past dozen or more mass shootings, the perpetrators are almost always armed with high powered assault weapons, mostly AR-15’s. and buckets of high velocity ammunition.

Should we expect grossly out gunned local police first responders to charge headlong into active shooting situations with their handguns, pitted against mass murders who are armed with high velocity assault weapons, high capacity magazines, possible even armor piercing bullets and bent on killing as many people as possible? I’m sure the best body armor is no match for that kind of fire power. I’m also sure those police officers are  hoping to get home to their families at the end of their shift.

So, trained police officers are not surprisingly reluctant to confront some crazy shooter pumping out anywhere from 80 to as many as hundreds of high velocity bullets per minute (if the perp has a bump stock), traveling at 3,200 ft per second.

And trump and his son Don Jr., NRA officials and spokespersons and probably most of the cowardly Republi-cons in congress think untrained teachers and gym coaches would jump at the chance to arm themselves and take the place of highly trained swat teams. Nonsence! News Flash, teachers don’t get paid to put their lives on the line every day.

First of all, any shooter who’s planned their attack for probably months, would no doubt aim for the armed teachers first. The average shooting spree lasts from 3 to 6 minutes. So by the time any of these armed teachers were able to unlock, unholster and aim their weapon, most of their class would probably have already been mowed down.

But if trump and the NRA panderers still think its a good idea, they should arm themselves and show America how its done. trump and his sons could take the first shift.

NRA spokesperson extraordinaire Dana Loesch and NRA Florida Lobbyist for the last four decades, Marion Hammer, called the most influential gun lobbyist in the United States, would certainly volunteer for a few shifts a month, considering the financial benefits they’ve received from the NRA.

And I’m sure, “good guy with a gun,” NRA Chief Executive Officer Wayne LaPierre would certainly stand behind his unflinching gun rights advocacy of assault weapons and munitions of any kind and would be the first to volunteer to protect defenseless children.

All of these gung-ho, gun rights politicians, and assault weapon supporters should volunteer to protect children in their districts for at least a few days each month. Problem solved. But I’m guessing you probably won’t find many volunteers if any. Stand with Parkland and tell your representatives to ban these weapons of mass human carnage. These victims, students, parents and teachers won’t be silenced this time. the trump administration and legislators in the U.S. Congress and in Florida must respond with sensible gun control laws or be damned. If they won’t, vote them out in November.