Trump: ‘Ice Caps Were Going to Be Gone, But Now They’re Setting Records’ 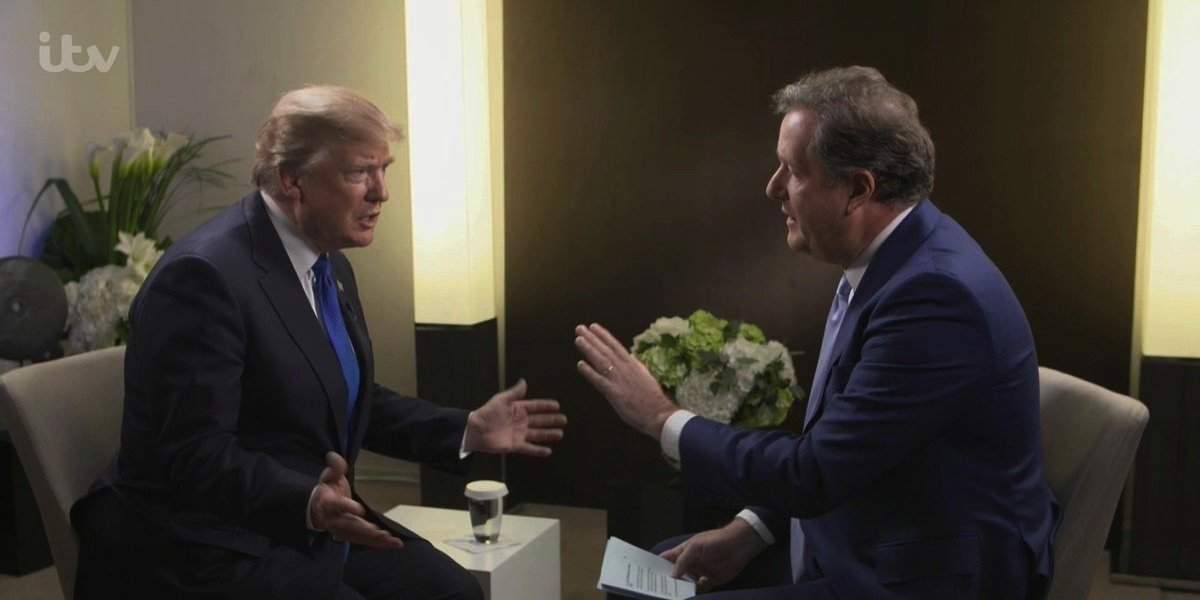 President Trump,  notorious for his views on climate change, again said something about the topic that’s the opposite of what’s actually happening.

“The ice caps were going to melt, they were going to be gone by now, but now they’re setting records,” POTUS told host Piers Morgan during an interview on UK television network ITV broadcast Sunday.

Well, the polar ice caps are indeed setting records—for melting. Here’s a GIF showing the extent of the frightening sea ice loss in the Arctic from 1979-2016.

And here’s a graph that NASA released last year showing how sea ice extent has sunk to record lows at both poles.

These line graphs plot monthly deviations and overall trends in polar sea ice from 1979 to 2017 as measured by satellites. The top line shows the Arctic; the middle shows Antarctica; and the third shows the global, combined total. The graphs depict how much the sea ice concentration moved above or below the long-term average. (They do not plot total sea ice concentration.) Arctic and global sea ice totals have moved consistently downward over 38 years. Antarctic trends are more muddled, but they do not offset the great losses in the Arctic.Joshua Stevens / NASA Earth Observatory

After the ITV interview, ten different climate scientists contacted by the Associated Press said Trump was wrong about climate change.

“Clearly President Trump is relying on alternative facts to inform his views on climate change. Ice on the ocean and on land are both disappearing rapidly, and we know why: increasing greenhouse gases from burning fossil fuels that trap more heat and melt the ice,” Rutgers University climate scientist Jennifer Francis explained.

Trump’s comment was similar to one he tweeted in 2014: “the POLAR ICE CAPS are at an all time high, the POLAR BEAR population has never been stronger. Where the hell is global warming?”

Trump is a well known climate change denier who infamously said that global warming is a “hoax” invented by the Chinese. Since taking office, he and his administration have rolled back critical environmental protections and pushed for fossil fuels.

When ITV host Morgan asked Trump if he thinks climate change is even happening, the president replied, “There is a cooling, and there’s a heating. I mean, look, it used to not be climate change, it used to be global warming. Right? That wasn’t working too well because it was getting too cold all over the place.”

Trump’s remark was consistent with the one he tweeted last month during a cold snap in the East Coast, when he confused temperature with climate. “Perhaps we could use a little bit of that good old Global Warming that our Country, but not other countries, was going to pay TRILLIONS OF DOLLARS to protect against. Bundle up!”

Morgan did not follow up by telling the president that his statements were scientifically untrue.

However, Trump did tell Morgan that he believes in “clean air. I believe in crystal-clear, beautiful water. I believe in just having good cleanliness in all.”

Also in the interview, Trump suggested he’s open to keeping the U.S. in the Paris climate agreement—even though he’s said before that landmark pact of keeping global average temperatures from rising 2°C “was a bad deal for the U.S.”

The reason being? He likes French President Emmanuel Macron, who has centered environmental action as a key presidential policy.

“The Paris accord, for us, would have been a disaster,” Trump said. “Would I go back in? Yeah, I’d go back in. I like, as you know, I like Emmanuel.”

“I would love to, but it’s got to be a good deal for the United States,” he added.

2017, wasn’t just one of the hottest years in modern history, it was also extremely costly. According to a recent report from the National Centers for Environmental Information, a division of the National Oceanic and Atmospheric Administration (NOAA), “the U.S. experienced 16 weather and climate disasters with losses exceeding $1 billion, with total costs of approximately $306 billion—a new U.S. annual record.”