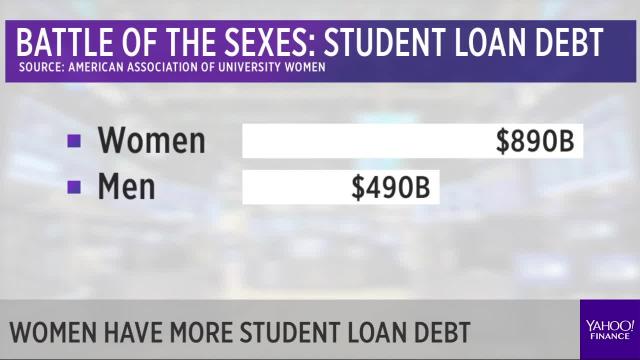 As first reported by NPR, who obtained the letter, Seth Frotman asserted that Mulvaney’s leadership led the bureau to “[abandon] the very consumers it is tasked by Congress with protecting.”

The CFPB under Mulvaney’s leadership, Frotman wrote, “has turned its back on young people and their financial futures.”

The CFPB oversees financial practices that could potentially harm consumers.

“We protect consumers from unfair, deceptive, or abusive practices and take action against companies that break the law,” the bureau’s website reads.

Frotman accused Mulvaney of using “the Bureau to serve the wishes of the most powerful financial companies in America.”

Climbing out of debt

In a recent survey by Student Loan Hero, 39 percent of millennials said too much debt is their No. 1 source of stress.

The cost of getting a degree contributes a large part to that burden. From the time that millennials were born until the time they entered college, tuition increased by nearly 129% for private colleges and by over 213% for public colleges, when adjusted for inflation.

Add that to the fact that, according to a new St. Louis Fed study, families of millennials were hit particularly hard by the Financial Crisis. (Single millennials aren’t doing much better.)

“Wealth in 2016 of the median family headed by someone born in the 1980s remained 34 percent below the level we predicted based on the experience of earlier generations at the same age,” the Federal Reserve Bank of St. Louis stated.

“Consider a typical 32-year-old family respondent in 2016 (born in 1984),” the study added. “This respondent’s family was 34 percent ($12,000) below the 32-year-old benchmark established by earlier generations.” This group is also holding more debt than any previous generations.

And because the debt that millennial families hold is not attached to “assets that have appreciated rapidly during the last few years — such as stocks and real estate — they have received no leveraged wealth boost like that enjoyed by older cohorts.” Instead, this group is dealing with debts that accumulate high interest in a seemingly never-ending cycle of repayment, such as credit card debt, auto loans, and, yes, student loans.

Frotman had served at the CFPB since the agency was started seven years ago, and he held the position of ombudsman for the last three years. There, he was in charge of the Office for Students and Young Consumers, where he reviewed complaints from student borrowers about private lenders, loan servicers, and debt collectors.

His departure comes after the relationship between the Trump administration and the CFPB has grown increasingly fraught.

Last summer, the U.S. Department of Education announced it would no longer share information regarding the oversight of federal student loans with the CFPB, claiming the bureau was “overreaching and unaccountable.”

“The Bureau’s current leadership folded to political pressure … and failed borrowers who depend on independent oversight to halt bad practices,” Frotman wrote of the decision.