At Meadowlark Organics in Wisconsin, a young couple has partnered with an experienced farmer to take stewardship of his 950-acre sustainable operation. 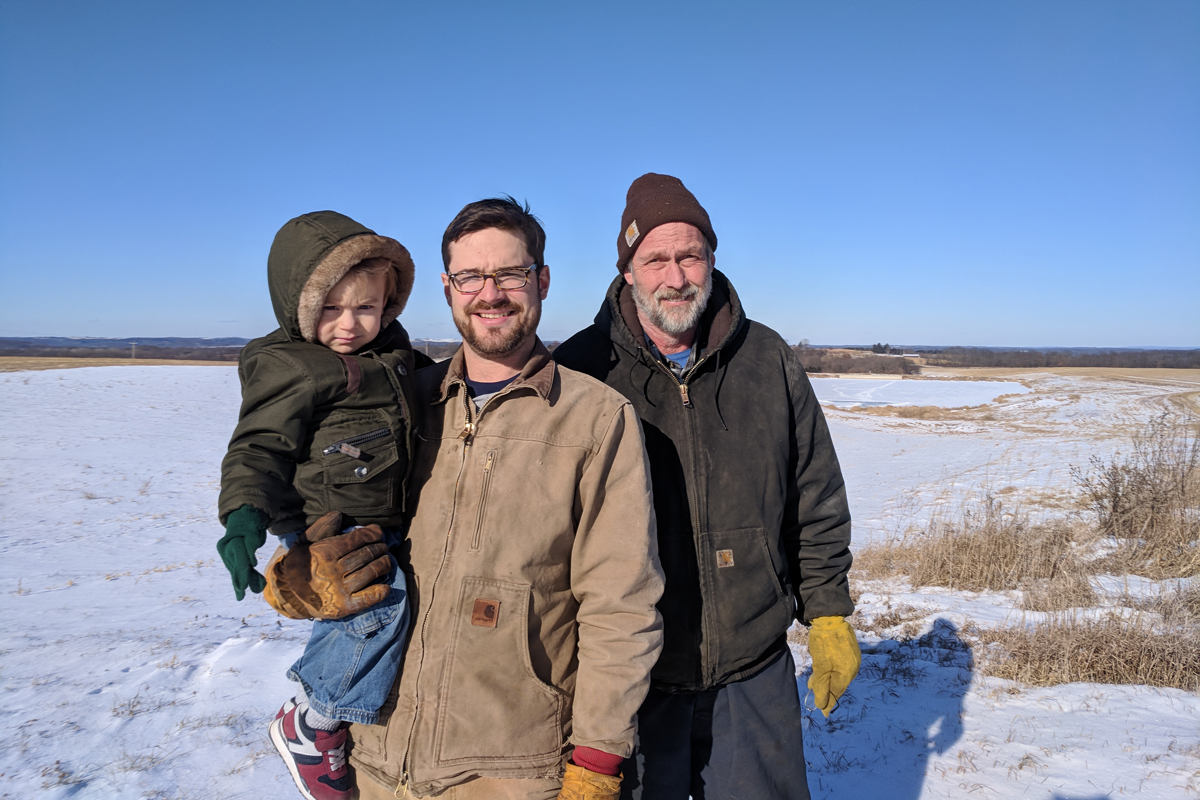 “They have the desire and motivation to lift the heavy stuff off my shoulders,” says Paul Bickford from his place at the kitchen table in a recently renovated farmhouse. Bickford is the 65-year-old owner of Bickford Organics. “It’s nice to see what I envisioned, what I built, continue,” he says.

Bickford is speaking about the 950-acre organic grain farm in the Driftless Region of Southwest Wisconsin, which he has managed and owned through several incarnations across the span of four decades. Bickford is in the process of transitioning the farm to the young couple seated across from him.

Bickford’s successors, John and Halee Wepking, hold sweat equity in the farmhouse renovations. In exchange for their work, they live here with their growing family on the farm they now co-manage with Bickford, who lives just down the road. The couple holds no familial relation to Bickford, and met him through a Craigslist ad. But, Halee says, to the nodding of heads, “We have become a family.”

Even the farm’s title is in transition, with the old-guard Bickford Organics easing out of the spotlight to make room for Meadowlark Organics, a name adopted by the Wepkings to carry the farm into the future.

Meadowlark Organics is an organic farm that specializes in growing grains: wheat, rye, polenta corn, and buckwheat. They also grow hay and recently added a small beef herd of around 20 breeding cows to the mix. With plans to continue diversifying with the addition of a granary and flour mill, Meadowlark Organics is poised to lead the Driftless region of Wisconsin into a new era of local, value-added organic grain products grown with an eye for soil conservation and land stewardship.

All this has been made possible by Bickford, who—in wanting to ensure his farm found the right heirs—allowed an enterprising couple to realize their dreams in an industry where many newcomers struggle to ever achieve viability. 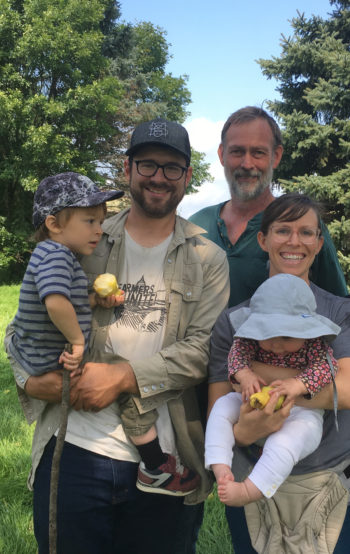 Though the Wepking’s children, a three-year-old and his baby sister, are with their grandmother on this day, a countertop collection of toy tractors suggests that the kids usually fill the kitchen with life.

“It’s my responsibility to see the operation survives because they have a family,” Bickford says. “I take that quite seriously.”

Bickford, who has carried the farm from its beginnings as a confined dairy, through its transition to rotational grazing, and on to its most recent incarnation as an organic small-grain producer, only began to think about retirement around 55.

Bickford’s children are now adults following their own paths—and though he has a son who farms with him, he would prefer to stay out of the farm’s management. So, Bickford has had to pursue a less conventional route to transitioning the farm.

Lucky for all, just the right eyes landed on the ad Bickford posted early in 2015. It read: “I am seeking a forward-thinking individual or couple to join my 950-acre organic farming operation … Ethics and trust are a cornerstone of organic farming and are important to my operation. I want to share my 40 years of farm experience with someone who is willing to work to improve my farm.”

The Wepkings met working in the kitchen at Prune in the East Village of New York City. A Wisconsin native, John had always dreamed of farming, and Halee, who is from Arizona and holds a degree in modern dance and years of professional experience in kitchens, was eager to support this dream. “I was always moving toward what felt important to me,” Halee says. “Farming, producing people’s food—that felt important.”

When the Wepkings moved back to Wisconsin, they hoped to farm on John’s family land. When that proved infeasible for reasons beyond their control, they began to look for other options.

The initial investment necessary to raise livestock alongside grains at a marketable scale limited the Wepking’s ability to start from scratch. To create the farm they envisioned, they sought an established operation managed by someone willing to build them and their vision into the farm’s future.

When the Wepkings answered Bickford’s ad, they were still wet behind the ears. But they shared Bickford’s values—they wanted to farm as land stewards using practices modeled by balanced ecosystem function. In teaming up with Bickford, they found a perfect fit.

Forging a Path Forward Together

“My first month on the job was a blur,” says John. He spent much of that first stretch alone on a tractor with three times the horsepower of anything he’d ever operated. Halee had given birth to the couple’s first child just a few weeks into the new arrangement, and through these earliest days Bickford was nearly absent—a fire had burned a building on his property, and as happens on farms, he was pulled in opposing directions.

Before joining Bickford, the Wepkings gained much of their understanding of farming practices through online research. Halee says they both gleaned as much as they could from resources such as Practical Farmers of Iowa and MOSES.

When they finally did get to work side by side, John says Bickford shared knowledge of another sort. The veteran farmer knows how fields will carry water after a rain, when to plant or weed, and what grows well where and why. In short, Bickford knows the intimate details of his land and its seasons.

Three years into their arrangement, their roles have developed definition. Halee takes the lead with the kids, manages marketing, keeps the books, and collaborates on planning decisions. Bickford is mechanically inclined: he likes his tractors and enjoys the hands-on aspects of farming. John, Bickford says, “is the boss.”

“John has very good skills at organization,” Bickford continues. He “has a grasp on the organic plans and the food that we’re going to grow.”

John soon demonstrates his ease with planning as he launches into a description their crop rotations. “When we started, it was a pretty typical Southern Wisconsin rotation of corn, soybeans, and small grain—in spring, start with small grain like oats or barley to establish alfalfa and make hay, then plow that alfalfa under for corn again,” he says. “What we’ve done is extend that into fall with planting grains.” 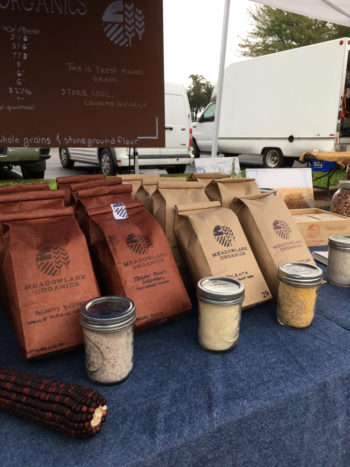 They also transitioned the spring grain mix to include spring wheat for bread flour, and last year, they started growing buckwheat. “So we’re looking at more of a six-to-seven-year rotation as opposed to four to five,” John says.

On top of these changes, with the aid of a Farm Service Agency (FSA) microloan, the Wepkings have introduced a small beef herd to the mix. The cattle allow the farmers to keep their soil nutrients in a closed loop, and the longer crop rotations allow them to, in Halee’s words, “limit tillage; manage weeds, pests, and diseases; and grow and conserve our soils.”

Bickford has always been open to adaptation, but thanks to the Wepkings, he has come to truly value diversification.

“Our current agricultural system is not going to support family farms as is, so we have to be thinking of how we diversify, where we capture value,” Halee says.

Along with the new crops, Meadowlark has expanded into value-added products such as milled flour and polenta that they sell to area co-ops, restaurants, bakeries, and consumers at markets and online. They have already invested in grain storage bins, and their long-term plans include a grain cleaning and production facility as well as a small flour mill. Ultimately their hope is to create an organic grain hub to supply the region with locally produced, consistent products on a scale that keeps pace with the burgeoning local markets.

ORIGIN Breads, an organic bakery based in nearby Madison, already bakes exclusively with grains sourced from Meadowlark Organics. When the small-scale bakery opened two years ago, owner and head baker Kirk Smock says he was faced with a decision: “Organic or local?”

With Meadowlark Organics, he and his customers get both. Meadowlark now plans their yearly production with ORIGIN Breads in mind, but allows Smock to pay for his purchases incrementally. The arrangement is somewhat unconventional, but Smocks says it is one of the many benefits to the relationships that grow through sourcing locally.

The focus on relationship-building is reflected in the farm transition. The Wepkings and Bickford have yet to work out the fine print, but they’re okay with letting the transition take shape organically. Bickford sees himself easing into full retirement within five to 10 years. In those years, the group plans to continue to evolve alongside their ideas about how best to delegate responsibilities and ownership. For now, they’re content to know they share a vision and common goals.

When asked what others might learn from their experience, Halee says, “You don’t need to have a certain salary; you need to be secure in your life. You need to have a path forward in your future. It’s about our common goal and our values. It’s about maintaining this land organically.”

Bickford chimes in, “And about feeding people healthy food.”