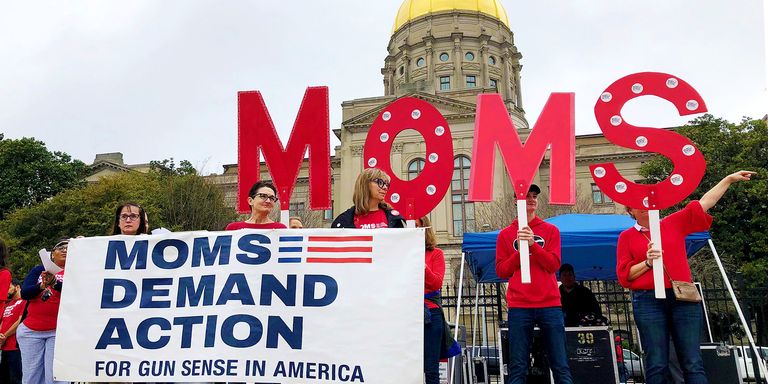 Watching the news in the days after the 2012 massacre at Sandy Hook Elementary School, stay-at-home mother and former corporate communications director Shannon Watts, like most of us, was outraged. America had a sickness, it was never more clear.

“I knew our nation was broken and I knew I had two choices: I could try to move my family of seven to another country, or I could stay and fight,” she tells Esquire.com.

Shannon Watts stayed and fought. She started Moms Demand Action for Gun Sense in America as a Facebook page, and in the five years since, MDA, as it’s known, has grown into the nation’s foremost voice on common-sense gun control, with a chapter in every state. The group is largely made up of volunteers, millions of them, “an army of mostly women but thankfully more and more dads, husbands, and brothers who are locking arms and changing laws in statehouses, changing corporate policies, and building momentum much like marriage equality activists.”

But as MDA’s reach has grown, the voice of gun manufacturers—in the form of the National Rifle Association—has gotten louder and more apocalyptic. In the weeks since the deadly Parkland shooting, the NRA has doubled down on its bellicose rhetoric. NRA executive vice president Wayne LaPierre has warned of a “socialist agenda,”and how Democrats will go after “all individual freedoms” after they topple the second amendment. Dana Loesch, the NRA’s spokeswoman, has gone after the media. “Many in legacy media love mass shootings. You guys love it,” she said last month.

To counteract the NRA’s message, Moms Demand Action turns their own weapons around on them. “The NRA has this ratings system that has become a litmus test, particularly in the areas that are red,” she says. “If you have an A rating, that matters in certain areas. What we’re trying to do is make an A rating from the NRA a scarlet letter.”

MDA and its partner, Everytown For Gun Safety, created Throw Them Out, a website where you can track how much money your representatives have taken from the NRA, register to vote, and even take steps to run for office in your own community. And as the midterms draw closer, MDA plans to expose lawmakers who have sided with the NRA.

Watts chalks up these victories to the efficacy of the clear, consistent voice of the concerned mother. “I wanted to join a grassroots army of women and moms just like Mothers Against Drunk Driving. Many advocacy groups are run by men, and they’re kind of Washington, DC, think tanks, and that’s not what I wanted to be a part of,” she says. “There’s something powerful to combating this fear fomented by gun lobbyists that your guns are going to be taken away versus mothers who are afraid their childrenare going to be taken away. I don’t think there’s any doubt about who wins.”

The secret, really, is just showing up. “That’s how it’s done. It’s the very unglamorous heavy lifting of grassroots organizing.”

The Mothers Against Drunk Driving comparison is apt, especially when we address the argument that stricter gun laws will mean that only criminals will have guns. “That’s absurd,” Watts says. “I mean, not every drunk driver is stopped by a drunk driving law, but we don’t roll them back. I think it’s very much like auto safety. We didn’t just pass seat-belt laws and drunk driving laws. We put rumble strips on the highway, we increased car technology safety by adding airbags. We did all of these things that didn’t stop every single traffic death, even now, but it’s cut them significantly. It is just like that with guns. We haven’t even tried trying.”

In the wake of Parkland, Watts sees the NRA machine revving up yet again. “We’ve seen so many straw men since Donald Trump has been elected. Each time they point their finger at something else, right? Now I think we’re at video games?” (We are.) “Anything to divert us from the real issue at hand, which is our lax gun laws.”

Since joining the fight for sensible gun policy—and bringing her voice to Twitter—she’s faced an onslaught of criticism and ad hominem attacks from gun supporters. Just this week, in fact, she drew their ire after tweeting about a New York Times op-ed by a Jewish woman who bought a gun after receiving death threats from neo-Nazis.

Shannonwatts: Interesting that the New York Times paired this op-ed by a white woman based on her anecdotes of fear and paranoia – instead of actual gun safety data – with a photo of a woman of color… https://nyti.ms/2FTVNsm  March 5, 2018

When neo-Nazi websites published my home address, I filled out the paperwork for a permit. nytimes.com

Watts has also found herself as a kind of opposing force to Loesch, the NRA spokesperson, who’s taken an even more public and aggressive stance since Parkland, pushing back hard against accusations from some individuals—including many survivors of the Parkland mass shooting—that the NRA is a terrorist organization.

So does Watts agree with this sentiment? “I guess it depends on how you define terrorist,” she says. “I think people are saying that for effect, but the NRA has put profits over people, and they know that Americans are dying every day because they stand in the way of progress. So you can call them what you want but I think that’s despicable.”

But she’s inspired by the youth of America stepping forward and taking action on this issue: “You know, I have five kids, the youngest is 17 now. He’s going to be able to vote by the midterms, and he wants to vote on this issue. Kids everywhere across the country have been raised to believe that active shooter drills are just like fire drills or earthquake drills, when in reality they’re not acts of nature, they’re man made acts of cowardice. And I think they’re starting to realize that and they’re angry.” And if they’re a little intemperate about it? All the better. “For far too long our country has addressed this issue with velvet gloves, and I think the kids are more like a velvet hammer.”

To find out what you can do about gun safety in your community, visit Throw Them Out and Moms Demand Action.

RELATED STORY
The Wisdom of the Parkland Students