The US Has Military Bases in 172 Countries. All of Them Must Close.

US bases are wreaking havoc to the health and well-being of communities across the world. 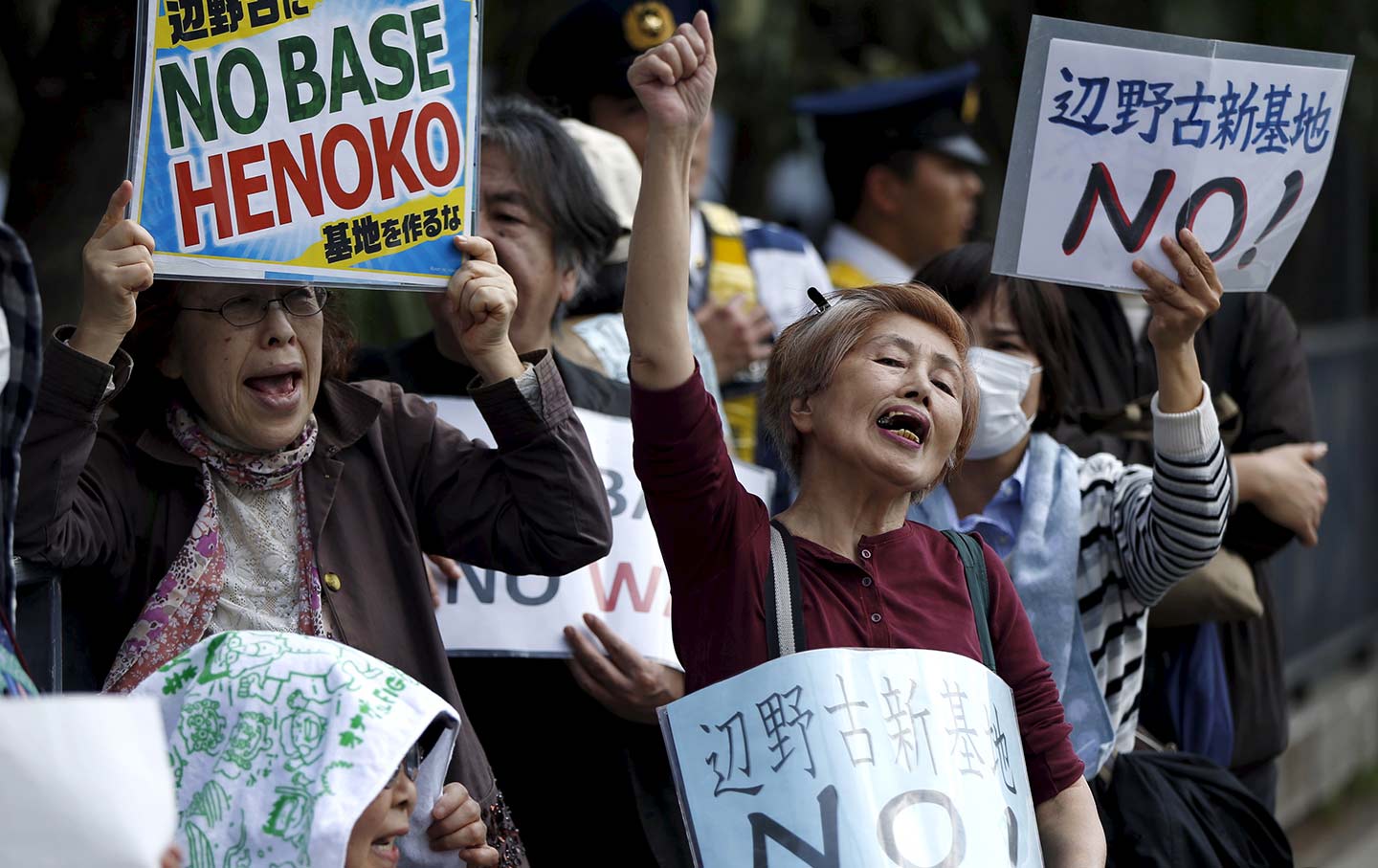 People protest the planned relocation of a US military base in Japan to Okinawa’s Henoko coast on April 17, 2015.(Reuters / Issei Kato)

On the weekend of Martin Luther King Day, Baltimore University fittingly hosted more than 200 activists in the peace, environment, and social-justice movements to launch a timely new initiative, the Coalition Against US Foreign Military Bases. Ajamu Baraka, Green Party vice-presidential candidate and co-founder of the Black Alliance for Peace, opened the meeting reminding us that Reverend King, in his historic anti-war speech more than 50 years ago at Riverside Church in New York, called the government of the United States “the greatest purveyor of violence in the world today” adding that “the war in Vietnam is but a symptom of a far deeper malady within the American spirit,” while warning that “a nation that continues year after year to spend more money on military defense than on programs of social uplift is approaching spiritual death.” Taking on the very nature of capitalism, King further insisted that

We must rapidly begin the shift from a thing-oriented society to a person-oriented society. When machines and computers, profit motives and property rights, are considered more important than people, the giant triplets of racism, extreme materialism, and militarism are incapable of being conquered.

In a series of panels over two days, conference speakers from every corner of the globe proceeded to describe the extraordinary cruelty and toxic lethality of US foreign policy despite King’s warning more than 50 years ago. We learned that the United States has approximately 800 formal military bases in 172 countries, a number that could exceed 1,000 if you count troops stationed at embassies and missions and so-called “lily-pond” bases, with some 138,000 soldiers stationed around the globe. David Vine, author of Base Nation: How U.S. Military Bases Overseas Harm America and the World, reported that only 11 other countries have bases in foreign countries, some 70 altogether. Russia has an estimated 26 to 40 in nine countries, mostly former Soviet Republics, as well as in Syria and Vietnam; the UK, France, and Turkey have four to 10 bases each; and an estimated one to three foreign bases are occupied by India, China, Japan, South Korea, Germany, Italy, and the Netherlands.

And, apart from the bases, there are other harmful US military impacts in many countries around the globe, which uproot many communities. John Lannon, of Ireland’s Shannonwatch works to end US military use of the civilian airport at Shannon, Ireland. The United States has flown more than 3 million troops and weapons through Shannon, en route to military actions despite Ireland’s decision not to join NATO and its official policy of military neutrality. James Patrick Jordan, with the Alliance for Global Justice, reported that after 9/11 the Northern Command of the US Pentagon added the training of many troops in Latin American countries in order to send them abroad to fight in US wars in other countries.

Peace and environmental activists from every region around the globe shared their experiences protesting the devastating environmental and health impacts caused by US military bases, which are wreaking havoc to health and well-being in so many communities. From Agent Orange in Vietnam, depleted uranium in Iraq, and munitions dumps and firing ranges in Vieques, Puerto Rico, to a toxic brew of poisons along the Potomac River, communities and soldiers as well as children born subsequent to exposure to these toxins are suffering a broad range of illnesses and inherited genetic damage, while the US government ducks any accountability for the harm caused by its mindless dumping and reckless burial of untreated toxic military wastes. Indeed, while some of the United States’ so-called “peer” nations, like Germany, have successfully sued for funds for clean-up of military bases after the US left them in dreadful condition, countries in Latin America, Asia, or Africa have been unable to hold the US to account, which is more evidence of the white patriarchy exercising its privilege, as we learned from Patricia Hynes, a former professor of environmental health at Boston University who won the US EPA Lifetime Achievement award and has created the Vietnam Peace Village Project to support third- and fourth-generation Agent Orange victims.

David Swanson, introducing the panel on US militarism in South America, observed:

Modern imperialism is unique to the US. US exceptionalism justifies imperial bullying and is a prominent sentiment we may have to cure. US nationalism has a religious character. Its destructive mission is imagined as sacred. Fort McHenry is not a historic site—it’s a “National Monument and Historic Shrine.” We may have to learn to value other things including the other 96 percent of humanity before the empire shuts down.

The global breadth of the participants was striking as we heard from activists in Asia, Europe, Africa, Latin America, and the Middle East, all ready and willing to expand this new network and work, not just to close down US bases, but as many expressed so eloquently, to dismantle the US empire and its patriarchal, racist, colonial policies that are causing such harm around the world. At the end of the meeting we decided to reach out and expand our coalition and took the following actions:

Most importantly, we agreed to hold a larger international conference abroad, within one year of the date of this beginning to hasten the end of the empire that subjugates people and destroys the ecosphere in order to maintain its cruel economic system. To add your voice and participate, see www.noforeignbases.org.

Alice Slater is the New York Director of the Nuclear Age Peace Foundation, and serves on the Coordinating Committee of World Beyond War.