The polar vortex — a deep mass of frigid air that rotates around the top of the world — has been knocked off balance, which means it’s liable to spill cold air into the U.S. Although winter temperatures in the lower 48 states have generally been normal or warmer than average, a blast of intensely cold air first spilled down to the Midwest and the northeastern U.S. around January 20. Now, atmospheric scientists say it’s likely to return at the end of January.For many places, that means it will be the coldest stretch of the year.

“It’s going to get really cold at the end of January and early February,” Jeff Weber, a meteorologist with the University Corporation for Atmospheric Research, an earth sciences research organization, said in an interview.

Although the arrival of chilled air is still around a week away, meteorologists widely agree that it’s safe to expect extreme cold. Cleveland will likely drop to around zero degrees Fahrenheit, New York City to the teens, and some areas like Duluth, Minnesota will plummet to negative 25 degrees, said Weber.

Why is the polar vortex coming back?

If the polar vortex is left undisturbed, it will spend the winter at home, so to speak, rotating around the Arctic.

But this formidable mass of cold air can sometimes grow weak, wobbling out of its polar home. After this happens, these weakened polar winds can can slosh into the U.S. multiple times throughout the winter.

“Once the vortex is disturbed, the areas of colder air can spill out,” noted Weber. “We expect lobes to spill out over time.”

The polar vortex first began to get wobbly in early January, after showing signs that it might split apart. These polar winds are always liable to get pushed around by fickle weather patterns, storms, or other disturbances that move around our atmosphere, Benjamin Zaitchik, an atmospheric scientist at Johns Hopkins University, said in an interview.

And sometimes, the polar vortex will get completely thrown out of whack thanks to dramatic warming events that occur some 20 miles up in the atmosphere, called sudden stratospheric warming, which splits the polar apart. This “knocks the vortex out of its cozy home,” said Weber. 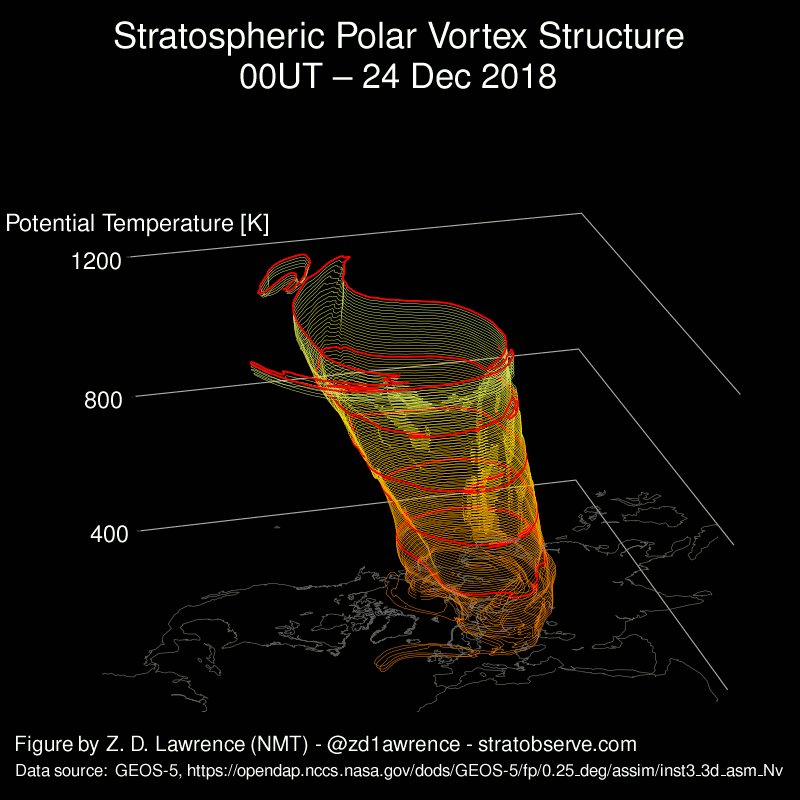 It’s “like a band of warm air just cutting right through the puddle of cold air,” John Martin, an atmospheric scientist at the University of Wisconsin-Madison, explained last week.

This creates different vortices that are liable to wobble down to different regions, like the U.S. and Europe at the same time, which happened in mid-January.

“It starts to wobble and spill cold air out to the south,” said Weber.

What exactly triggers these warming events high up in the polar vortex remains unknown. 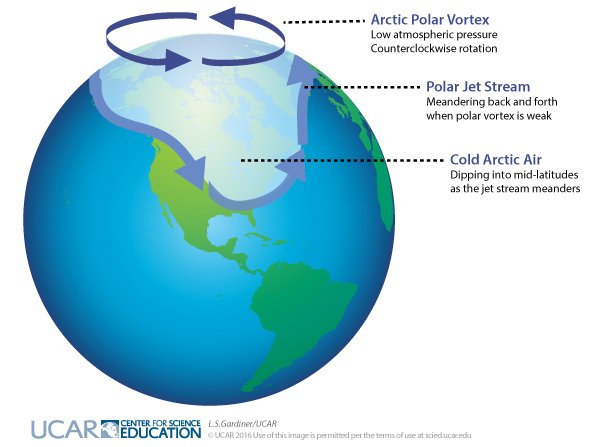 Replying to rahmstorf: A young and brilliant mathematician, Marlene Kretschmer, has spent the past years crunching decades of weather data. Using methods like cluster analysis and causal effect networks. She has just finished her PhD thesis in my department at the Potsdam Institute.

Stephen Rahmstorf: Kretschmer has found that over the last decades, the stratospheric polar vortex has become weaker and less stable, so Arctic air masses can escape more easily towards the North American and Eurasian continents. Here a schematic from UCAR.

“We are seeing these events occurring more frequently as of late,” noted Weber.

One emerging theory blames significantly diminished Arctic sea ice. The Arctic is warming over twice as fast as the rest of the globe and sea ice cover is plummeting. As a result, recent climate research suggests that — without this ice cover — more heat escapes from the oceans. Ultimately, researchers found that this relatively warmer air interacts with and weakens the winds over the Arctic, allowing frigid polar air to more easily escape to southerly places like Cleveland and New York City.

It’s important to note, however, that although the U.S. and Europe are experiencing more cold blasts from the Arctic, this doesn’t mean the planet isn’t still warming at an accelerated pace. Rather, these cold blasts are just displacing Arctic air that often stays put over the Arctic.

In 2019, it’s forecast to return during the last couple days of January.

“This will be our second blast of it,” said Weber.