The Law Is Coming, Mr. Trump

The editorial board represents the opinions of the board, its editor and the publisher. It is separate from the newsroom and the Op-Ed section. 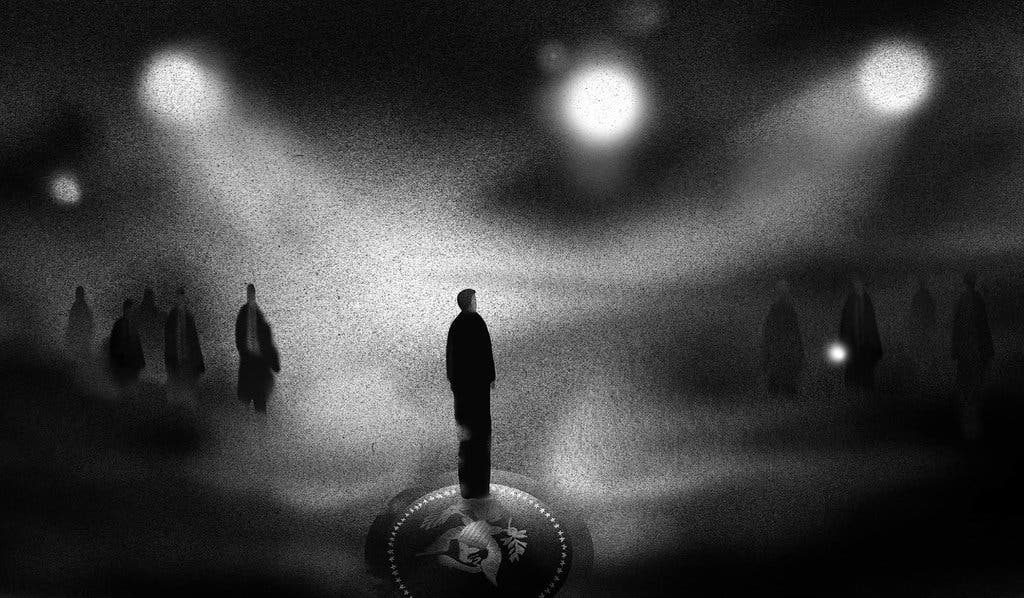 Why don’t we take a step back and contemplate what Americans, and the world, are witnessing?

That evening the president surrounded himself with the top American military officials and launched unbidden into a tirade against the top American law enforcement officials — officials of his own government — accusing them of “an attack on our country.”

Oh, also: The Times reported Monday evening that investigators were examining a $150,000 donation to the president’s personal foundation from a Ukrainian steel magnate, given during the American presidential campaign in exchange for a 20-minute video appearance.

Meanwhile, the president’s former campaign chairman is under indictment, and his former national security adviser has pleaded guilty to lying to investigators. His son-in-law and other associates are also under investigation.

This is your president, ladies and gentlemen. This is how Donald Trump does business, and these are the kinds of people he surrounds himself with.

Mr. Trump has spent his career in the company of developers and celebrities, and also of grifters, cons, sharks, goons and crooks. He cuts corners, he lies, he cheats, he brags about it, and for the most part, he’s gotten away with it, protected by threats of litigation, hush money and his own bravado. Those methods may be proving to have their limits when they are applied from the Oval Office. Though Republican leaders in Congress still keep a cowardly silence, Mr. Trump now has real reason to be afraid. A raid on a lawyer’s office doesn’t happen every day; it means that multiple government officials, and a federal judge, had reason to believe they’d find evidence of a crime there and that they didn’t trust the lawyer not to destroy that evidence.

On Monday, when he appeared with his national security team, Mr. Trump, whose motto could be, “The buck stops anywhere but here,” angrily blamed everyone he could think of for the “unfairness” of an investigation that has already consumed the first year of his presidency, yet is only now starting to heat up. He said Attorney General Jeff Sessions made “a very terrible mistake” by recusing himself from overseeing the investigation — the implication being that a more loyal attorney general would have obstructed justice and blocked the investigation. He complained about the “horrible things” that Hillary Clinton did “and all of the crimes that were committed.” He called the A-team of investigators from the office of the special counsel, Robert Mueller, “the most biased group of people.” As for Mr. Mueller himself, “we’ll see what happens,” Mr. Trump said. “Many people have said, ‘You should fire him.’”

In fact, the raids on the premises used by Mr. Trump’s lawyer, Michael Cohen, were conducted by the public corruption unit of the federal attorney’s office in Manhattan, and at the request not of the special counsel’s team, but under a search warrant that investigators in New York obtained following a referral by Mr. Mueller, who first consulted with the deputy attorney general, Rod Rosenstein. To sum up, a Republican-appointed former F.B.I. director consulted with a Republican-appointed deputy attorney general, who then authorized a referral to an F.B.I. field office not known for its anti-Trump bias. Deep state, indeed.

Mr. Trump also railed against the authorities who, he said, “broke into” Mr. Cohen’s office. “Attorney-client privilege is dead!” the president tweeted early Tuesday morning, during what was presumably his executive time. He was wrong. The privilege is one of the most sacrosanct in the American legal system, but it does not protect communications in furtherance of a crime. Anyway, one might ask, if this is all a big witch hunt and Mr. Trump has nothing illegal or untoward to hide, why does he care about the privilege in the first place?

The answer, of course, is that he has a lot to hide.

This wasn’t even the first early-morning raid of a close Trump associate. That distinction goes to Paul Manafort, Mr. Trump’s former campaign chairman and Russian oligarch-whisperer, who now faces a slate of federal charges long enough to land him in prison for the rest of his life. And what of Mr. Cohen? He’s already been cut loose by his law firm, and when the charges start rolling in, he’ll likely get the same treatment from Mr. Trump.

Among the grotesqueries that faded into the background of Mr. Trump’s carnival of misgovernment during the past 24 hours was that Monday’s meeting was ostensibly called to discuss a matter of global significance: a reported chemical weapons attack on Syrian civilians. Mr. Trump instead made it about him, with his narcissistic and self-pitying claim that the investigation represented an attack on the country “in a true sense.”

No, Mr. Trump — a true attack on America is what happened on, say, Sept. 11, 2001. Remember that one? Thousands of people lost their lives. Your response was to point out that the fall of the twin towers meant your building was now the tallest in downtown Manhattan. Of course, that also wasn’t true.