Sen. Susan Collins (R-ME) Begins To Realize The Terrible Mistake She Made 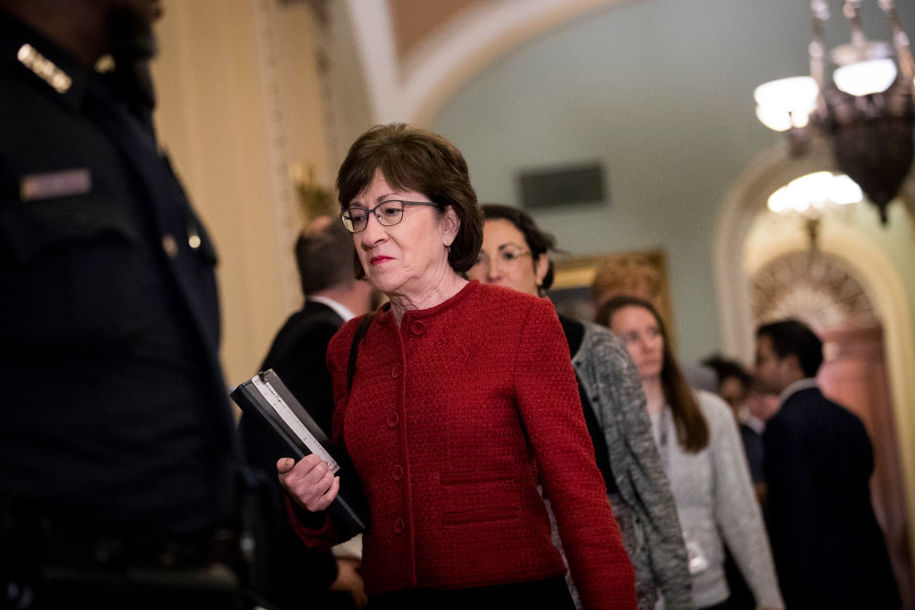 No wonder she doesn’t look happy. She screwed Mainers and herself.

You may recall Senator Susan Collins (R-ME) basking in the limelight last week during the run-up to the GOP’s vote to ram through its catastrophic tax giveaway to corporations and other Billionaires at the expense of the rest of the American public.

As one of the so-called “moderate” Republicans, her vote was solicited with tender care by Mitch McConnell, the Senate Majority Leader, who apparently promised her that the American middle class might, just might still retain some meager crumbs left over from his Party’s loot-fest of the public treasury in the form of keeping their property tax and medical expense deductions. She also obtained an “assurance” from McConnell that a 4% cut to Medicare would certainly never be included in the final Bill, once it was reconciled with the version devised by the good, caring Republicans in the House. Hey, she had it in writing!

“There’s a real fear that the tax bill is going to trigger a 4% cut in Medicare,” Collins added. “I am absolutely certain that 4% cut in Medicare that I mentioned will not occur. I have it in writing from both the Speaker of the House Paul Ryan and also Senator Mitch McConnell.”

But even these tiny, miserable morsels casually tossed to ordinary Americans were coldly eliminated and deemed too much of a sacrifice to the Super-yacht class and their proxies in the Republican Congress:

News reports this week revealed that House Speaker Paul Ryan told congressional staff after the Senate vote that he was not a party to McConnell’s promise to pass the provisions that Collins demanded.

“She made a political error that’s going to cost Mainers and cost people across the country basic lifelines while [helping] the wealthy,” said [Marie Follaytar] Smith,” [an activist and co-founder of Mainers for Accountable Leadership].

In fact it’s absolutely clear that Medicare is next on the chopping block for Ryan’s willing executioners, precisely as a result of the tax scheme Collins voted for:

As the tax cut legislation passed by the Senate early Saturday hurtles toward final approval, Republicans are preparing to use the swelling deficits made worse by the package as a rationale to pursue their long-held vision: undoing the entitlements of the New Deal and Great Society, leaving government leaner and the safety net skimpier for millions of Americans.

Now faced with a severe backlash back home, the former It-girl with well-known aspirations for the Maine Governorship is feverishly backtracking on her blunder:

Republican Sen. Susan Collins said she may change her vote on the Senate tax bill if amendments she added are not included in the final bill.

Collins believes the amendments she added in the Senate version on property tax and medical expense deduction for retirement funding improved the bill and that in time, it will lower the debt.

But as she told WMTW’s media partner, WABI, if those changes are not included in the final package, she will consider changing her vote.

That’s what tends to happen when you have nine religious leader activists getting themselves arrested occupying your office back home to protest what can most charitably be described as your utter naiveté if not outright stupidity:

It was the second group of protesters this week to be arrested in the offices of Maine’s senior senator while urging her to reject the sweeping changes to the federal tax code that are presently being negotiated in Washington, D.C. On Monday, police arrested five protesters, who had staged a sit-in at Collins’ Bangor office.

But the problem for Collins is that the GOP doesn’t need her anymore. With Mike Pence available to break any ties, and Bob Corker (R-TN) the only recorded Republican “no” vote in the Senate, they already have the votes to pass this monstrosity without her, in whatever mutated form the House disgorges back.

Instead, when Collins comes home and settles down in front of the TV with a nice cup of cocoa this holiday season, she’ll be treated to this ad sponsored by a group called Save My Care:

“Senator Collins said Republican leaders promised her they would fix things,” the narrator intones, while headlines about resistance in the House to her bills flash on the screen. “Now we know they lied to her and Mainers will suffer the consequences.”

But had she done the right thing by her constituents to begin with instead of trusting in a Party that actively recruits child molesters into its ranks, she wouldn’t be in the position she finds herself now, when it’s too late.