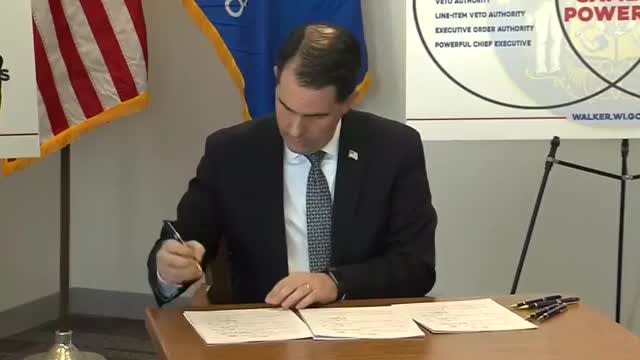 Wisconsin Gov. Scott Walker (R) signed legislation Friday that strips power away from newly elected Democrats and keeps it squarely in the hands of Republicans in the Legislature.

Voters largely rejected Wisconsin Republicans in the midterm elections. Both Walker and the GOP attorney general, Brad Schimel, lost their re-election bids. Democrats also won a majority of the votes in state legislative races, but they’ll still be in the minority because of the gerrymandered map.

During his time in office over the last eight years, Walker has steadily consolidated power in the governor’s office. The new bills weaken the offices of governor and attorney general and shift control back over to the Legislature.

Walker signed them during a press conference Friday afternoon, arguing that his Democratic successor will still be a powerful executive. He also criticized the “hype and hysteria” surrounding the debate.

There was some speculation that Walker would veto portions of the legislation, but in the end, he signed the SB 884 ― and two other bills ― into law, with no changes.

The measures will, among other things, give the Legislature control over a state economic development agency, limit early voting (which is generally known to increase voter turnout and thus help Democrats), remove responsibilities from the attorney general, and prevent the governor from withdrawing Wisconsin from a lawsuit against the federal government over the Affordable Care Act.

During his press conference, Walker said he liked early voting, but it was unfair for some areas to have longer early voting periods than others. The entire state will now be limited to two weeks of early voting.

Tony Evers, the incoming Democratic governor, would also have to get permission from lawmakers to adjust programs run jointly by the state and federal government and to ban guns from the state Capitol. The governor would no longer be allowed to renominate officials whose confirmation has been rejected by the state Senate, which is currently controlled by Republicans. Current law allows appointees to be renominated or serve in a provisional capacity.

“Today, Governor Walker chose to ignore and override the will of the people of Wisconsin,” Evers said in a statement. “This will no doubt be his legacy. The people demanded a change on November 6th, and they asked us to solve problems, not pick petty, political fights.”

Walker argued that his term didn’t end on the day of the election, and he still has the voters’ support to govern “for a full four-year term.”

When a reporter asked Walker why he waited until the last minute to implement these changes ― and didn’t hand these powers over to the Legislature earlier in his term ― he reiterated, “It’s one of those, where, our term doesn’t stop just because an election is behind held.”

Republicans have argued that the moves would simply give the Legislature more opportunity for oversight. Conveniently for Walker, their newfound desire for accountability comes just as he’s leaving office.

In Michigan, the GOP Legislature is also looking to limit the power of the state’s attorney general and secretary of state over lawsuits and campaign finance reforms. Republicans are also losing control of those two offices in the new year, after voters chose Democratic candidates in the midterm elections. Both Wisconsin and Michigan are following in the footsteps of North Carolina Republicans, who used similar tactics in 2016.

Although many Republicans have been silent on what is going on in Wisconsin, at least one influential Republican businessman in the state has condemned his party for its power grab.

“What they are planning for the Republican Party of Wisconsin will malign its integrity and lead to its downfall,” Sheldon Lubar wrote in an email to Walker, referring to the GOP leaders in the Legislature. “Worse, it will damage Wisconsin as it ignores the will of the majority of Wisconsin voters.”

“It’s a great bookend for Scott Walker’s career as governor,” said Mike Tate, who served as Wisconsin Democratic Party chairman from 2009 to 2015. “He started out divisive and misleading, trying to be like, ‘Oh, this isn’t a big deal, as I radically restructure how the state works and rig it in favor of those at the very top.’ And now, they’re doing the exact same thing and trying to make it as permanent as possible.