“Secretary of the Interior @RyanZinke will be leaving the Administration at the end of the year after having served for a period of almost two years,” Mr. Trump wrote on Twitter. “Ryan has accomplished much during his tenure and I want to thank him for his service to our Nation.” The president said he would name a replacement this coming week.

Mr. Zinke is the latest Trump official to exit an administration plagued by questions of ethical conflict. And his departure comes as Mr. Trump has begun a shake-up in his administration. In early November, the president fired Attorney General Jeff Sessions, and last weekend he announced that his chief of staff, John F. Kelly, was leaving.

In one of the final acts of Mr. Kelly’s tenure, his team told Mr. Zinke that he should leave by year’s end or risk being fired in a potentially humiliating way, two people familiar with the discussion said.

Mr. Trump has been looking at replacing a number of other cabinet officials. He has been telling associates for weeks that the commerce secretary, Wilbur Ross, will be leaving now that the midterm elections are over, and he has also frequently complained about Betsy DeVos, the education secretary. The homeland security secretary, Kirstjen Nielsen, is also seen as likely to depart soon.

But Mr. Trump is aware that the confirmation processes for any new nominees are likely to be more contentious in the second half of his term, as he faces re-election.

Mr. Zinke, a former Montana congressman and member of the Navy SEAL’s best known for riding an Irish sport horse through Washington on his first day in office, oversaw mineral extraction and conservation on roughly 500 million acres of public land. He had become the subject of several federal investigations, one of which his department’s top watchdog has referred to the Justice Department, a potential step toward a criminal investigation.

Mr. Zinke has repeatedly denied wrongdoing. “I love working for the President and am incredibly proud of all the good work we’ve accomplished together,” he said on Twitter. “However, after 30 years of public service, I cannot justify spending thousands of dollars defending myself and my family against false allegations.”

Mr. Trump had tolerated the seemingly endless drips of scandal surrounding Mr. Zinke in part because he liked him personally and in part because his focus on the cabinet was concentrated on his desire to oust Mr. Sessions.

At the same time, though, Mr. Trump disliked the bad press that was amassing for Mr. Zinke, given how it reflected on him personally. And as the incoming House Democratic majority made clear that Mr. Zinke would be a prime target, Mr. Trump’s aides convinced him that the time had come to shove out Mr. Zinke.

A few months ago, the White House Counsel’s Office indicated to some West Wing aides that officials would be less likely to be subpoenaed by the new House majority if they left before the new Congress was sworn in in January. That has helped speed up the departures of several.

“This is no kind of victory, but I’m hopeful that it is a genuine turning of the page,” said Representative Raúl M. Grijalva, who as the incoming chairman of the House Natural Resources Committee has repeatedly tangled with Mr. Zinke. He added, “The next interior secretary should respect the American people’s desire for strong environmental standards and an end to corporate favoritism.”

Mr. Zinke’s exit follows that of the other major architect of the Trump administration’s environmental policies, Scott Pruitt, the administrator of the Environmental Protection Agency. Mr. Pruitt, also known for his aggressive rollback of environmental regulations, resigned in July amid questions about alleged spending abuses, first-class travel and cozy relationships with lobbyists. Among other actions, Mr. Pruitt came under fire for reaching out to the chief executive of Chick-fil-A with the intent of helping his wife open a franchise.

Beyond examining the real estate deal, the Interior Department’s inspector general had faulted Mr. Zinke for allowing his wife, Lola, to travel in government vehicles, contrary to department policy, and chided him for using $12,000 in taxpayer money to take a charter plane after a talk to a hockey team owned by one of his biggest donors.

The inspector general has also been examining the secretary’s decision to block two Native American tribes from opening a casino in Connecticut after his office received heavy lobbying from MGM Resorts International. The entertainment giant had been planning its own casino not far from the proposed tribal one.

“There are these laws and these ethical norms that are being blown to bits by these cabinet secretaries,” Ms. Marsco said. “And that’s the pattern, the problem, that keeps us up at night.” 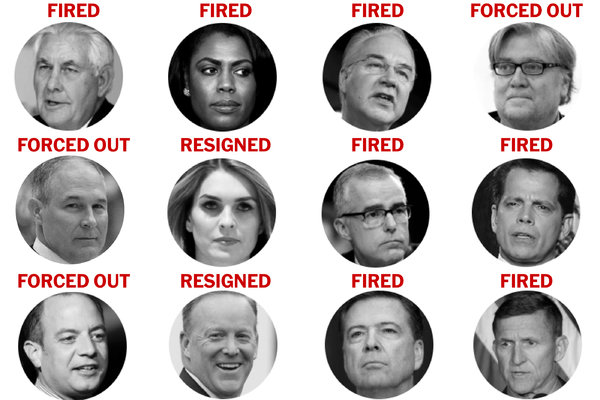 You’re Hired! You’re Fired! Yes, the Turnover at the Top of the Trump Administration Is … “Unprecedented.”

Since President Trump’s inauguration, White House staffers and cabinet officials have left in firings and resignations, one after the other.

The federal investigations follow several other examinations of Mr. Zinke’s behavior. He has been criticized for claiming on dozens of occasions that he is a geologist, though he has never held a job as one. When he was a candidate for Congress, campaign finance experts questioned whether it was legal for him to benefit from a super PAC that he had created. And as a Navy SEAL, he admitted to improperly billing the government $211 for a trip home to Montana, something that two admirals told The New York Times prevented him from rising to senior levels in the Navy.

Mr. Zinke’s resignation, rather than an end to his pro-fossil fuel policies, quite likely signals a passing of the playbook. Mr. Zinke’s deputy, David Bernhardt, a former oil lobbyist, is expected to step in as acting head of the department.

Mr. Zinke, 57, grew up in Whitefish, Mont., a timber and tourism town at the edge of Glacier National Park. When he took charge of the Interior Department, he promised that his youth in the West would help him balance conservation and extraction on the land in his care. Much of that land is in the West, and it includes the national parks and monuments that have become the nation’s environmental icons.

With his flashy leadership style and aggressive approach to deregulation, Mr. Zinke had largely escaped the public thrashing that Mr. Trump has directed at other cabinet members. But in recent weeks the president had signaled that the secretary’s tenure might be coming to end, possibly as a result of the ethics inquiries.

“I do want to study whatever is being said,” Mr. Trump said at a news conference on Nov. 7, referring to the investigations into Mr. Zinke. “I think he’s doing an excellent job, but we will take a look at that, and we’ll probably have an idea on that in about a week.”

Mr. Zinke was considered a surprise choice for the position. He had reportedly gained favor with Donald Trump Jr., because, like the president’s son, he is an avid game hunter.

He ran the office with a swaggering flair that won him the admiration of the president and conservative Westerners, many of whom applauded his effort to move major department operations to places like Denver or Boise, Idaho. But his style also drew derision from the environmental community and the quiet mockery of many career staff members in his own agency.

In Washington, he flew a special interior secretary flag above the Interior building when he was present, and he often skipped a coat and tie for fishing shirts and boots. Beyond the capital, he hiked and rode across landscapes in a cowboy hat, even as he pushed plans to drastically reduce monument boundaries.

In June, Politico reported that Mr. Lesar, the Halliburton chairman, was lending financial backing to a major development in Mr. Zinke’s hometown, Whitefish, that would significantly raise the value of property owned by Mr. Zinke. The development would include a hotel, shops and a brewery, and Mr. Zinke’s wife had pledged in writing to allow the developer to build a parking lot that would help make the project possible. The land for the potential lot is owned by a foundation created by Mr. Zinke.

Because Halliburton is the nation’s largest oil services company, and because Mr. Zinke regulates the oil industry on public land, the deal raised questions as to whether it constituted a conflict of interest. Mr. Zinke’s schedule also showed that he had hosted Mr. Lesar and a developer involved with the hotel-brewery project in his secretarial office in 2017.

In response, three Democrats sent a letter to the Interior Department’s top watchdog, Mary L. Kendall, requesting an investigation into whether Mr. Zinke had used his position as secretary for personal financial gain. In July, Ms. Kendall complied, opening an investigation. In October, her department forwarded at least one inquiry to the Justice Department.

Heather Swift, a spokeswoman for Mr. Zinke, has said that the secretary did nothing wrong and that he resigned from his charitable foundation’s board of directors before the deal was made.

Before Mr. Zinke joined the Trump administration, he often called himself a conservative conservationist. But as secretary, he quickly became one of the chief proponents of Mr. Trump’s energy-first agenda, promoting policies that seek to open the East Coast to offshore drilling, weaken the standards of the Endangered Species Act and shrink two national monuments, constituting the largest rollback of federal land protection in the nation’s history.

Last year under Mr. Zinke, the United States offered up 12.8 million acres of federally controlled oil and gas parcels for lease, triple the average offered during President Barack Obama’s second term, according to an analysis by The New York Times.

These policies won Mr. Zinke favor with Mr. Trump, who had made promotion of the fossil fuel industry a key part of his campaign platform, as well as from the oil and gas companies that had increasingly made up Mr. Zinke’s donor base as a Montana politician.

His policies have angered environmentalists, who have filed lawsuits trying to block these plans. Many have argued that Mr. Zinke has turned his back on the nation’s environmental heritage just as dire news about climate change has made land, water and air protection increasingly urgent.

The likely replacement by Mr. Bernhardt of his former boss in an acting capacity echoes events that followed the resignation of Mr. Pruitt at the E.P.A. Mr. Pruitt, once a favorite of Mr. Trump’s for many of the same reasons as Mr. Zinke, was replaced in an acting capacity by his deputy, Andrew Wheeler, a former coal lobbyist with a low profile and a deep knowledge of the agency he ran and the regulations he sought to undo.

While Mr. Zinke spent his tenure as the face of many of the Trump administration’s efforts, many on the inside saw Mr. Bernhardt as the effective manager who was able to push policies through. Mr. Bernhardt, with years of experience in the George W. Bush administration, and as a former lawyer and lobbyist for some of the nation’s largest oil companies, brings a deep insider’s knowledge to his job that Mr. Zinke lacked. His former legal clients included the Independent Petroleum Association of America and Halliburton.

Since his Senate confirmation last summer, Mr. Bernhardt has generated criticism from environmental and government watchdog groups that his new role will create a conflict of interest, as he oversees proposals that could directly benefit his former clients.