Special Counsel Robert Mueller is an “institutionalist” at a time when the institutions of our republic are crumbling, undermined by the most powerful people in our society and, in some cases, the very people who run them. This is a perilous position when democracy is sliding into autocracy, a big-money bet that relentlessly observing institutional norms is the best defense against those hell-bent on destroying them. It requires the supreme conviction of a devout acolyte of The Order of Things—the kind of person who would privately write a letter to Attorney General William Barr complaining about how he rolled out The Mueller Report, then state publicly that he has no doubt Barr conducted that rollout in good faith.

That’s what Mueller said at a press conference Wednesday—that he doesn’t think Barr conducted himself in bad faith. It was a stunning piece of counter-evidence against the claim Mueller is some kind of Honest Abe character. He might be squeaky clean, but it seems he’ll take on a smudge if it means protecting the institution of the Department of Justice—and, with it, the fading notion of the rule of law. Mueller spoke on Department property, symbolizing his commitment to Order, and largely refused throughout to speak about anything beyond the text of the Mueller Report. But there was one moment that stood out. 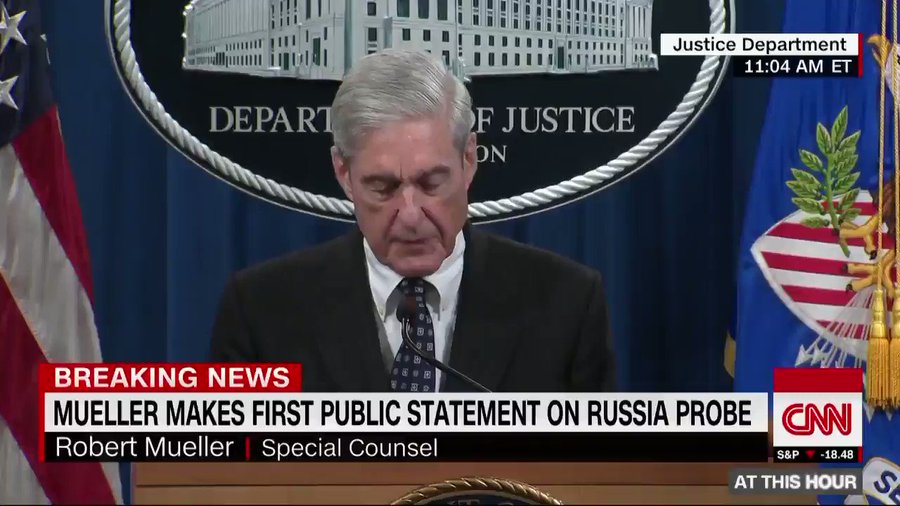 Overall, this is an extension of the Mueller Report’s appeal to Congress, which goes something like this:

2) As a result, my team could not file charges against the president.

3) We did not accuse him of a crime without charging him, because then he would have no chance to defend himself in a court of law. It would be unfair.

4) Here is evidence of up to 10 incidents in which the president meddled in the investigation, many of which could rise to the level of obstruction of justice.

5) Congress has broad powers to investigate the president and hold him accountable for unacceptable or criminal conduct in office.

6) It is up to Congress to use the vast body of evidence laid out here to hold the president accountable by initiating impeachment proceedings.

In the time since, more than 450 former federal prosecutors have signed a letter attesting to the fact that if Donald Trump were not the president, he would be charged with obstruction. Mueller could not charge him, so Congress must. It was not a Witch Hunt, the report is not a COMPLETE EXONERATION or NO COLLUSION or NO OBSTRUCTION. There was collusion, but that’s not a crime. There was evidence of conspiracy, but it did not rise to a level where the special counsel sought charges against members of Trump’s campaign. And there was a huge amount of evidence that the president obstructed justice, but Mueller felt he could not charge him according to institutional norms.

Typically, the president responded with a lie:

Donald Trump: Nothing changes from the Mueller Report. There was insufficient evidence and therefore, in our Country, a person is innocent. The case is closed! Thank you.

Remember when it was a Deep State Coup that ended with a COMPLETE EXONERATION? It never made any sense, and now he’s saying something entirely different. It is time for Congress to act.