Republicans rigged our democracy. Here’s how Democrats can fight back

Republicans have been using the constitution’s flaws to wage a one-sided war against their political opponents. It’s time for Democrats to respond 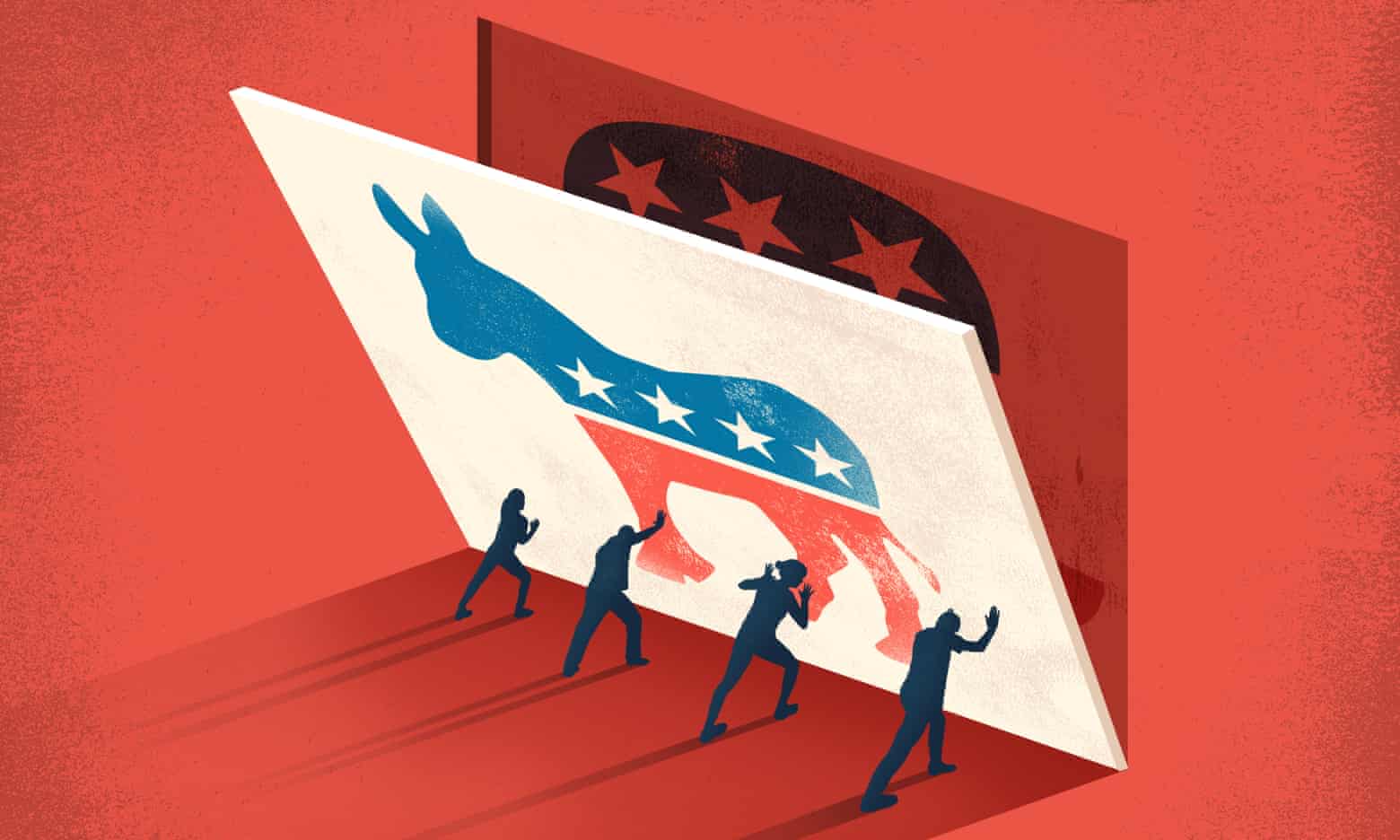 Can the Democrats lead a democratic revival? Illustration: Rob Dobi

Donald Trump wasn’t elected because Democrats lost a policy fight in 2016. What Democrats did was lose a procedural fight that has been going on since the early 1990’s, when Republicans began waging a relentless, brutal, and completely one-sided war, systematically using their lawmaking power to disadvantage their adversaries in elections and political mobilization.

Gerrymandering, the Citizens United atrocity that declared money is speech, blocking US Supreme Court nominations and obstructing legislation are some of the Republican party’s tactics. Depraved, racist voter ID laws that obviously target people who are likely to vote Democratic, and the cruel way that many states prevent current or former felons from voting, are others.

Standing in the way of reforms to our nonsensical, undemocratic electoral college system for electing the president helps the Republicans too, as does ensuring the United States remains the only country in the entire world that holds its critical national elections on a regular working Tuesday as if we literally couldn’t care less who is able take off work to cast a ballot.

Indeed, one has to grudgingly respect the single-mindedness with which the Republican party has pursued its advantage, even as we condemn the damage it has wreaked on our democracy.

Democrats, now that they are in the minority for the foreseeable future, must pay homage to their Republican overlords and use what little power they have to slow down legislation, turn the public against the Republican Congress, and then retake total power in 2018 and 2020. Then, what they must do with that power is to fundamentally alter key aspects of our political system that we take for granted but that are not, contrary to popular belief, outlined in the US constitution.

Ingenious for its time, if deeply morally deficient, the constitution saddles the country with a series of difficult political problems. Some are explicit design flaws, such as the way that every state in the United States, whether it has 38 million or 600,000 residents, gets two and only two US senators, or how the entire 435-member House of Representatives is put up for re-election every two years, the shortest election calendar in the entire world. Others are crimes of omission, like the document’s relative silence about voting rights.

But the biggest problem is that it is underspecified. It doesn’t adequately describe the powers granted to the supreme court it created, or explain what a militia is in the second amendment, or outline what happens if the Senate decides it simply can’t be bothered to carry out its constitutional obligations by approving appointments made by the president. It contains no information about how elections should be funded. And the thing is well nigh impossible to amend.

Beginning with the Gingrich radicals who took over the House in 1994, the modern Republican party has been willing to exploit the constitution’s design flaws and the constitutional order’s reliance on informal understandings between political actors to sabotage the functioning of Congress, destroy the Obama presidency, and seize vastly more power than the American people would otherwise have granted it.

When they retake power, Democrats should use those same flaws to revive not the party, but our democracy.

First, they should grant statehood to Washington DC and Puerto Rico – long-suffering territories whose citizens are utterly deprived of voting rights and representation in federal elections. This can help rectify the Democrats’ structural imbalance in the US Senate. Breaking the deep-blue state of California into seven states can finish the job, by finally creating about as many blue-leaning as red-leaning states and delivering lasting power (or at least parity) to Senate Democrats and their allies.

The theft of Merrick Garlands seat by Republicans and the deepening intensity of congressional battles over federal judicial appointments should lead the next Democratic administration to pack the supreme court, by adding liberal justices until progressives finally have their first majority in a long generation, as well as creating hundreds of new judgeships in the federal judiciary.

The constitution does not stipulate the number of justices either on the supreme court or the lower courts, and Democrats should use the threat of court-packing to press for a constitutional amendment to end lifetime tenure in the federal judiciary as well as enacting other reforms that would finally remove destructive, ugly battles over the courts from our political landscape.

Progressives should also get behind a change in how we elect our representatives to the House, enacting proportional representation reforms that would not only eliminate the grotesque chicanery of gerrymandering but also make it possible for smaller parties to finally win a seat at the governing table. And they should double the size of the House to bring the constituent-to-legislator ratio more in line with what the founders envisioned.

Finally, any serious progressive governing coalition must immediately address our litany of voting problems, from the disenfranchisement of felons to the racist voter-ID laws implemented by cynical Republicans across the country, by passing a comprehensive new voting rights act.

Step one in bringing this vision to fruition is to stop bringing pistols to the nuclear war. Democrats must be prepared to mimic their tormentors by intentionally destroying the Trump administration and then unleashing this dizzying array of electoral and institutional reforms when they recapture total power.

Only by changing the rules that are currently rigged against them, while clinging to a set of minimal behavioral standards, will Democrats ever hold power long enough to truly transform American politics in a lasting progressive direction.

Doing so will require party leaders to pursue policy changes that will be ridiculed by their opponents as outrageous affronts to democratic decency and received by their own voters with puzzlement or even shock. They need to do it anyway. The shock will wear off.

Most of these structural reforms would require only a law to be passed by a Democratic-controlled Congress and then signed by a Democratic president. If instituted as a bloc, they will improve access to the ballot; increase participation in our elections; decrease destructive tensions over the supreme court; mitigate the fundamental flaws of the Senate; bring members of the House closer to their constituents and open the world of national politics to many more citizens.

At the end of this process, Americans will despise their own politics a bit less, and feel more connected to the system. The purpose of this partisanship is nothing short of dragging the United States kicking and screaming into the 21st century.

From It’s Time To Fight Dirty. Used with permission of Melville House. Copyright © 2018 by David Faris