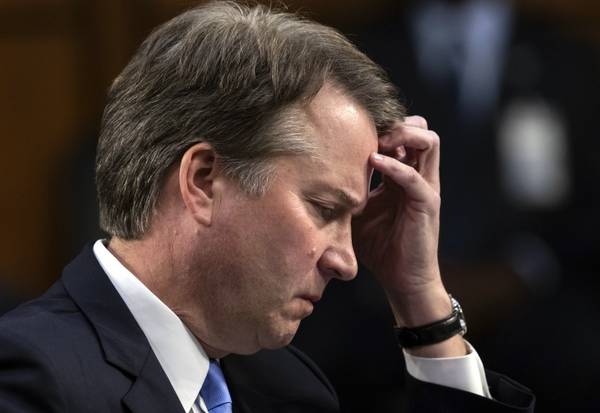 Senate Republicans strongly signaled on Wednesday that they will forge ahead with embattled Supreme Court nominee Brett M. Kavanaugh’s confirmation as his accuser called the rush for a public hearing next week unfair.

GOP senators who fretted earlier this week about the prospects for President Trump’s pick are now largely pushing for a vote on Kavanaugh, who is accused of sexually assaulting now-professor Christine Blasey Ford when they were teenagers, amid signs that she may decline to testify before the Senate Judiciary Committee. And Trump is more convinced he should stand by Kavanaugh than he was two days ago, people close to the White House say.

Trump, whom a flock of women has accused of harassment and assault, and the all-male Republican contingent on the Senate Judiciary Committee might think they have Ford cornered. The reality is that she has many options, some of which are far more dangerous to Republicans than what she has demanded, namely an FBI investigation.

Ford might choose to appear on Monday, and make a powerful opening statement accusing Republicans of running a sham investigation. Committee Chairman Charles Grassley (R-Iowa) has figured out it would be a good idea to interview her in advance of Monday’s hearings, but the staffers conducting the interview would be unlikely to have the ability or the will to follow up on investigative leads. Ford can and should refuse to give her inquisitors two bites at the apple. When she gets in front of the cameras, she should remind the country:

• This concerns attempted rape, something far more serious than the allegations raised by Anita Hill against Clarence Thomas during his 1991 confirmation hearings.

•  The FBI investigated Hill’s claims within three days (Republicans could have sent the FBI and gotten a report back by now if they hadn’t been stalling).

• Mark Judge allegedly witnessed the attack, but Republicans refuse to call him as a witness, so we can assume that they regard him as a person who would harm Kavanaugh’s defense.

• Republicans’ insistence that Ford provide even more detail is hypocritical (since they don’t want an FBI investigation) and misguided, given the large body of research concerning memories of victims of sexual assault (e.g., gaps in memory are common).

• If Kavanaugh was an excessive drinker in high school, as has been alleged, he’s in no position to testify accurately as to what he did and didn’t do.

• The unsubstantiated attacks on Ford by members such as Sen. Lindsey Graham (R-S.C.) reveal that they have predetermined the outcome of the hearing. (“She had plenty of chances to bring it up, she did not,” Graham said. “We’re not going to play this game anymore. We [want] Miss Ford to be heard but clearly to me, in August, she hired a lawyer who’s a very activist lawyer, who does not like President Trump and paid for a polygraph.”) But this is no “game,” and Ford has every right to seek counsel to fend off attacks like the very ones that Republican senators are making.

There is no need to rush to a vote in the next few days. None. Republicans have set an artificial deadline for fear that more damaging information might come out.

In short, Ford can use the hearing to put the senators, who have behaved shabbily, on defense.

Ford has another option: Hold a news conference with her own experts and make the case directly to the American people. She can sit down for an interview with a respected TV journalist. She can say whatever she wants, make certain that experts are heard and even recount the much more extensive investigative efforts undertaken when Hill stepped forward. To make her case to the American people and convince them that she is sincere, honest and credible, Ford doesn’t need the Senate.

Ford also might have the ability to go to local police to investigate if the White House refuses to activate the FBI. The Hill reports: “Can Brett Kavanaugh be investigated for an attempted rape he allegedly committed over three decades ago? In Maryland, it’s entirely possible under the law, according to some experts. Now members of the American public are calling for Maryland Attorney General Brian Frosh to open an investigation, especially if the FBI doesn’t.” That would be a process over which neither the Senate nor the Trump administration would have any control.

In short, Ford has a powerful story to tell. In trying to jam her into their abbreviated, one-sided process, Senate Republicans open the door to far more dangerous options, where the American people get to judge for themselves whether she is credible. As Kavanaugh’s approval rating slides, Republicans need to consider whether it is worth unleashing a firestorm to defend a nominee who might be a further drag on their midterm races.

In an infuriating rush to seat Kavanaugh, senators say the darnedest things