Kris Kobach Really, Really Did Not Want You To See This Deposition. Read It Here. 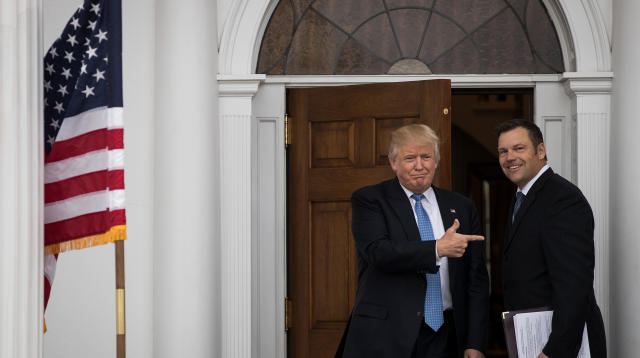 The morning after Donald Trump was elected President, Kansas Secretary of State Kris Kobach (R) wrote to an adviser on the president-elect’s transition team and told him that he had already started drafting a preliminary amendment to federal voting law. The amendment would alter the 1993 National Voter Registration Act (NVRA) to make it acceptable for states to ask people to prove they were citizens when they went to register to vote at a motor vehicle agency.

A few weeks later, Kobach traveled to Bedminster, New Jersey, to meet personally with Trump and some of his top advisers. As he was going into the meeting, Kobach was photographed holding a memo outlining a proposal for actions during the first year of Trump’s Department of Homeland Security. The 23rd item on the page, at the bottom of the memo, suggests amending NVRA to allow states to impose a proof of citizenship requirement.

As Kobach defends Kansas’ own proof of citizenship requirement, he has fought hard to block the public release of both the memo and his draft to NVRA. He has also fought having to answer questions under oath about both.

Those efforts were largely unsuccessful, as both a federal district court and the 10th Circuit Court of Appeals said he had to answer questions about them. Kobach sat for an hourlong deposition with the ACLU lawyers suing him last summer, a tape of which was played during trial in Kansas City earlier this month. A partially redacted transcript of that deposition provides a unique insight into Kobach’s conversations with Trump and efforts to change federal voting law to allow states to provide proof of citizenship.

In the deposition, Kobach says that his proposal to amend NVRA was merely a “contingency” should he lose the lawsuit against the ACLU. He said he broadly discussed the issue of noncitizens voting with Trump ― who began tweeting that illegal votes cost him the popular vote shortly after his meeting with Kobach ― but did not come up with a specific plan to impose a proof of citizenship requirement. He also said they talked about ways to incentivize states to impose a proof of citizenship requirement and that he had discussed introducing legislation to amend NVRA with Rep. Steve King (R-Iowa) should he lose the case against the ACLU.