Renewable Energy Will Be Consistently Cheaper Than Fossil Fuels By 2020, Report Claims

The cost of renewable energy is now falling so fast that it should be a consistently cheaper source of electricity generation than traditional fossil fuels within just a few years, according to a new report from the International Renewable Energy Agency (IRENA).

The organization – which has more than 150 member countries – says the cost of generating power from onshore wind has fallen by around 23%  since 2010 while the cost of solar photovoltaic (PV) electricity has fallen by 73% in that time. With further price falls expected for these and other green energy options, IRENA says all renewable energy technologies should be competitive on price with fossil fuels by 2020.

Globally, onshore wind schemes are now costing an average of $0.06 per kilowatt hour (kwh), although some schemes are coming in at $0.04 per kwh, while the cost of solar PV is down to $0.10 per kwh. In comparison, the cost of electricity generation based on fossil fuels typically falls in a range of $0.05 to $0.17 per kwh. 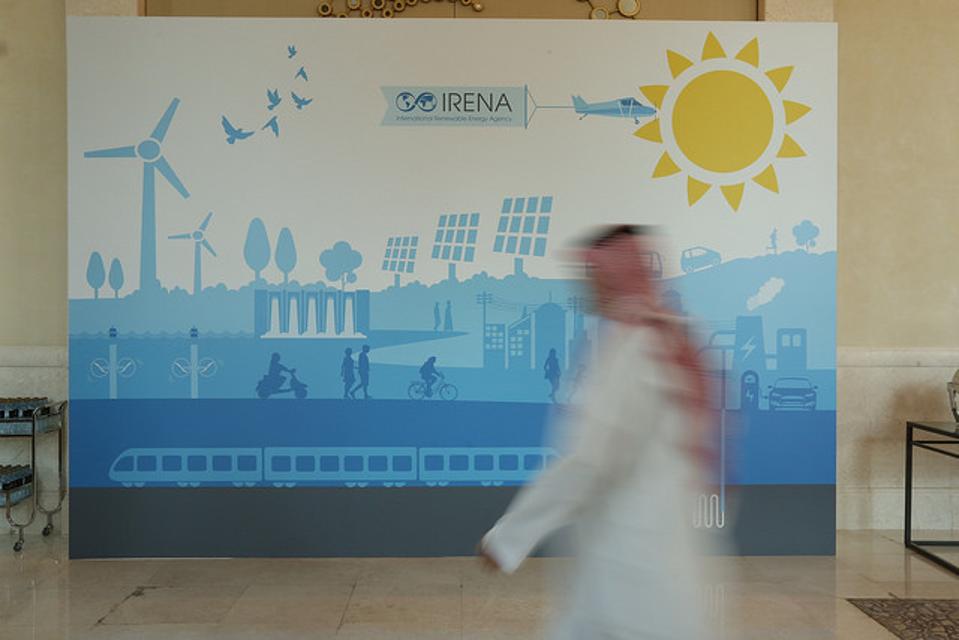 A delegate walks through the lobby at the 8th Assembly of the International Renewable Energy Agency in Abu Dhabi on January, 2018 (Photo: IRENA).

The figures are contained in IRENA’s Renewable Power Generation Costs in 2017 report, which was released on January 13, the first day of the 8th IRENA Assembly in Abu Dhabi, the capital city of the UAE.  The report predicts that solar costs will fall even further in the next few years, with a further halving of typical costs by 2020. That means onshore wind and solar PV projects could be consistently delivering electricity for as little as $0.03 per kwh within two years.

Adnan Amin, director-general of IRENA, says a significant shift is underway in the energy sector. “These cost declines across technologies are unprecedented and representative of the degree to which renewable energy is disrupting the global energy system,” he said.

The expected price falls for green energy will provide a fresh challenge to the market position of legacy fuels and to the countries that rely on them for export earnings, such as many Middle East states which have long looked to oil and gas sales as the bedrock of their economies. It also provides a challenge for some Western countries including the United States, where President Donald Trump has made a point of championing the coal industry and has taken steps to increase oil output.

If renewable energy is indeed able to undercut the cost of legacy fuels, then governments and large corporations building new power plants will almost certainly turn to green energy for any new capacity, which will reduce demand for oil, natural gas and coal.

There are several reasons for the fast-improving cost performance of the key renewable energy technologies. One is the growing preference among governments for competitive bidding processes when handing out contracts to develop new power plants, which is helping to force down the tariffs that project developers can demand. Alongside that, there is a growing base of experienced developers competing for project opportunities around the world. Thirdly, continued advances are being made in the technologies themselves.

While onshore wind and PV solar are leading the way, other sister technologies are also becoming more competitive. IRENA estimates that offshore wind and concentrating solar power should cost in a range of $0.06-$0.10 per kwh by 2020-22.

And although solar and wind power are the main drivers of a shift to renewable energy, other green energy sources are also becoming more competitive. The report points to bio-energy, geothermal and hydropower which, it says, have all been able to compete directly on cost with fossil fuels in some cases over the past year.

The falls in costs is leading to some big investments. IRENA says that since 2013 more than $1 trillion has been invested in renewable energy around the world and the industry now provides nearly 10 million jobs.

“Turning to renewables for new power generation is not simply an environmentally conscious decision, it is now – overwhelmingly – a smart economic one,” said Amin. “We expect the transition to gather further momentum around the world in 2018.” 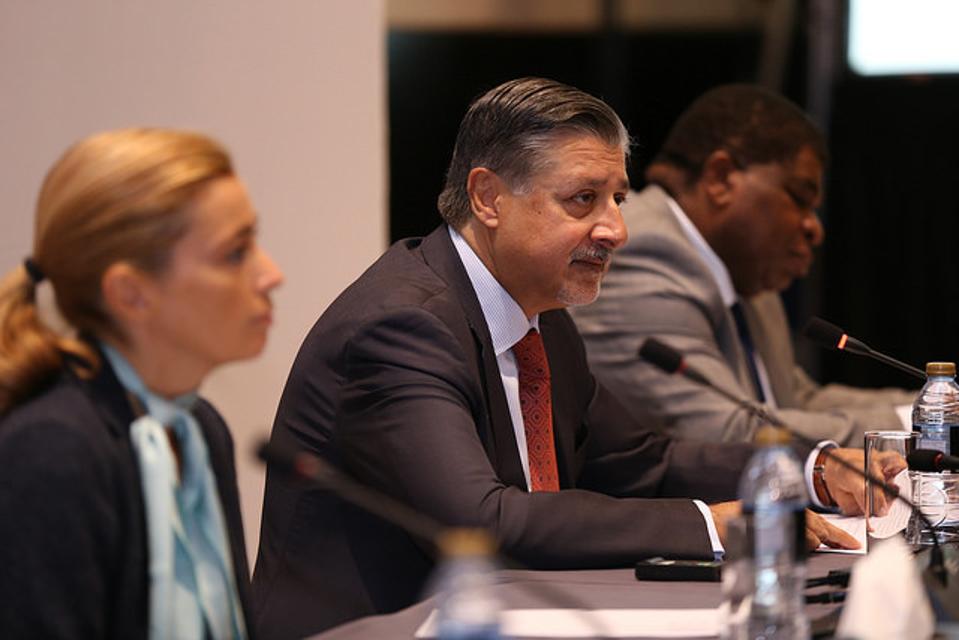 Dominic Dudley is a freelance journalist with almost two decades’ experience in reporting on business, economic and political stories in the Middle East, Africa, Asia and Europe.

Denmark Breaks Own Record for Electricity Generated via Wind Power

Denmark recently set a new record in wind power generation, harvesting 43.4 percent of its electricity from the resource in 2017 — beating its previous best from 2016. The country’s government is hoping to use the momentum to encourage other countries to get on board.

“The price of wind energy is moving in one direction only, and that’s a steep downward trajectory,” commented Denmark’s energy minister Lars Chr. Lilleholt, according to a report from Bloomberg.

Denmark has been leading the push toward wind power for some time. In March 2017, the country successfully sourced all its electricity from wind power for 24 hours. The achievement showed that the country’s goal of ending its reliance on coal by 2030 is attainable.

While Denmark’s decision to pursue renewable resources is part of a larger global effort to phase out fossil fuels, the country does have something of a vested interest. The world’s biggest turbine maker, Vestas Wind Systems A/S, is Danish. Furthermore, its government holds a controlling stake in Orsted A/S, which remains the biggest operator of offshore wind farms internationally.

Denmark still subsidizes wind power projects, as it has done since the 1970s. However, Lilleholt is confident that this will not be necessary for much longer.

Wind power is proving to be a compelling option for nations who wish to implement renewable forms of energy on a large scale. It was recently announced that Britain managed to generate twice as much energy from wind as from coal in 2017, and Germany is now home to the world’s largest individual turbine.

Certain areas of the United States are making strides forward, like the record-breaking results reported in California and the enormous Amazon-backed wind farm set to be constructed in Texas. The future of those plans remains to be seen, however, as calls to discontinue tax credits promoting its usage would seem to be a step in the opposite direction.

Fossil fuels blown away by wind in cost terms: study 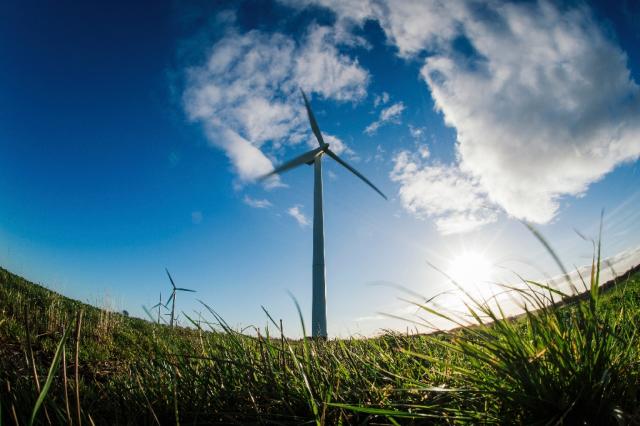 There is a bright future for wind and solar power as they are rapidly becoming cheaper than fossil fuel electricity plants, according to a new study. (AFP Photo/Johnathan Nackstrand)

According to a new cost analysis from the International Renewable Energy Agency (IRENA), within two years “all the renewable power generation technologies that are now in commercial use are expected to fall within the fossil fuel-fired cost range, with most at the lower end or undercutting fossil fuels”.

It expects renewables will cost between three and 10 US cents per kilowatt hour (kWh) by 2020, while the current cost spectrum for fossil fuel power generation ranges from five to 17 US cents per kwh.

“This new dynamic signals a significant shift in the energy paradigm,” said IRENA’s Director-General, Adnan Amin, in a statement.

“Turning to renewables for new power generation is not simply an environmentally conscious decision, it is now — overwhelmingly — a smart economic one,” he added.

Continued technological advancements are not the only factor helping drive down prices. The report found that the market was becoming more competitive and a number of experienced project developers had emerged in the sector.

The best onshore wind and solar PV projects are expected to deliver electricity for three US cents or less by next year.

But onshore wind and solar are not the only sectors becoming more competitive rapidly. The study found that new bio-energy and geothermal projects commissioned in 2017 had global weighted average costs of around seven US cents per kwh.

IRENA said auction results suggest that two other technologies –concentrating solar power (CSP) and offshore wind — will provide electricity for between 6-10 US cents per kwh by 2020.

“These cost declines across technologies are unprecedented and representative of the degree to which renewable energy is disrupting the global energy system,” said Amin.

The report was released on the first day of the eighth assembly of IRENA, which aims to be a global hub for renewable energy cooperation and information exchange by its 154 member countries.