Fears of another Chernobyl-like disaster in Ukraine have prompted warnings in Norway for citizens to “dust off” Cold War bunkers.

Since invading Ukraine last month, Russian troops have occupied Europe’s largest nuclear power plant at Zaporizhzhia as well as at the now defunct plant at Chernobyl, the scene of the world’s worst nuclear accident in 1986.

Odd Roger Enoksen, Norway’s defence minister, has now aired concerns that any accident at a Ukrainian power plant that cause a radiation leak could impact his own country if the wind travels in its direction.

According to The Times, defence sources have told civilians in Norway to start “dusting off” their bunkers at home “in case of nuclear alert”.

The source told the paper: “Everyone has been warned so if they are using them for storage now they need to make a plan for taking things out.”

A 72-hour warning would be given in advance to get bunkers ready for use.

Enoksen calmed fears that the warning was due to the threat of a nuclear war, rather than fallout from an accident.

He said: “Ukraine has the most production of nuclear power in Europe and if an accident happens, as with Chernobyl, we will all in western Europe be affected by that if the wind goes in this direction.” 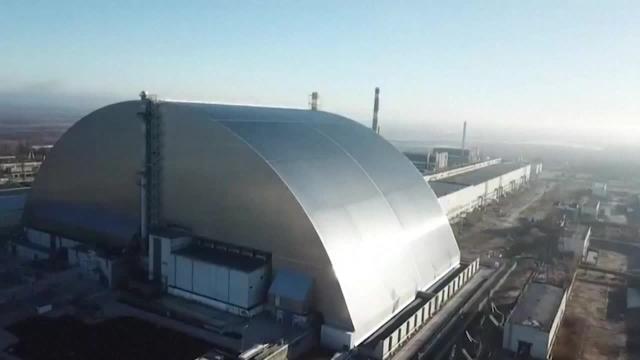 Ukraine has warned that radiation could be released from Chernobyl. The nuclear power plant, which is currently under the control of Russian troops, has been knocked off the power grid and cannot cool spent nuclear fuel.

He said Norway was still able to see the effects of Chernobyl adding: “In summer time we can actually see ashes from burning grass in Ukraine.”

The warning comes as US defense officials said Russian forces may have begun to pull out of Chernobyl.

According to the AFP news agency, US defense officials said troops had begun walking away from Chernobyl and moving to Belarus. “We think that they are leaving. I can’t tell you that they’re all gone,” they said.

Norway, which shares a 12-mile land border with Russia, made it compulsory for bunkers to be built in civilian infrastructure like hotels during the Cold War-era.

Norwegians have also been told to stock up on medicines for children in case of radioactive fallout.

The warnings come as the head of Ukraine’s state nuclear company urged the UN nuclear watchdog to help ensure Russian nuclear officials do not interfere in the operation of nuclear power plants occupied by Russian forces.

Energoatom CEO Petro Kotin said earlier this month that Russia’s state nuclear company Rosatom had sent officials to the Zaporizhzhia plant to try to take control of it.

Representatives from the International Atomic Energy Agency (IAEA) arrived in Ukraine on Tuesday to inspect the country’s nuclear facilities after Kyiv claimed that munitions stored near Chernobyl could explode.

IAEA chief Rafael Grosso, along with various experts and equipment aimed at keeping nuclear facilities there safe, are on hand for assistance.

Since Russia’s invasion, Grossi has called on both countries to urgently agree a framework to ensure nuclear facilities are safe and secure.

Ukraine has repeatedly expressed safety concerns about Chernobyl and demanded Russian forces occupying the plant pull out of the area.

The Russian military said after capturing the plant that radiation was within normal levels and their actions prevented possible “nuclear provocations” by Ukrainian nationalists.

Russia has denied that its forces have put nuclear facilities inside Ukraine at risk.