North Korean Defector had 10-Inch Parasite in His Stomach, Unlike Anything Surgeon Had Seen Before

An experienced South Korean surgeon operating on a defector from North Korea has described his shock upon finding dozens of unusual parasites inside the man’s stomach, suggesting widespread health issues among the population of the secretive state.

The patient, who has not been named, was critically injured as he fled North Korea under a hail of bullets fired from his former comrades through the Joint Security Area (JSA) at the demilitarized zone (DMZ) border area between the two countries on Monday. Doctor Lee Guk-jong has now operated twice on the man to treat his injuries, with the presence of parasites adding complications to the surgery.

“We are struggling with treatment as we found a large number of parasites in the soldier’s stomach, invading and eating into the wounded areas,” Lee said at a press briefing following a three-and-a-half-hour operation on Wednesday, quoted in the Korea Biomedical Review.

The doctor described the patient as been 5 feet 5 inches tall and weighing 132 pounds, suggesting he may suffer from malnutrition.

Among the parasites was a species of roundworm that can be contracted by eating vegetables fertilized with human feces or, more generally, in areas with poor sanitation. The longest parasite found in the North Korean soldiers’ stomach measured 27 centimeters (10 inches), local media reported. Experts say that many North Koreans could be infected with the same kind of parasites.

“I have been doing surgery for more than 20 years, but I have not seen such parasites. I will not be able to find them in [South] Korea,” said Lee, who is a respected trauma specialist in the country. He previously successfully treated the captain of the South Korean chemical freighter Samho Jewelry who was shot six times when his vessel was seized by Somali pirates in 2011. 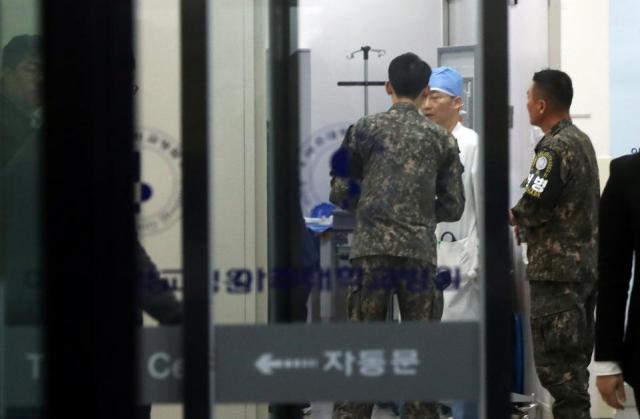 The abdomen wounds were only some of the injuries suffered by the North Korean soldier, who was also hit on his elbow, shoulder and chest area and has not yet fully regained consciousness. According to Lee, it was only thanks to the U.S. air medics applying first aid treatment while he was being airlifted on a Black Hawk helicopter that the man is still alive.

The technique used to evacuate the soldier from the JSA to the specialized trauma center at the Ajou University Hospital south of Seoul, is known as MEDEVAC or “Dust Off,” an acronym for “Dedicated Unhesitating Service To Our Fighting Forces.” First devised to rescue soldiers in Vietnam in 1962, U.S. forces still regularly practice these air casualty evacuations.

The North Korean defector’s identity has not yet been publicly disclosed. The South Korean intelligence agency identified him as a man in his 20s holding the rank of staff sergeant, according to lawmaker Kim Byung-kee, who attended a closed-door briefing, quoted in the Korea Herald.

The United Nations Command, which supervises the implementation of the 1953 Korean War armistice along the 151-mile long DMZ, agreed to release CCTV footage of the soldier’s escape, which was described as “movie-like” by some lawmakers who were briefed on the incident on Tuesday.

But officials from the South Korean Ministry of Defense blocked release of the 26-second clip on Thursday, citing concerns that the video would spark speculation over the South Korean troops’ handling of the event. The officials suggested releasing a longer video, news agency Yonhap reported.

Reports of the incident suggest that North Korean soldiers, who were chasing after the defector, fired at him even after he crossed the border line into South Korea. Firing towards the South Korean side of the border would be violating one of the terms of the armistice, sparking a debate in South Korea over the rules of engagement in the region.