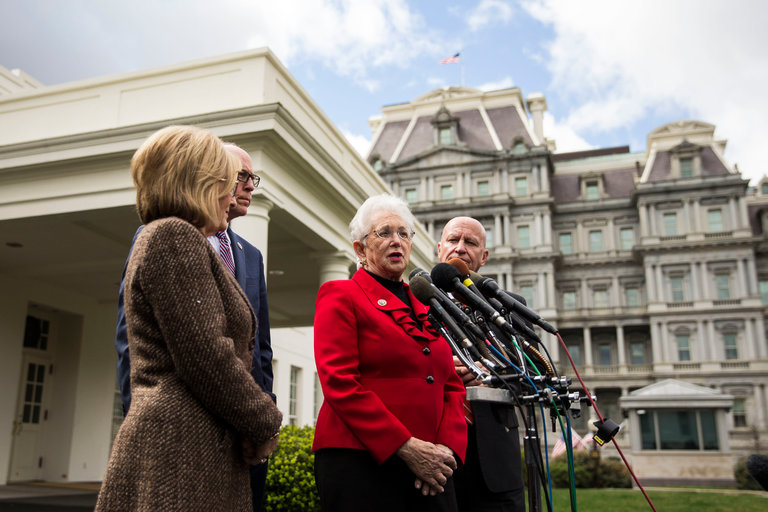 Representative Virginia Foxx, Republican of North Carolina and the chairwoman of the House Committee on Education and the Workforce, in March outside the White House. CreditAl Drago/The New York Times

WASHINGTON — Congressional Republicans began work Tuesday on an extensive rewrite of the law that governs the nation’s system of higher education, seeking to dismantle landmark Obama administration regulations designed to protect students from predatory for-profit colleges and to repay the loans of those who earned worthless degrees from scam universities.

But in its systematic effort to erase President Barack Obama’s fingerprints from higher education, the measure before the House Committee on Education and the Workforce could undermine bedrock elements that have guided university education for decades. One provision could do away with the system of “credit hours” that college students earn to complete their degrees, which could help for-profit colleges inflate the value of their degrees.

The bill “addresses many of the ill-conceived mandates handed down by the Obama administration in favor of policies that will allow higher education to meet the current needs of students,” said Representative Virginia Foxx of North Carolina, the committee chairwoman and the chief author of the Promoting Real Opportunity, Success and Prosperity Through Education Reform (PROSPER) Act.

Many elements of the bill pursue bipartisan goals: simplifying the federal financial aid process, cutting down on student debt and expanding programs like federal work-study programs.

But the bill’s efforts to roll back the Obama legacy will divide Congress and the education community along partisan lines — and bolster efforts already underway by Education Secretary Betsy DeVos to boost the fortunes of for-profit colleges and universities. Two of the Obama-era regulations of for-profit colleges and universities — called “gainful employment” and “borrower defense” — are being rewritten by Ms. DeVos’s Education Department. Under the House bill, they would be repealed and blocked from readoption.

A lesser-known, more complex “credit hour” rule also completed by the Obama administration would suffer the same fate. Policy experts say the undermining of university credits would be among the most consequential provisions in the 542-page bill, illustrating how in their haste to erase Obama’s regulatory legacy, Republicans could disrupt a higher education system that is considered the best in the world.

“The credit hour is the bedrock of the entire higher education system, so it could be catastrophic,” said Amy Laitinen, a former Obama administration staff member and the director of higher education at New America, a research group. “This could do things we can’t even imagine yet — like open up the door to a whole new breed of for-profit institution, without any safeguards.”

The coveted “credit” has become the standard measure for virtually every element of higher education, from schedules to degree requirements to financial aid qualifications. In 2011, the Obama administration issued rules that set minimum requirements for awarding college credits after finding that lax oversight allowed for-profit institutions to inflate credit hours for each class, speeding up degrees and bringing in more financial aid dollars guaranteed by federal taxpayers.

A 2010 Education Department inspector general’s investigation found that one for-profit school awarded nine credits for a 10-week course, significantly more than the traditional program’s average of three credits for a 15-week course.

Under the Obama-era rules, colleges can choose from a menu of options to define a credit hour, including hours of instruction, evidence of student achievement or amount of work represented in outcomes. The Obama Education Department maintained that the definition still gave institutions plenty of room to run higher education institutions.

Still, several college and university groups opposed the rules for being intrusive and burdensome.

The American Council on Education wrote a letter to Arne Duncan, the former education secretary, on behalf of 70 institutions that opposed the definition. The council said that the inspector general’s findings should not spur a one-size-fits-all definition, and the department had “federalized a basic academic concept and, at the same time, developed a complex, ambiguous and unworkable definition.”

“The creation of a federal definition of a credit hour was part of the Obama administration’s ‘Washington knows best’ approach to higher education, and it only created barriers to innovation for students and institutions,” she said.

But where Republicans see deregulation, others see potential chaos.

Committee Democrats called the bill a “war on students.” House Democrats said Republicans refused for months to engage in talks about reauthorizing the bill, which they characterized as a giveaway to the for-profit industry.

In addition to the gainful employment, borrower defense, and the credit-hour rules, the bill calls for repealing a requirement that for-profit institutions get at least 10 percent of their revenue from nonfinancial-aid sources.

That rule was issued because some for-profit colleges were signing up students who did not have the means or ability to complete a degree or find gainful employment. They would then secure the students loans guaranteed by the federal government, knowing that the inevitable default would be covered by taxpayers. The legislation also weakens rules that required states to take a bigger role in authorizing institutions of higher education

During Tuesday’s drafting session, Democrats offered amendments that would have restored some of the accountability measures, but all were defeated.

But Representative Paul Mitchell, Republican of Michigan, said Democratic attempts to restore the rules unfairly targeted the for-profit sector and represented a “false dichotomy that continues to devalue career and technical education which is wrong in this economy.”

Ms. Laitinen for years has advocated “cracking the credit hour,” after finding that it was never intended to be used as a measure of learning, as colleges use credits now. The credit hour was originally a narrow gauge of how much time professors needed to spend in class to qualify for pensions.

Andrew Carnegie first established the modern-day credit hour in the early 1900s, allowing colleges to participate in a free pension system if they adopted the use of a “standard unit,” also known as a “Carnegie unit,” for college admissions. Faculty members who taught 12 credit units qualified for pensions, and 120 credits came to equal a bachelor’s degree.

Ms. Laitinen is among those who believe that the credit hour has become a faulty proxy for what a student knows, when really it only measures how much time they spent in a seat.

But throwing out the credit system without a replacement would reopen the system to hucksters preying on students and bilking the federal loan guarantee, she said.

“In no way are we prepared to just throw out the credit hour,” Ms. Laitinen said. “It’s hard for me to see a world where we don’t see massive fraud and abuse if this bill were passed.”

Ms. Foxx said that higher education accrediting agencies would be a line of defense for regulating colleges and universities. Her aides said that the bill contains several accountability measures, including the creation of a “data dashboard” that would provide students with information like average salaries and the debt levels of graduates from college programs. One provision would revoke federal funding for institutions that have high percentages of borrowers who are at least 90 days delinquent on loan payments.

After the credit rule began, nontraditional higher education institutions took advantage of it to be more creative in how they deliver education, for instance, offering more self-paced degree programs, online classes and experience-based assessments of learning. The number of so-called competency-based education programs, which award credits based on demonstrated mastery versus how long students spend in class, rose from 20 the year the rule went into effect to 500 in 2015, according to a New America estimate.

Paul J. LeBlanc, the president of Southern New Hampshire University, said he fears that programs like his would suffer without accountability. Mr. Obama praised his private, nonprofit college for its flexibility and affordability. The university has a program that allows students to earn a business degree in three years without attending summer classes, and another program that emphasizes career readiness through projects and real-world experiences instead of class time.

Mr. LeBlanc said the Republican higher education bill may open up opportunities for more innovation, but, he said, “It doesn’t answer the question: How do we know?”