A bipartisan Senate deal that would extend critical ObamaCare payments to insurers for two years got the cold shoulder from Republicans on Tuesday, suggesting it faces a rocky path to become law.

The chairman of the conservative Republican Study Committee in the House dismissed the offering from Sens. Lamar Alexander (R-Tenn.) and Patty Murray (D-Wash.) as an affront to GOP promises to repeal President Obama’s signature legislation.

“Anything propping [ObamaCare] up is only saving what Republicans promised to dismantle,” said Rep. Mark Walker (R-N.C.), who leads a group of more than 150 conservatives.

Senate Majority Leader Mitch McConnell (R-Ky.) stopped short of promising to bring the bill to the floor, and while Sens. John McCain (R-Ariz.) and Susan Collins (R-Maine) offered some praise, not a single Senate GOP conservative offered strong public support for the compromise.

Senate Democrats, in contrast, hailed the deal, and pressed GOP leaders to quickly bring it to the floor.

They also touted “anti-sabotage” measures they said they had included in the deal that would prevent President Trump from taking ObamaCare apart — language that appeared aimed more at winning a messaging war over the health-care law than actually advancing a legislative compromise.

“The president had been sabotaging [ObamaCare] and the agreement would undo much of that sabotage,” said Senate Democratic Leader Charles Schumer (N.Y.). “So overall we are very pleased with this agreement.”

While Speaker Paul Ryan (R-Wis.) did not release a statement on the deal, Minority Leader Nancy Pelosi (D-Calif.) did, hailing it as “good news for families across America.” 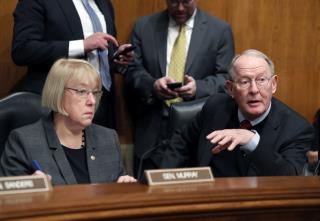 The deal forged by Alexander and Murray, who have been working on and off on legislation for months, would fund payments to insurers meant to help poorer people afford healthcare.

President Trump announced the end of the payments just last week, arguing the previous administration never had the authority to make them given Congress’s control over the nation’s purse strings.

Trump offered measured support for the compromise when he was asked about it during a press conference Tuesday with Greece’s prime minister, calling it “a short-term solution so that we don’t have this very dangerous little period.”

But Trump’s endorsement was hardly ringing, and it did not appear that Republicans were highly excited about the measure.

Rep. Mark Meadows (R-N.C.), the chairman of the conservative House Freedom Caucus, said there were elements of the Alexander-Murray compromise that could be built upon, but that “much more work needs to be done.”

He mentioned including lower-cost, short-term health insurance plans and expanding health savings accounts as elements that could be added to the deal.

The basics of the deal worked out by the two senators — who are the chairman and ranking member on the Senate Health Committee — would exchange the payments to insurers for increased flexibility for states to change ObamaCare regulations. It would allow states to change rules that insurers must meet under the health-care law as long as consumers are still offered “comparable” affordability.

The measure would also allow people to buy lower-cost, less generous “copper” insurance plans. And it would speed up the process for states to apply for a waiver for ObamaCare rules, for example by letting a governor apply without waiting for the approval of the state legislature.

It would not change the minimum standards that an insurance plan must meet, and would restore $106 million in funding, cut recently by Trump, for outreach to sign people up for ObamaCare. A GOP aide said the money would go to state governments, rather than be spent through the Trump administration.

Alexander acknowledged the legislation faces a tough road, but pointed to the support from Trump as promising.

“I’m encouraged by the consensus of support I’ve received, and that includes President Trump,” Alexander said. “He’s called me twice over the last two weeks saying he doesn’t want people to be hurt in the interim.”

He also pitched his plan as just an interim step.

“This takes care of the next two years. After that we can have a full-fledged debate on where we go long term on health care,” Alexander said. “This is a small step. I would like to undersell it, not oversell it.”

Even with Trump’s support, the bill seems like a long-shot in the House. Just last month, Ryan told the Senate that an Alexander-Murray deal is “not viable” for the House GOP.

The way forward might be to attach the health-care legislation to another bill — such as the legislation needed to keep the government open at the end of the year. That vehicle is also seen as a target for immigration measures — including legislation that might shelter young immigrants known as “Dreamers” from deportation.

At the same time, that sets up a complicated negotiation at the end of the year that could involve trade-offs on high-profile issues that would raise risks for both political parties.

Alexander said he would be working to attract Republican co-sponsors for the measure this week.

“Hopefully we will be giving Sen. McConnell and Sen. Schumer legislation co-sponsored by a significant number of Republicans and Democrats later this week, and then we can see where it goes from there,” he said.