My Great-Grandparents Weren’t ‘Illegal’ When They Came To The U.S. They Would Be Now. 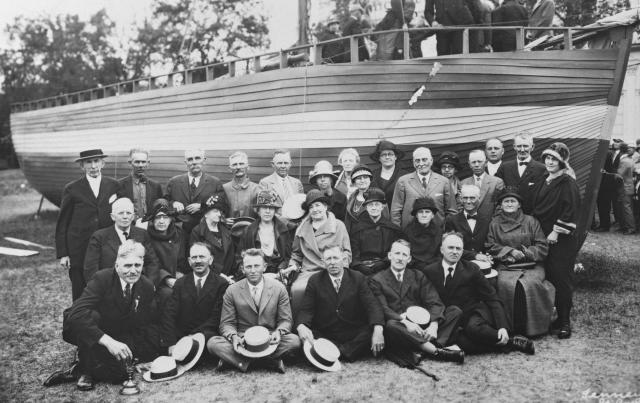 Around 1905, when Norway would have been considered a “shithole,” my great-grandmother sailed to the United States. She was 16 years old, without family and money, and found work as a house cleaner. My great-grandfather was a Norwegian sailor who jumped ship and just started living in Chicago.

Fortunately for me, the immigration laws we had then let them get green cards and earn citizenship. My mother recounts her grandparents as kind and decent, suffering humiliation and enduring hardship to provide opportunities for their children. They were frugal and bought a house. Both of their sons served in WWII; one was shot down and was a POW. Their granddaughter, my mother, was the first in their family to attend college.

Their story, an immigrant story, exemplifies the American dream.

Our immigration laws have been a bit more complicated. We have a restrictionist past, having excluded people based on race and nationality, including people from China, Japan and Italy. The country moved to rectify these exclusionary policies with the passage of the 1965 Immigration and Nationality Act.

We have also had important chapters in our immigration story when we calculated “merit” properly: not by measuring a person’s worth based on what they lacked upon their arrival, but by valuing the future contributions that arise from their hopes, grit and gratitude.

Over two decades ago, Congress passed a law that changed that calculus. In the same month that he cravenly appealed to the right by “reforming” welfare and signing DOMA, former President Bill Clinton also signed the Illegal Immigration Reform and Immigrant Responsibility Act of 1996.

IIRIRA was neither a solution to an existing problem nor a pragmatic compromise. Rather, the Republicans wanted to look tough on immigration, and the Democrats were afraid to look soft, despite knowing the law was bad policy. The law closed many doors that used to let people stay. Previously, someone who crossed the border earned a green card if they had spent seven years paying taxes, demonstrated good character and proved a citizen needed them here. For those who married citizens, they got status if they paid a $1,000 fine. IIRIRA instead elevated a border crossing into an unforgivable sin, deporting the same people who used to get green cards.

If that law had been in place in 1905, both my great-grandparents would be “illegal” — one overstayed her visa, the other crossed a border without one. My great-grandparents would be placed in detention and scheduled for immediate deportation, likely without a hearing. The old immigrants did not have superior character; our laws just were not captured by right-wing talking points.

The old immigrants did not have superior character; our laws just were not captured by right-wing talking points.

With his “shithole” comments earlier this month, President Donald Trump exposed the moral deficiency and logical fallacy of IIRIRA’s restrictionism. But Republicans defend it with politer language ― think “merit,” “chain-migration,” and “self-deportation” ― and Democrats continue to acquiesce with spineless silence.

What the immigration hard-liners get wrong is that it is this heightened, senseless immigration enforcement, not legal or “illegal” immigrants, that is hurting our country.

Immigration violations often involve minor and unintentional conduct, and are intended to be forgiven. When someone breaks a criminal law, they are convicted, punished and could face a lifetime of collateral consequences arising from being a felon. But when someone violates immigration law, they appear before an immigration judge, and will sometimes be given (or restored with) a green card or asylum status.

Half of the people who get immigration hearings are granted legal status. For those with attorneys, that number is much higher: in 2017, in one courthouse that found a lawyer for every detained case, the grant rate went from 4 percent to 24 percent, and is predicted to be 77 percent when all pending cases are counted. A national study of 1.2 million cases showed that, for those outside of detention, grant rates went from 13 percent to 63 percent if the non-citizen had an attorney. The more accurate term would be “pre-legal” not “illegal,” immigrants.

The term “illegal immigrant,” however, serves to justify billions of dollars spent on arresting, detaining and deporting people who sound dangerous. Under former President Barack Obama, the federal government spent $18 billion each year on immigration enforcement.  By contrast, the agencies targeting actual criminals — the FBI, DEA, Secret Service, and ATF — got only $14 billion.

Trump wants to spend billions more — each year — on more arrests ($1.3 billion more on new officers), more detention centers ($1.5 billion increase over the $2 billion currently spent), and more wall (starts at $21.5 billion and estimates are as high as $67 billion). There simply is no justification for this amount of wasted money.

While Trump’s crackdown that has resulted in a 40 percent increase in immigration arrests, fewer than 6 percent have any criminal conviction. And among those with convictions is the Polish doctor with a green card whose misdemeanor offenses were decades old.

Across all sectors, our economy will not thrive or grow without immigrants: rural hospitals face a shortage without foreign-born doctors. Up to 50 to 70 percent of farm-workers are undocumented. Society Security will be insolvent unless more immigrants live in our country. And Trump’s current immigration crackdown is proving that immigrant deportations do not create a single American job.

The term ‘illegal immigrant’ serves to justify billions of dollars spent on arresting, detaining and deporting people who sound dangerous.

To the contrary, it is costing tens of thousands of Americans their livelihood: a labor shortage is “choking” Idaho’s dairy industry, lost tourism has resulted in 40,000 layoffs, and a decline in foreign students is forcing numerous colleges to cut programs and faculty. Immigration hard-liners wish to spend $400 billion to $600 billion to deport a population that is expected to contribute over $5 trillion to our economy in the next 10 years. That’s the party of fiscal responsibility?

What Trump’s rhetoric, and IIRIRA’s deeds, miss most with their attack on immigrants is that being American is both a noun and a verb. I first became patriotic when, as an immigration lawyer, I saw my own country through the eyes of my clients: A Yemeni Muslim shared with me how much fun he and his wife had attending their first gay pride parade. A Salvadoran teenager who was granted asylum after fleeing gangs asked how he could enlist in the U.S. military. A Mexican man and his wife raised a child as their own after the biological parents had left the child for an intended temporary period that became 15 years.

People who want to curb legal immigration based on “merit” fail to understand that immigrants — skilled and unskilled — contribute character, values, and economic growth that our country needs as much today as it did in 1905.

If a state stopped issuing driver licenses, there would be a sudden glut in “illegal drivers.” A state then could either try to arrest and jail all of them, blow up the highway for all drivers, or just start re-issuing licenses as they had in the past. These are the same choices we have in immigration. Waves of “illegal immigrants” did not and are not scrambling over the border.  The undocumented population more than doubled when IIRIRA irrationally cut off all means for people who were already in this country a chance to get status.

This piece has been updated with additional information on the history of U.S. immigration laws.