Lake Mead’s water levels this week dropped to historic lows, bringing the nation’s largest reservoir less than 150 feet away from “dead pool” — when the reservoir is so low that water cannot flow downstream from the dam.

Lake Mead’s water level on Wednesday was measured at 1,044.03 feet, its lowest elevation since the lake was filled in the 1930s. If the reservoir dips below 895 feet — a possibility still years away — Lake Mead would reach dead pool, carrying enormous consequences for millions of people across Arizona, California, Nevada and parts of Mexico.

“This is deadly serious stuff,” said Robert Glennon, an emeritus professor at the University of Arizona who specializes in water law and policy.

Persistent drought conditions over the past two decades, exacerbated by climate change and increased water demands across the southwestern United States, have contributed to Lake Mead’s depletion. Though the reservoir is at risk of becoming a dead pool, it would most likely take several more years to reach that level, Glennon said.

In the meantime, the U.S. Bureau of Reclamation and water managers across the southwestern United States are making efforts to manage the flow of water into the Colorado River and regulate water use among states in the region. These measures are designed to help replenish Lake Mead, which was created on the Colorado River on the Arizona-Nevada border when the Hoover Dam was built in the early 1930s, and another severely depleted reservoir, Lake Powell, which was created along the border of Utah and Arizona. 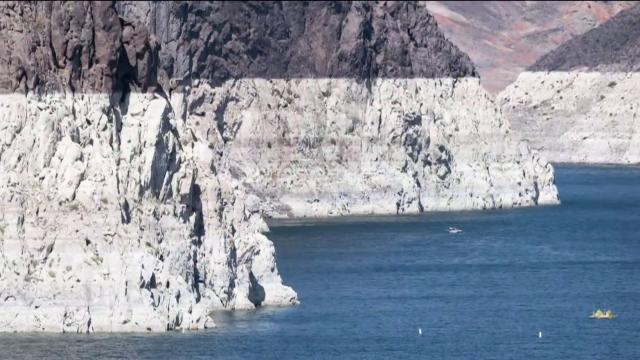 Dead pool would not mean that there was no water left in the reservoir, but even before Lake Mead were to hit that point, there are concerns that water levels could fall so low that the production of hydroelectric power would be hindered.

“Electricity generation in our western reservoirs becomes a problem as the water level in the reservoirs goes down,” Glennon said.

As a reservoir is depleted, there is less water flowing through turbines and less liquid pressure to make them spin, which means the turbines produce less electricity, he added.

Glennon said water levels at Lake Mead have seen unexpectedly significant declines in recent years. At roughly this same time last year, Lake Mead’s elevation was measured at around 1,069 feet, according to the Bureau of Reclamation. In 2020, water levels at the end of June were around 1,087 feet.

Glennon said the situation at Lake Mead is forcing local officials to take “dramatic steps” to replenish the reservoir, particularly as climate change is expected to worsen drought conditions in the West and will continue to affect how much water flows into the Colorado River.