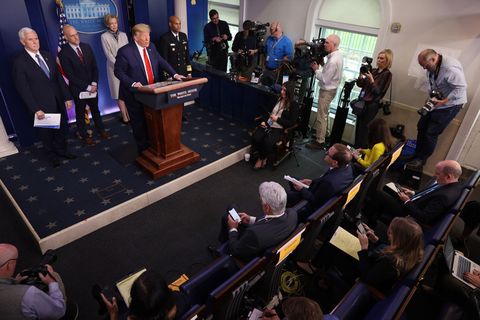 The now-daily gathering of the Coronavirus SuperFriends on Thursday took the express bus to Crazytown, perhaps never to return. This is because they insist on telling El Caudillo del Mar-A-Lago where the briefing is and at what time it will be held. Can’t someone just lie to him about all that? First, out of the clear blue nowhere, the president* began promoting the use of the anti-malarial drug chloroquine as a possible therapeutic for COVID-19. This came as some surprise to the Food and Drug Administration, whose director was also on the dais today. From Bloomberg:

The drug, chloroquine, hasn’t yet been approved for treatment of Covid-19, the disease caused by the new coronavirus. While it’s been available for decades for malaria, it’s not clear whether it will work against the new illness. A March 10 review of existing research found that there’s little solid proof one way or the other. During an at-times-confusing White House press conference, Trump said that chloroquine was approved for use and that he wanted to “remove every barrier” to test more drugs against Covid-19 and “allow many more Americans to access drugs that have shown really good promise.” “Normally the FDA would take a long time to approve something like that, and it’s — it was approved very, very quickly and it’s now approved by prescription,” Trump said. An FDA spokesperson said the drug had not been approved for use in Covid-19 patients. However, U.S. doctors are legally able to prescribe a drug for any illness or condition they think is medically appropriate.

At Thursday’s press conference, Trump and FDA Commissioner Stephen Hahn appeared to differ substantially about the status of the drugs being tested. Trump said chloroquine had been approved and could be given to patients by doctors with a prescription. “It’s been around for a long time, so we know that if things don’t go as planned it’s not going to kill anybody,” Trump said. Shortly thereafter, Hahn said that use of the drug would be in a controlled trial to find out whether or not it works, and if so, what dose would be safe and effective. “We want to do that in a setting of a clinical trial,” Hahn said.

Good god, get the hook.

But the presser didn’t go zooming off the rails until a “reporter” named Chanel Rion from One America News, the outlet that the president* watches when Fox News gets too Chomsky for him, chimed in from the izonkosphere:

On that note, major left-wing media, including some in this room, have teamed up with Chinese Communist Party narratives and they’re claiming you’re a racist for making these claims about Chinese virus. Is it alarming that major media who just oppose you are consistently siding with foreign state propaganda, Islamic radicals, and Latin gangs and cartels, and they work right here in the White House with direct access to you and your team?

This gave the president* his cue to go off on a rant about how the Fake News is keeping the country from throwing him the parade his performance in office is due. It’s past time for the networks to decide whether or not these exercises in executive wankery are harmful to the general effort against the pandemic. It’s time to quarantine the Crazy.