As the war in Ukraine rages on, a defiant Ukrainian General has sent out a stark warning to Russian troops entering the country.

Vladimir Putin’s soldiers in Mykolaiv, a key staging post for control of the Black Sea, have been met with fierce resistance, putting an early end to Russia’s attempt at advancing.

General Dmytro Marchenko, of Ukraine’s Armed Forces, has now told The Times that Ukrainian resistance is not phased by Russian soldiers continuing with their bombardment.

He said: “It’s unpleasant to say this but their corpses are food for stray dogs.

“We’re not able to retrieve them because of continuing Russian fire in those areas.”

Marchenko insisted that Ukrainian troops “won’t shoot any Russian soldiers who give up” but warned: “The rest of them will become dog food.”

While troops have been forced to a retreat in Mykolaiv, Vladimir Putin continues his deadly onslaught in other parts of the country – including striking at maternity hospital in the besieged port city of Mariupol.

Ukrainian president Volodymyr Zelenskyy condemned the strike as an “atrocity” and reiterated his call to Western nations to impose a no-fly zone. 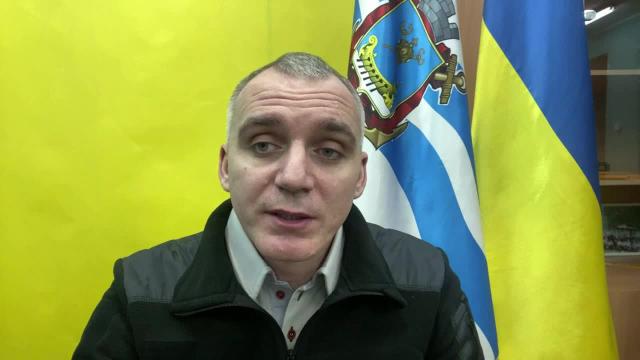 Boris Johnson described the attach as “depraved” and said the UK was considering more support for Ukraine to defend itself against airstrikes.

Mariupol deputy mayor Sergei Orlov said this morning that at least three people had been killed in the strike, including a six-year-old child.

Around 17 people were reportedly injured in the strike against the hospital, where the vast majority of patients are pregnant women – many of whom were in labour.

Defence minister James Heappey accused Russia of committing a war crime by striking the hospital, telling BBC Breakfast this morning: “We ask ourselves the question how did this happen? Was it an indiscriminate use of artillery or missiles into a built-up area, or was a hospital explicitly targeted?

“Both are equally despicable, both, as the Ukrainians have pointed out, would amount to a war crime.”

Pressed on whether he thinks the attack constitutes a war crime, he replied: “Yes, if you deliberately target a piece of civilian infrastructure like a hospital, yes.

“If you use indiscriminate artillery into an urban area without due regard for the reality, you could hit a protected site like a hospital, then that too in my view is.”

President Zelenskyy posted footage online showing the damage from what he said was a “direct strike” on the hospital, with windows blown out and debris strewn through the corridors.

In a call on Wednesday evening, Johnson joined Zelenskyy in condemning the strike, noting that this, together with reports Russian forces had failed to respect ceasefire agreements, was “yet further evidence that Putin was acting with careless disregard for international humanitarian law”, Downing Street said.