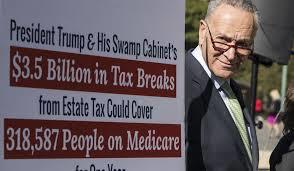 Why would they want to do that?

Today’s article in a Forbes oped contributor blog post describes how the current GOP tax bills are “the end of GOP economic sanity” and goes through a long list of problems that would never have been inflicted on the US populace before:

“If it’s enacted, the GOP tax cut now working its way through Congress will be the start of a decades-long economic policy disaster unlike any other that has occurred in American history.”

“There’s no economic justification whatsoever for a tax cut at this time. U.S. GDP is growing, unemployment is close to 4 percent (below what is commonly considered “full employment“), corporate profits are at record levels and stock markets are soaring. It makes no sense to add any federal government-induced stimulus to all this private sector-caused economic activity, let alone a tax cut as big as this one.”

After going through a list of problems it will cause, such as high inflation which monetary policy will no longer be able to affect, they come to this:

Without massive cuts in Social Security, Medicare and the Pentagon, it won’t be possible to reduce federal spending enough to do more than tweak the deficit.

And there it is. The only option that will be available to ameliorate the significant problems these tax cuts will cause is to cut these parts of the budget. None of the other options is feasible. And the Pentagon budget is sacrosanct. That leaves Social Security and Medicare.

This was a goal of the invasion of Iraq- explode the debt and deficit to the point where cuts to entitlements are the only solution. But that was staved off with a democratic president. And now we are back to square one. Only this time the super rich get a massive windfall in the bargain.

This is what they have wanted for decades. They have had their eyes on the prize and they see it getting closer and clearer. This won’t be an unintended consequence- it is the plan. The goal.

And the gall to try and sell a measly tax cut of a few hundred dollars as a boon for the “middle class”.

I’m sure Democratic legislators are well aware of this. My question- is it taboo for them to engage on this subject? 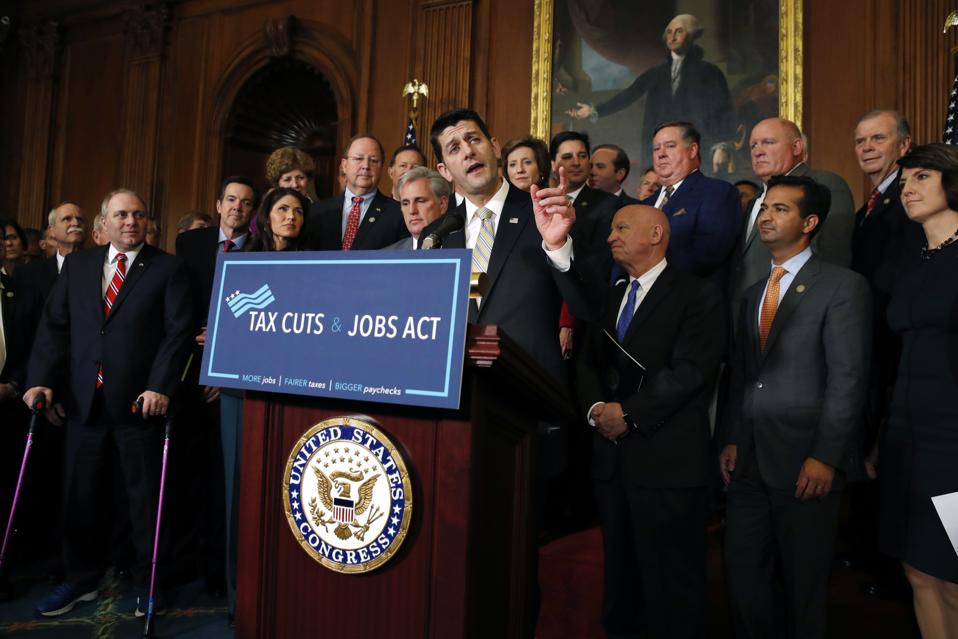 No doubt many of you read the above headline and immediately started to tweet that the GOP tax bill can’t be the end of economic sanity in Washington because there never was any to begin with.

I have two responses.

Second…you’re wrong. If it’s enacted, the GOP tax cut now working its way through Congress will be the start of a decades-long economic policy disaster unlike any other that has occurred in American history.

There’s no economic justification whatsoever for a tax cut at this time. U.S. GDP is growing, unemployment is close to 4 percent (below what is commonly considered “full employment“), corporate profits are at record levels and stock markets are soaring. It makes no sense to add any federal government-induced stimulus to all this private sector-caused economic activity, let alone a tax cut as big as this one.

This is actually the ideal time for Washington to be doing the opposite.  But by damning the economic torpedoes and moving full-speed ahead, House and Senate Republicans and the Trump White House are setting up the U.S. for the modern-day analog of the inflation-producing guns-and-butter economic policy of the Vietnam era. The GOP tax bill will increase the federal deficit by $2 trillion or more over the next decade (the official estimates of $1.5 trillion hide the real amount with a witches brew of gimmicks and outright lies) that, unless all the rules have changed, is virtually certain to result in inflation and much higher interest rates than would otherwise occur.

The GOP’s insanity is compounded by its moving ahead without having any idea of what this policy will actually do to the economy. The debates in the Ways and Means and Senate Finance Committees and on the House floor all took place before the Congressional Budget Office’s analysis and, if it really exists, the constantly-promised-but-never-seen report from the Treasury on the economics of this tax bill.

Meanwhile, Congress has ignored other estimates like this one from the University of Pennsylvania’s Wharton School showing that the tax bill won’t do what the GOP is promising.

In other words, the GOP tax bill may be enacted without anyone who votes for it having any understanding of the damage it could do to the economy. They have wishes, hopes and prayers but in reality nothing beyond the economic equivalent of pagan superstition.

On top of everything else, there is no reason to rush this debate as the GOP is doing. Given that it’s not really needed, a bill that is enacted next January or February will make as much economic sense as one signed into law by the end of this December. The must-do-it-by-Christmas deadline Trump has imposed is completely artificial and nonsensical.

The real economic insanity of the GOP’s tax bill will be felt in future years. Consider the following.

In other words, if the GOP tax bill is enacted, Congress and the president this year will give up almost all ability to deal with the U.S. economy for at least a decade even when, as almost certainly will happen, there’s a downturn. No one else will be able to fulfill this role.