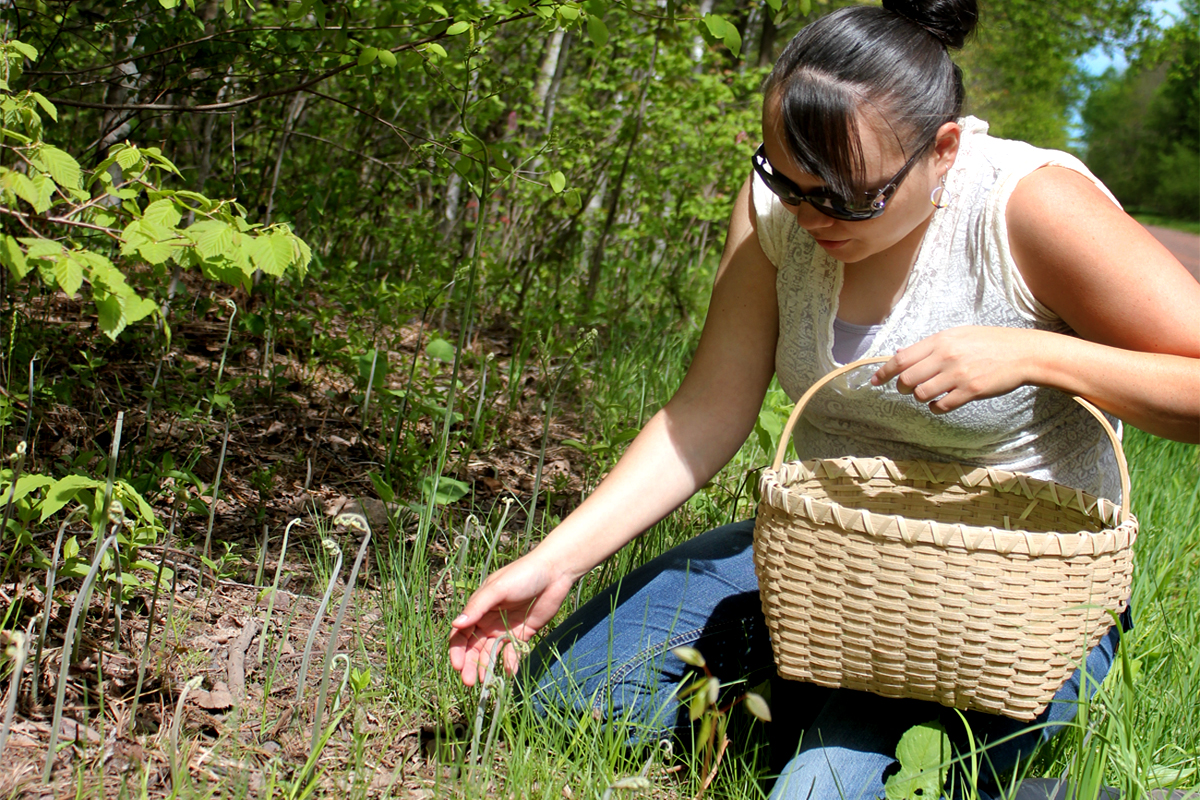 Several times a year, the locals at Orleans, California see a surge of sport fishermen and trophy hunters come through town, driving big trucks decked out in camouflage and sporting polarized fishing sunglasses.

The locals, including some of the Native people from tribes in the Klamath Basin, have to enter the same lottery and buy the same hunting permits as the outsiders who may or may not see the cultural and nutritional value of the animals they are harvesting. For some Native people, including Lisa Hillman, seeing their food treated in this way was an unpleasant shock.

“It makes me want to turn away,” Hillman said. “Otherwise I might say something I shouldn’t, as a mother and as a leader in the community.”

Study after study has shown that access to healthy food is critically low in Native communities across the U.S. In Orleans, a small, unincorporated town with limited resources, Native people have a hard time accessing food, let alone traditional, indigenous food.

A new study from Hillman, a member of the Karuk tribe and the manager of its Píkyav Field Institute, and colleagues from U.C. Berkeley’s Department of Environmental Science, Policy, and Management, explores the profound lack of food access among tribal members in the northwestern corner of California.

Over the course the last five years, the researchers received more than 711 survey responses, conducted 115 follow-up interviews, and worked with 20 focus groups to determine the food access challenges that members of the Karuk, Yurok, Hoopa, and Klamath tribes face. The study found that 92 percent face at least some level of food insecurity—compared with 11.8 percent of all U.S. households.

“We only have one highway,” Hillman said about Orleans, a hub for the Karuk tribe with a population of 600. “Getting food here is really difficult,” she said, and the nearest grocery store is a two-hour drive away.

The study also showed that essentially everyone who participated wants more access to indigenous foods, but they first have to overcome limited access, regulations, and a legacy of colonialism to eat the food that has been part of their tribal identity and culture since before colonization.

“It was just astounding how widespread these feelings of loss, need, want, and frustration were in our area and across the tribes,” said Hillman.

Sixty-four percent of Native households in the area rely on food assistance, including the Supplemental Nutrition Assistance Program (SNAP) and the Food Distribution Program on Indian Reservations, sometimes called commodities or “commods.” And 21 percent of those households reported using these food assistance programs because Native foods weren’t available. About 40 percent of participants said they rely on Native foods for food security.

It wasn’t always like this; 84 percent of people didn’t used to run out of food or worry about running out of food in the past. Traditionally, indigenous people in the Klamath Basin lived off of an abundance of wild game and fish, nuts, berries, and herbs. They also had unlimited access and the practical and cultural knowledge to gather, cook, and preserve these foods. 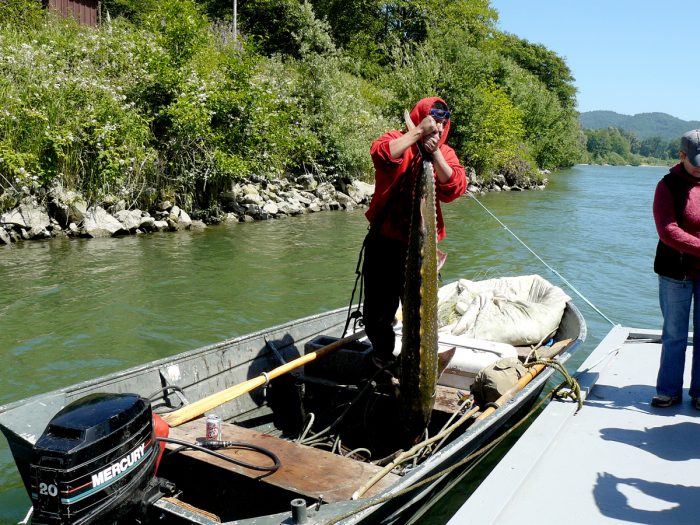 A sturgeon caught by Yurok fishermen on the Klamath River. (Photo CC-licensed by DocentJoyce on Flickr)

Tribal members face a number of barriers that have cropped up over the last 170 years as a result of the California Gold Rush, forced assimilation, broken treaties, and changing land jurisdictions. Their traditional territory is massive compared to the tiny pieces of land now known as reservations.

The Karuk don’t technically have a reservation. They have multiple, small sections of land held in trust by the government. The Hoopa Valley Tribe has a small reservation, which includes a section of the Trinity River. The Yurok reservation stretches 44 miles along the Klamath River from the Pacific Ocean to the town of Weitchpec and meets the Hoopa Valley Indian Reservation. Similar to the Karuk tribe, the Klamath Tribes (Klamath, Modoc, and Yahooskin) have land held in trust by the government that is spread across Klamath County.

“We aren’t ‘allowed’ in the eyes of the federal government to do these things,” Hillman said. “We have to apply for a permit to hunt our own Native species that we’ve hunted for a long time and managed for a long time before somebody decided this was their land.”

Salmon is always a hot-button issue in the Klamath Basin. Salmon populations are most affected by dams and the Hoopa Valley Tribe has been in a decades-long legal battle with California and Oregon to get four hydroelectric dams on the Klamath River removed.

“We haven’t had access to the fish that we’ve had access to for decades,” Hillman said. This year, the Karuk Tribe put tighter restrictions on salmon fishing and the tribe is petitioning the California Fish and Game Commission to list Spring Chinook as a protected species.

“We have to go off of the reservation, so basically, they call us outlaws, poachers, whatever. We’re not poachers or outlaws. We are providers. Native man is a provider,” according to one confidential interview highlighted in the study. “He goes out and he gets food for his family. He ain’t out there looking for trophies. He’s looking for meat to feed his family … The Creator give us these animals so we can live. Now you got to go buy a ticket, a tag, a license to go out and be who you are.”

According to the study, 7 percent of Native households said they are Native food secure, meaning they have access to indigenous foods like pine nuts, acorns, chestnuts, huckleberries, elderberries, wild potatoes, wild mushrooms, eels, salmon, sturgeon, and deer, to name just a few. The study also finds nearly 83 percent of households consumed Native foods at least once in the past year and that there is a strong desire—according to 99.56 percent of survey respondents—to have more access to these foods. 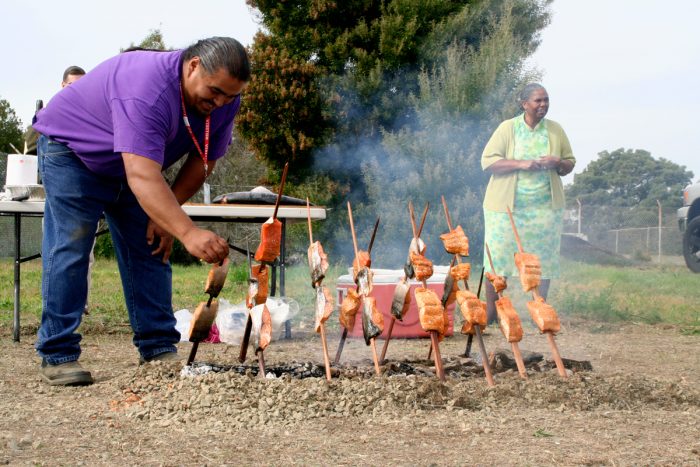 These findings led the report authors to make a number of recommendations to better reflect Native food needs in future food insecurity studies. In addition to recommending the USDA factor in Native foods and travel to far-distant stores to use SNAP or WIC in future studies, researchers would like state and federal agencies to strengthen hunting and fishing rights, promote tribal stewardship to the land and natural resources, and increase funds for tribal education, research, and extension programs.

“Really, food is at the core of everything we do, who we are. It’s our identity,” Hillman said. “We’re really trying to get it [Native food education] back into the schools, because that’s where we can sort of bridge that knowledge gap.”

The Píkyav Field Institute has developed a K-12 curriculum that includes Native food in every lesson. The children take field trips to collect acorns and learn food origin stories.

In food workshops, for example, Baldy will combine fresh canned salmon using local fish with kale and leeks from the garden. Or she’ll make traditional huckleberry jams and jellies and dumplings with Food Distribution Program ingredients.

“I always tell the kids that ‘Now you’re connected to that jar of jam. When you open it, you’ll be connected back to all of us,’” she said.

Establishing that deeper connection with food, its stories and culture is what Baldy’s work is all about. She’s also working to get restrictive food policies changed.

“To us, traditional gathering is ‘agriculture,’” Baldy said. “It’s getting that [through] to the USDA.”

She sees some light at the end of the tunnel. With 60 provisions in the 2018 Farm Bill concerning tribes, such as more support for locally grown and produced foods and more tribal management of the Food Distribution Program on Indian Reservations, tribes have fodder to continue writing the beginning chapters of their tribal food sovereignty stories.

“We want to have economic development in our communities and sustainable agriculture, but we need to get rid of barriers,” Baldy said.