This Christmas will be the third one I haven’t spent in my hometown. It’s a small town in southern Kentucky filled with more than its fair share of Donald Trump bumper stickers and Confederate flags. But even before Trump was elected president, it always made me feel claustrophobic.

The end of this holiday season will also cap the second calendar year I’ve gone without speaking to my parents, and by extension, the rest of my family. My holidays are no longer spent at my grandparents’ house with my parents, sister, uncle and random cousins. My parents helping to put Trump in office was the final nail in the coffin of a relationship that had long been rocky.

And despite people’s well-intended (but unnecessary) sympathy, life has never been happier for me.

My parents are passionate conservatives and attempted to raise me as a Baptist (I knew early on that wasn’t going to work for me). My parents complained about everything from interracial marriage and rap music to women going for summer jogs in shorts they believed to be too short. My mother literally highlighted Bible passages she claimed “proved” Barack Obama was the Antichrist. When NFL draft pick Michael Sam kissed his boyfriend on live TV, I nearly cried. I grew up in a house full of sports fanatics and this was a beautiful ― and groundbreaking ― moment. My parents only talked about how “gross” it was.

Because of my family’s beliefs, I spent most of my life hiding my politics, my interests, my dating life and my friends from them. For decades, they didn’t know the real me, only the facade that I put on for them. My parents had no idea that when I left the house on a typical high school weekend night, I was probably spending time with my gay best friend. They didn’t know I voted for Obama (shocker ― he didn’t turn out to be the Antichrist). They didn’t know I donated to Planned Parenthood. Almost everything I love or am proud of in my life would probably make them cringe. 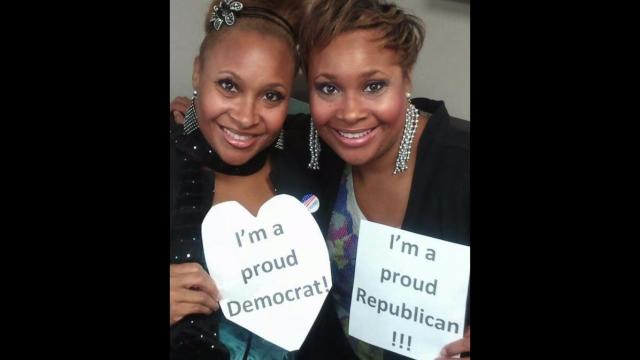 Holidays always seemed to exacerbate the canyon that yawned between us and, for as long as I can remember, my anxiety has spiked during November and December. A chronic eye-roller, I had to siphon every bit of self-containment I could to make it through Thanksgiving and Christmas dinners ― and daily life, if I’m being honest ― with my family.

Because of my family’s beliefs, I spent most of my life hiding my politics, my interests, my dating life and my friends from them. … Almost everything I love or am proud of in my life would probably make them cringe.

Eventually I came to realize our vastly different beliefs had little to do with “politics,” a blanket descriptor often used in situations like this that greatly oversimplifies the rift between my family and me. Our differences have to do with vastly opposing views of what every human being deserves (health care, LGBTQ rights, a world without Confederate flags, etc). Trump being elected ― and my parents helping him with their votes ― was more than I could take. It was the wake-up call I needed, and it finally shook me free from the society-imposed guilt that kept me hanging onto my family ties for years.

The day after the 2016 election, my mother and I had a heated discussion on the phone ― the first extensive one we’d had about politics in years. She proudly declared her support for Trump and said my dad had voted the same way. I hung up. I always knew my parents were wildly conservative, but in my heart of hearts, I didn’t think it would go this far.

I let the anger linger in silence for a couple of weeks. By the time my parents realized I wasn’t contacting them anymore, I had gathered all my thoughts. My dad finally called, wondering why I was freezing them out. I was on my way to Kansas City at the time and had an uninterrupted 45 minutes while driving to deal with the situation. After that? I knew I would be done. I was at peace.

So I drove down Interstate 70, my phone to my ear, and finally let 23 years of differences bubble up into speech. I was the most open I’d ever been with either of my parents. I told my father, for the first time, about how I’d been groped on a New York City street. How could he vote for a man who had admitted to doing the same to other women? I brought up our differences when it came to topics like race, religion and women in leadership positions. It probably wasn’t a complete shock to them ― I’ve often slipped throughout the years and said “liberal” things. But I don’t think my parents ever knew our differences were this severe or would signify the end of our relationship.

In most arguments I engage in, my temper comes quickly. I get flustered, and I often cry when I’m frustrated. But this was the calmest I’d ever been during a confrontation. I never cried. I never yelled. I didn’t have to. We knew it was over.

Since that day, I’ve spoken to my parents only once. I showed up at their door with two boxes a couple of months later and went straight to my old room to collect whatever I might someday want to keep. My mom followed me down the hall, berating me about how “ridiculous” I was being. The entire interaction lasted about 10 minutes as I grabbed photos off the wall and old books I thought I’d want. I took what I could because I knew I wouldn’t be back. The saddest goodbye was to the family dog, Zoe. Every other separation was a long time coming.

It’s strange ― with romantic attachments, we’re taught to recognize the red flags and act accordingly. … But with our family relationships, we’re often guilted into staying no matter how toxic the situation.

It’s strange ― with romantic attachments, we’re taught to recognize the red flags and act accordingly. We’re told, “Remember your worth” and “Being alone is better than being in a bad relationship.” We’re told, “Get out if someone doesn’t respect you or your beliefs.”

But with our family relationships, we’re often guilted into staying no matter how toxic the situation. We’re pressured into trying to make it work with people who are often viscerally at odds with everything we believe in ― because it’s the “right” thing to do.

So, after years of dreading the holidays, I finally took control of my life and created my own version of home ― of family.

Last year, I crammed 15 of my friends into my tiny living room and hosted my first Friendsgiving in my own place. Some of my friends were gay. Some were black. One had parents who immigrated from Mexico. It was a hodgepodge of characters and identities, a mosaic that illustrated what already makes America great. And I knew that no one there would make racist or sexist comments while digging into their turkey. No one would claim Jay-Z was a devil worshipper (I actually witnessed this at a family gathering). No one would (unironically) talk about how nice of a guy Ted Cruz seems to be.

I didn’t have to feel anxious and I didn’t feel anxious. It was the first time on a holiday I’d ever truly felt at home.

This year, I took a week before Thanksgiving and drove eight hours back to the region where I grew up. Toggling between Kentucky (Louisville and Lexington) and Indianapolis, Indiana, I crashed in my friends’ studio apartments and spare rooms, drinking wine and revisiting old college haunts.

But at the end of the week, I turned south. I drove back to my hometown, rolled down the main bypass and straight through the traffic light that, had I turned left, would have taken me to the house I grew up in. I wasn’t there to see my parents. I wasn’t there to silently sit on a couch surrounded by relatives I had nothing in common with but my genes.

When people find out I’ve cut my family out of my life, they often apologize, and ask if I’m sad. But I’m not sorry, and I’m even less sad. My parents, unfortunately, brought me more stress and grief than anyone else in my life.

I drove back there not to see relatives, not to fight a losing battle, but to spend time with those who actually felt like family.

My best friend from high school and her husband hosted me for two days and made me an early Thanksgiving dinner. We sipped Kentucky bourbon and talked into the night about politics and old friends. I tried to explain all of Drake’s rap beefs, and we laughed in a way I wasn’t used to laughing during the holidays. This was the kind of Thanksgiving I’d been missing all those years: no anxiousness, no bitter fighting, no quiet resignation to just keep my head down and find a way to get through the meal.

When people find out I’ve cut my family out of my life, they often apologize and ask if I’m sad. But I’m not sorry, and I’m even less sad. My parents, unfortunately, brought me more stress and grief than anyone else in my life. Naturally, there are days I mourn the absence of strong family ties. But I certainly don’t mourn the loss of my own toxic family ties.

Avoiding Trump voters was the impetus for me to finally break away. But the journey was building my own happiness ― free of an arbitrary obligation to a family I not only had nothing in common with but whom I actively disagreed with on fundamental issues that illustrate who we are as people.

It’s not a situation I would wish on someone ― of course, there are times I wish I had blood relatives I was close to. But the peace of mind and the happiness I’ve found these past couple of holiday seasons without my family? I would wish that joy on everyone.

Ashley Scoby is a native Kentuckian, a University of Kentucky graduate and a recovering sports writer. She’s now a freelancer living in Kansas City, Missouri.

Do you have a compelling personal story you’d like to see published on HuffPost? Find out what we’re looking for here and send us a pitch!