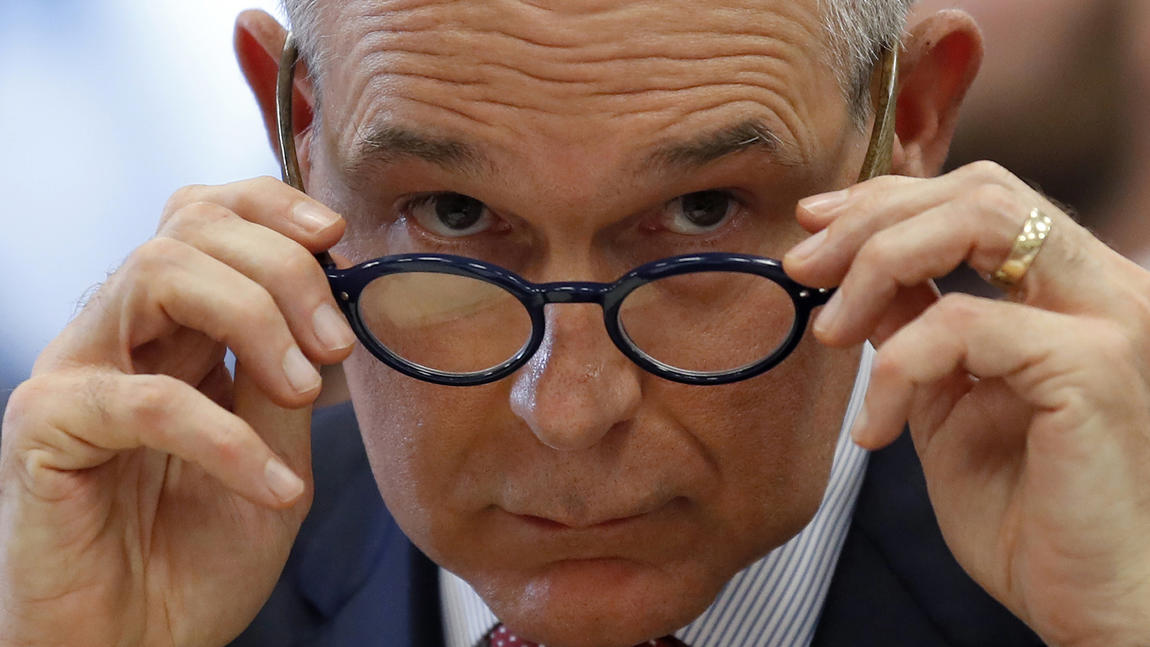 In this April 26, 2018, photo, Environmental Protection Agency Administrator Scott Pruitt removes his glasses as he testifies at a hearing of the House Appropriations subcommittee for the Interior, Environment, and Related Agencies, on Capitol Hill in Washington. (Alex Brandon / AP)

The lobbyist whose wife rented a condo to Environmental Protection Agency head Scott Pruitt at $50 a night sought EPA committee posts for a lobbying client, according to a newly released EPA memo.

J. Steven Hart’s seeking those appointments from his wife’s former tenant, Pruitt, shows “the extent to which the special interests providing him with gifts have sought specific favors from EPA in return,” said Rep. Frank Pallone of New Jersey, the senior Democrat on the House Energy and Commerce Committee.

The memo makes for the latest in a months-long barrage of news reports and federal investigations questioning spending and other actions at Pruitt’s EPA. Pruitt’s former security chief, whose time with Pruitt saw the EPA administrator provided with round-the-clock security and first-class flights in the name of security, was due to appear for an interview with staff on the House Oversight and Government Reform Committee on Wednesday.

The New York Times first reported the new memo from Hart, the lobbyist.

“I want to highlight three candidates…who were nominated by our client, Dennis Treacy, the president of the Smithfield Foundation,” Hart wrote, suggesting appointments for the three to an EPA science advisory board.

The foundation is an arm of Smithfield Foods Inc. of Virginia, known for its hams. Smithfield Foods paid at least $280,000 in lobbying fees in 2017 to Hart’s firm, and Hart was listed by name as representing Smithfield as its lobbyist when he wrote the email, according to federal lobbying records.

Asked if the request represented a conflict of interest for Pruitt, the EPA provided a statement from Jackson that did not address that question directly. The suggestions were among hundreds the EPA received for the board, and the three people suggested by Hart were not appointed to the advisory board, Jackson said in the statement.

Pruitt told Fox News in April that, “Mr. Hart has no clients that had business before this agency,” but a spokesman for Hart subsequently acknowledged that Hart actually met with Pruitt in his office in July 2017 — about one month — before Hart’s proposed nominations to discuss efforts to preserve the Chesapeake Bay.

Pruitt’s assertion had been in response to questions about the propriety of his leasing the condo, at a bargain rate, from Hart’s wife.

Pallone, the lawmaker, called the August email “further proof that Administrator Pruitt has consistently misled Congress and the public.”